A very wide two-lane road with equally wide shoulders, it was only 10 miles from Las Vegas but could have been 100. I found McGhies Blue Diamond Bikes which rented Trek Bikes.

I asked the owner how to get to Red Rock Canyon. The bike didn’t have a computer. He simply sized me up and said ride for 30 minutes then turn left. At 8 miles or 16 miles per hour, mostly climbing, he was right.

The road turned up and my breathing labored. I was surprised to see that the scenic road within the park was almost a mile high.

It made for a nice downhill ride going back. I saw two wild burrows, or I saw the same one twice. Not sure. But it’s a great way to spend a day in Vegas. 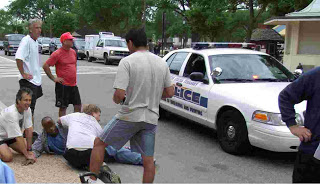 WASHINGTON, DC
I keep a “throw-away” bike at work which I can use to ride at lunch or more often, ride to the Mall to play Ultimate Frisbee with our lunchtime crowd. There are a number of us who ride to the game and generally the bikes are parked together. Most are locked but some are not.
My bike is usually locked with a cable but a couple of days earlier Steve Darragh had borrowed the bike lock. No big deal. 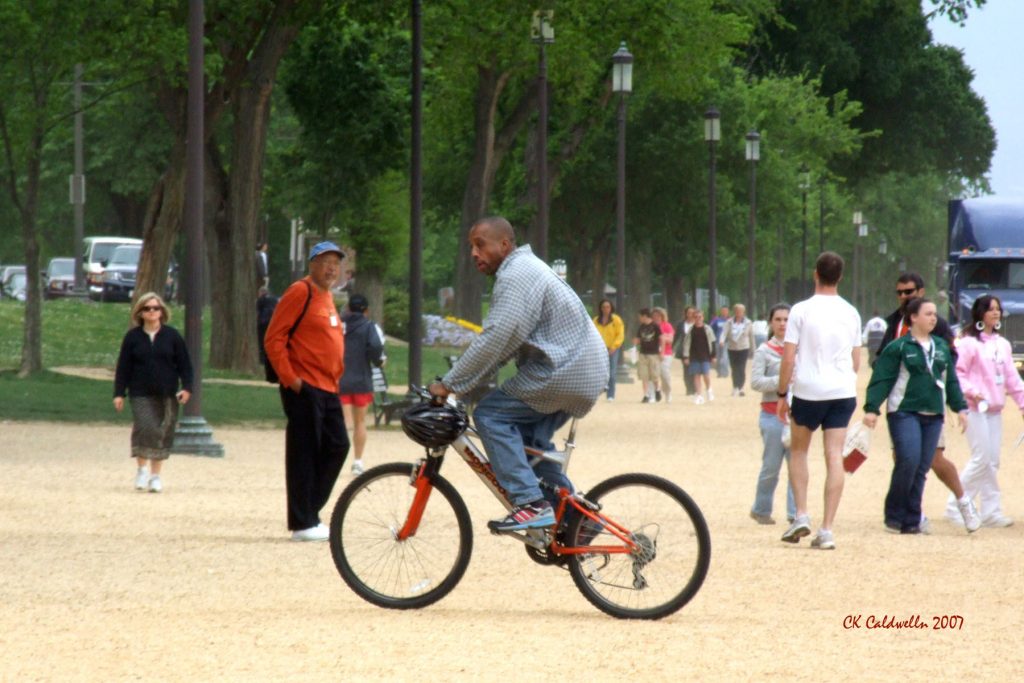 During the game I saw a man walk by our bikes which were parked beside a heavily-traveled pedestrian walkway. He looked at our bikes then turned to watch us play. I turned to make a play then looked again and I saw the back of him on my bike taking off with it.
All of a sudden, I decided I wasn’t quite ready to lose my throw-away bike. “Hey!” I screamed. “Get off my bike!” Foolishly, I sprinted to catch up to him to knock him off my bike. He looked and saw that I was in pursuit, some 40 yards away, and decided to out sprint me. Thankfully, my equally foolish friends realized what I was doing and ran after me and him. We caught him as he reached the street and knocked him off my bike to the street. My bike only suffered minor scratches. 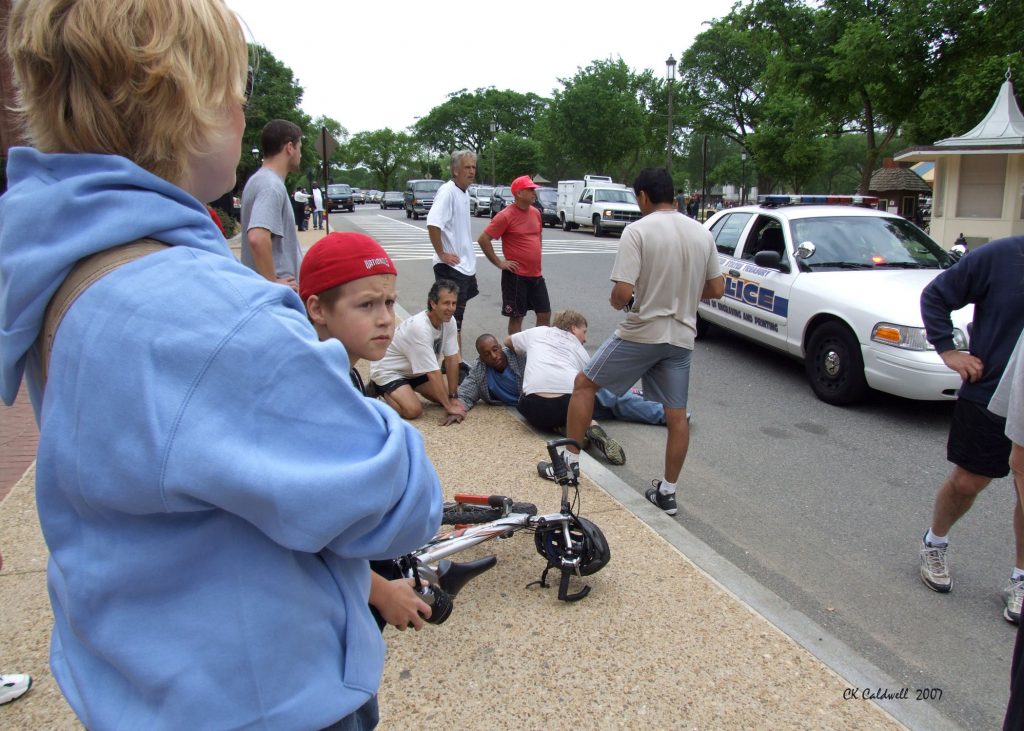 My friends restrained him as I waited for the police to apprehend him and complete 90 minutes of paperwork. When they searched him they found that he had a crack pipe on him. And a knife. Only later was I reminded that you never chase a criminal as they are usually armed and willing to kill you.

_____
Pictured above are my friends Mark Gaffigan  (who did most of the wrestling although I was initially on the ground too), Ernie Rodriguez (in red) and Dave Frenkel (holding his arm down). Ernie had him in a choke hold moments before we stood up to talk to the police. We restrained him but no one hurt him once he was on the ground (that is, no more hurt than getting knocked off my bike to the street will do) 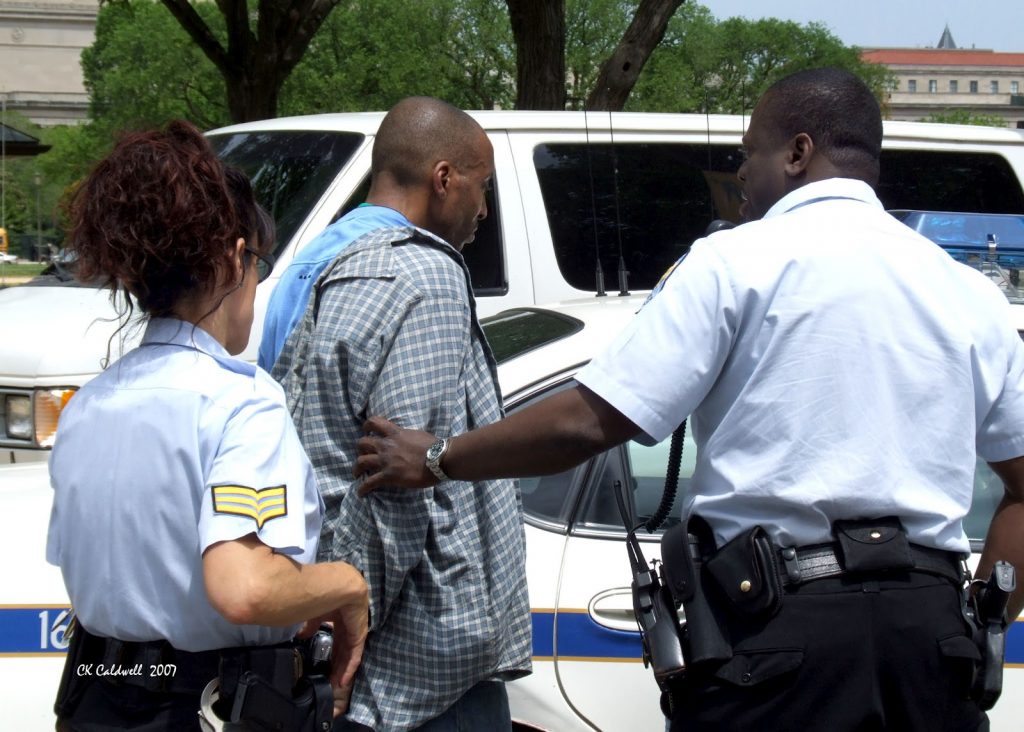 He was arrested, then released, where he would be caught stealing at least three more times before being locked up in July. On July 25, he pleaded guilty to being a bad bike thief and was sentenced to 90 days in jail. I don’t know his criminal background enough to opine whether that was a fair sentence or not but I think an appropriate one would have been 10 days in jail while wearing a sign saying “I was caught by a bunch of old white guys.” 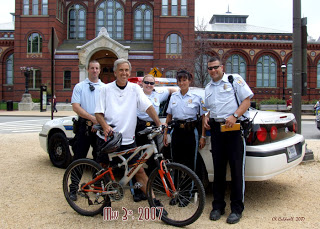 Here I am with my bike and the police who get all of the credit and did none of the work.

Photo credits: CZ Caldwell, who happened to be shooting photos on the Mall and was more than willing to be a witness in this case. Her artwork can be found at: http://www.zazzle.com/starlily