I saw a sign for Adopt a Highway and saw it was sponsored by Blair Co. Bicycle Club for the next four miles. I figured I had four miles. Cool.

After about three more miles I was getting tired. I was in my granny gear and was standing and sweating. But I kept moving without “paperboying” back and forth across the road to make the grade a little easier. Finally it became easier.

I read later that this section is 10-12% but then one hits the wall at a 19% grade for a half mile before settling back to 12% for the last mile. That was it. And I made it. I love riding in these mountains.

On the descent I wanted to let it out. But this road had many curves and it was raining. The rain was following me. The last speed I saw was 43 mph in a curve. Then my computer went out. On the transmitter a support broke off so it wasn’t in the right position to read the magnet on the spoke. I was doing 0 then 10 then 6 then 4 then 38.

It was a great day and weekend of Pennsylvania riding. I would love to do more. Too bad I didn’t take more advantage of it, especially in the Ligonier Valley, when I was a teenager.

____________
*Knowing how steep Darlington Road is was important to me. So I wrote to a local bike shop, Speedgoat Bicycles in Laughlintown, Pa. I never shopped there and they certainly didn’t owe me a response but I got one — a great one. I will definitely stop there the next time I’m back in Ligonier Valley.

While we certainly have much steeper climbs in the neighborhood (I tend to rate them according to how close my tongue is to the road immediately in front of my face), Darlington up to 711 is only considered “steep.” This is worse than “not steep” but not nearly as bad as “pretty steep,” “real steep,” “damn steep,” and our peculiar regional Hors Category col nomenclature, “sucks.”

I’ve also towed my twins up that road with standard road gearing, and I can quickly think of five climbs also within ten miles of the shop that I’d definitely not try that on. So it’s probably not too bad, though I don’t have hard numeric data for you. We have good customers who’ve done the Mt. Washington race/ride multiple times, and it appears that the length is also a major factor. The very, very bottom section of Darlington road probably does spike over 15%, and then it wanders back and forth under that initial grade.

Apparently Mt. Washington would be like going up that thing repeatedly for seven-and-a-half miles. With oxygen depletion, fog, and freezing temperatures waiting at the top.Depressing, but hopefully helpful, too. That Mt. Washington climb is “brutal.”

Using my Garmin Edge 705 GPS, I later measured Darlington Road at 10-11% grade. However, turn off and head up Country Club Road and that goes at 12%.
From Laughlintown up Rte 30 to Laurel Summit is probably a true 8% grade much of the way. However, I could not measure the west side of the mountain at 15% which is what the Tour of Pa. called it. I will need to bike it again but in the car with my GPS, going down, I measured it at 9%.

BEDFORD, PA — 27 June 2008: This was the first in hopefully the start of an annual event. The Tour of Pennsylvania. It joins the Tours of California, Georgia, and Missouri but was unique in that it was for espoir riders, those elite international professionals ages 19-24. With $150,000 in prize money, it was believed to be the largest purse in the world for young riders. But it was a signature event for Pittsburgh 250, a commission to celebrate Pittsburgh’s 250th anniversary in 2008. Much of the sponsor money came from this budget and it also helped celebrate the 250th anniversaries of Bedford, Latrobe, and Ligonier and thus they all played prominent roles in hosting the tour.

The race started on Tuesday in Philadelphia with a prologue time trial and criterium. On Wednesday it was a road race from Downingtown to Carlisle. On Thursday it was a stage race from Camp Hill to Bedford.

Friday’s race was from Bedford to Latrobe on U.S. Rte 30. This is a road I have traversed many times. While “only” 60 miles, this was predicted to be the stage to break open the race because of its two large mountain climbs. The first was out of Shellsburg up Bald Knob to the top of “Seven Mile Stretch.” As a kid I remembered this route for the “Ship Hotel” which was a hotel built on the side of the mountain. It is only a memory now for after it closed and before it could be preserved, it burned to the ground in 2001. Arsonists.


I had volunteered to be a course marshal in Bedford. I was excited to leave the house at 5:30 a.m. for the three-hour drive to Bedford. Check in time for volunteers was 9:00 a.m.

We had our orientation and I tried to decipher what the tour would really be about. I had followed the results on the Internet but the television coverage on Versus was a day behind and spotty at best. I had only seen the time trials.


Our volunteer coordinator was Dave “Lumpy” Williams. He explained how good the Pennsylvania State Police were at sealing the highway to oncoming traffic. The front part of the caravan was all policemen and they forced any oncoming traffic to pull over and wait until the race passed. Our job was to be at intersections and make sure that vehicles did not enter the race course once underway.


I volunteered to be as far out of town as I could get. Nothing against Bedford but some of the locals wanted to stay in town and I had my bike with me and wanted to ride. I rode out to the intersection of Old U.S. 30 with U.S. 30.


Our job also was part ambassador. This was a role I was well suited for. Rather than tell a local they couldn’t use “their” road until the race passed, we could talk up the race and explain what it was all about. I met two families who had come out to the end of the street and I chatted with them the entire time. 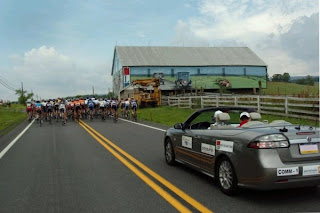 After the race passed I biked back into town then got on the Pennsylvania Turnpike and went to Somerset. I then tried to get to Jennerstown as quickly as possible and almost lost. I was relieved when I got to Jennerstown the caravan wasn’t there yet but make no mistake about it, these boys fly. Even climbing Bald Knob then Laurel Mountain, and some major hills in between, they would average more than 24 mph on this stage.


I had hoped that I would be assigned near the top of a mountain where one can see the cyclists going a bit slower. But the traveling road marshals were to be dropped off at the more remote locations including Laurel Summit, so I thought.


It was bright and sunny in Bedford when I left. Not so at the summit. It was chilly with a light rain but mostly just chilly. The riders probably loved it while climbing, not so descending and I don’t think anyone had newspapers to hand to the riders to stuff in their jerseys for the cold descent to Ligonier.


When I arrived at the summit parking was hard to find. There weren’t a lot of fans on the mountain, maybe 50-75, but enough had come out to cheer on the riders. Unfortunately, some showed why spandex (or is it Lycra?) should only be worn by 19-24 year old riders. A couple of “Clydesdales” were wearing bike gear. Yikes.


I found a couple officials manning the KOM (King of the Mountains) point. I introduced myself as a volunteer. I was wearing my official American Outfitters Tour of Pa. staff shirt. The official told me I wasn’t needed so I could go ahead and spectate.

And I did. The first riders, a group of 13 came over the summit to the delight of the crowd. But then three cars slipped into the race. The State Police quickly moved to remove them from the course and I quickly moved to seal off Laurel Summit Road. I think it was supposed to be manned by a traveling marshal who just didn’t make it up the mountain in time. No other cars got on to the course. The trail group was about 18 minutes down. That was a sizable gap. Once they cleared the crowd dispersed. And I followed. I had hoped they would have two-laned the eastbound lanes of Rte 30 between Ligonier and Latrobe and I would have a chance to pass the peloton before they reached the finish. No chance. As it was, I drove down the mountain but still didn’t catch the rear group until Kingston Dam at Latrobe. In fact, I never saw the convoy, just lots of cars traveling 25 mph. Done for the day, I went back to Ligonier to go riding.

LIGONIER, PA — 28 June 2008 — I rode early in the morning then went to the Diamond at 10:00 a.m. “Lumpy” thanked the volunteers and “without insulting the volunteers who came from other towns” opined that Ligonier was the prettiest town on the tour. I would agree.

Whereas in Bedford the volunteers were assigned to location in town, this race was to start by the Fort just below the Diamond then out of town on Rte 711. All our assignments were out 711 all the way to Donegal. I knew the location I wanted was the intersection with Darlington Road but when it was offered as the “unmarked four way intersection” everyone just looked at each other and one person said he would find it. Only later did I realize which intersection it was.

Still, it all worked out. I got to bike out past Stahlstown to Fort Hill Road. As I rode some locals thought I was leading the race and were cheering for me. But when asked I always stopped and told them what real racers looked like. Young.

I reached Fort Hill Road and rested my bike against a sign. There was a young mother, no older than 30, on an ATV with two small kids in a field across the road. I went to talk with them and told them how exciting it was to watch a race, especially with all the police cars and motorcycles. Since we were at the bottom of a hill, the racers flew by in a matter of 3-4 seconds. And that was it.

Back on the descent the road was blocked and an ambulance was tending to someone in the ditch. The “broom wagon” which had gone by with the caravan doubled back so we know some rider was done for the tour.

I said goodbye, the family thanked me for explaining to them what the bike race was, and I headed back to Ligonier but got in some more riding along the way rather than just go straight back.

It was fun being a volunteer. I hope I get a chance to do it again next year. Hopefully, there is a Second Annual Tour of Pennsylvania.

The winning time from Bedford to Latrobe was by David Veilleux at 2:27. In a sprint.

JULY 17, 2008 — It just dawned on me that Tour never followed up with a simple word of thanks to its volunteers. I find that a bit strange. Email is free and takes about 10 seconds to compose. Not a very nice way to end the experience.

FEBRUARY 28, 2011 — Sadly, this was a one-and-done tour, mostly funded by the Celebrate 250 money. Pennsylvania offers great cycling and is good for tourism, but this event never came back for a second year.