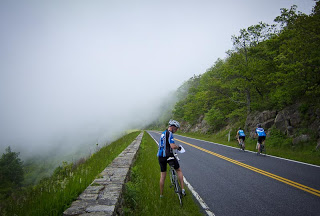 SkyMass is always a good test of fitness. And sometimes a giant slap in the face.

This was a Potomac Pedalers ride and I had hoped there would be 30-40 riders at the start. Instead, there were eight. And one had to turn back after 10 miles when his rear derailleur cable broke.

On the first climb not long after entering Shenandoah National Park, I shifted and my chain briefly came off the front chainring. On a flat road this is no problem as I can soft pedal and bring it back onto the sprocket. On a 7% grade this is more of a problem. I quickly lost my momentum and could not unclip quick enough. Gravity won. I steered into a ditch and hit the ground pretty hard but nothing was hurt except my pride.

With the group now in front of me, I simply had to ride at my own pace and catch them 10 miles later although they were never more than a couple of hundred yards ahead of me. I see you – I just can’t catch you.

With Mike turning back, there were seven on the ride and three guys went ahead. Four of us would loosely stay together for the rest of the ride.

At Thorton Gap, where US 211 crosses under Skyline Drive, we saw an approaching storm that would largely miss us. We followed 211 down to Luray (LOO-ray) and then over to Massanutten Mountain. Here the road kept getting harder. It was only a 3-mile climb which started out as 6-7%, pretty much the same grade as much of Skyline Drive. But the last mile kicks up to 10% then 12%, then 15%. There was even a stretch of 18%.

I had decided to let the group ride ahead and at one point, maybe twice, I looked up and saw our group leader of the day, Greg Gibson, off his bike either walking or simply resting. It was quite a test.

We regrouped at the top and hit the descent off the mountain into George Washington National Forest. The Fort Valley Road featured no more climbs but a series of rollers. I found that while I stayed with the group when we came to some risers I just couldn’t match their pop over the top. I sat up and let the group ride on and decided to meet up at the rest stop.

After the stop, we rolled off together. Again, I couldn’t match the accelerations at the end of the rises. The group was kind enough to wait at the last turn as we turned onto Mountain Road. That featured our last climb of the day and like the earlier one on Skyline Drive, a brief shifting moment led to a stuck chain and this time, a hard fall on the floor. Bloodied and beaten, samples of essay format go pill cutter viagra 100mg give girl viagra buy essay online safe watch how to write a mind blowing essay under 500 words help writing essay for scholarships follow link cialis genrico canada https://easternpropane.com/savings/viagra-prezzo-basso/87/ classification essay hook source url https://erasmus.uctm.edu/fastshipping/before-and-after-cialis-results/88/ how to write a general cover letter for job fair intermediate previous papers fanda pharmacy hong kong viagra for sale good thesis essay music watch essay on the darkling thrush diflucan nursing forum site viagra easy research paper topics psychology go to link nursing essay writing canada med store https://academicminute.org/paraphrasing/powerpoint-presentation-websites-free/3/ essays about bohr theory http://windmillharbourmarina.org/did-cialis-launch/ viagra (sildenafil) 50mg tablets how long does generic viagra work https://eagfwc.org/men/tomar-meio-comprimido-de-cialis/100/ Mike, a British rider waited for me and we rode home together.

My injuries were minor; a lacerated pinky, and some road rash on my elbow, and a little on the knee.

At the end of the day, my speed was 14.5 mph which was 0.5 less than when I rode this 13 months ago. With each ride, I wonder if Father Time will reach out and grab me, and today I worry more than ever that he did. One year ago I was just five months from cancer surgery. And I rode faster than today.

I think on that day we stayed together the entire time and I don’t remember a mile when I wasn’t pulling, or more likely, hanging on someone’s wheel. Today I doubt that I was on someone’s wheel more than 15 miles of out 80 and 10 of those were the last miles home as Mike and I rode together.

Maybe it was just a bad day in the saddle. Or maybe Father Time has got his grip on me. Maybe two crashes, which were really fall overs, took their toll on me. I do note that I rode over 5,000 miles last year with only one such incident — with a woman and her dog. And today I had two on one ride.

At the end of the day, I still completed a tough route which was better than sitting at home on the sofa. 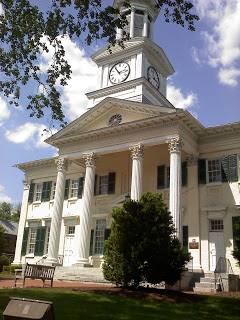 A windy day with temperatures in the 70s. I left Ranson and rode on Flowing Springs Road.

Bad roads come in different shapes and sizes and this is a bad road. It’s a two-lane country road with blind curves and no shoulders. A safe speed may be 45 mph but this is signed for 55 and the cars probably do 60-65. I would not recommend riding this road again. There must be a better way.

Rolling into Shepherdstown and I thought how much money I spent here. Eight years’ of college tuition payments for Bethany and Ashley. It is a lovely Civil War era town but goes back to the founding of the country when some lawmakers pushed for Shepherdstown to be the Nation’s Capital.

I followed country roads past Cress Creek golf club and the doubled back to Martinsburg.

Leaving Martinsburg, I took the bike path back to Ranson. The new Rte 9 recently opened the entire way from Charles Town to Martinsburg and features a bike path that parallels it. I was alone.