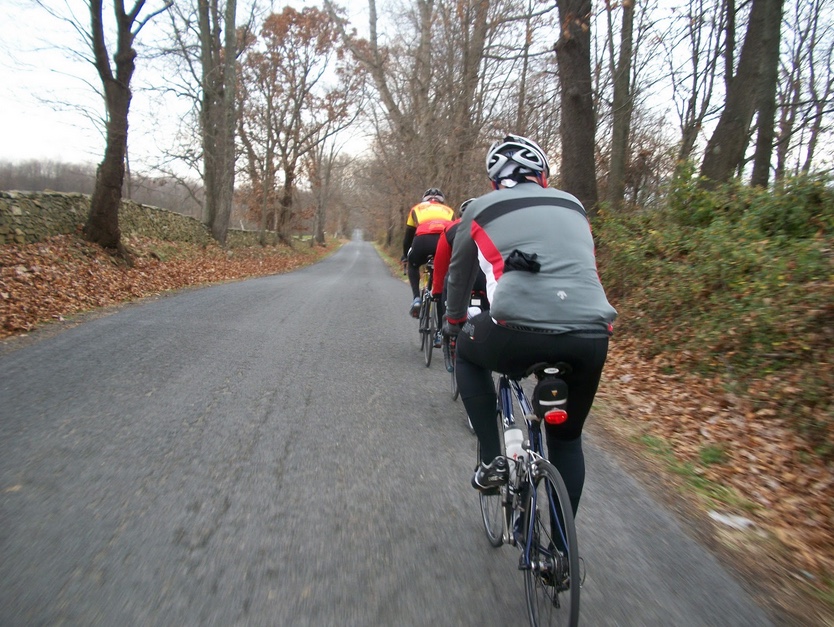 With a forecast of 68° (it didn’t materialize but it did get to 62°) it was a perfect day to ignore the leaves piling up in the lawn and go for a ride.

I found a “CC” ride and decided I would jump in. But I arrived at 9:58 a.m. and decided not to rush but just leave on my schedule although the group was rolling out at 10:00 a.m.

There is something about pulling up with license plate marked UPDHEZ and wearing a jersey from Alpe d’Huez. It’s like a target on my back — I am expected to be better than anyone else.

As the group rolled out there was one other person who was getting ready. He looked at me and said “You don’t look like you’ll have any problem catching the group. Yea, a big ego stroke. So I waited for him to get ready.

We were “wheels down” at 10:10 a.m. We rode at a sensible pace — never hammering it to catch the group because we knew with our pace we would catch them. And we did just 7.5 miles into the ride. But the group was already strung out so we rode through the group, overtaking 10-12 more riders, one each at a time.

Like many group rides, we’re not much on formality. I never did catch the name of the guy I rode with. You never know if you’re going to ride with someone for 10 minutes or 10 miles.
At times as we rode I thought he might drop me then other times I was stronger, but as we approached Aldie I did pull away. For good.

At the Aldie rest stop, I was anxious to keep moving. I’m not a fan of rest stops unless it’s 100° and the lower level the ride the longer the rest stops are and just drag on. As soon as the first three guys left I jumped in and joined them. Greg, Adam, and John. The guy I first rode with was still resting. (I only know these guys names because they asked me mine with about five miles to go after we had ridden together for 30 miles.)

They had been riding together for the first 15 miles and I jumped in without a word. I sort of had to prove that I belonged. I stayed with them until the next hill and then took off. First up the hill. Then I soft-pedaled. I belonged.

After the rest stop at Atoka, and I tried to convince them not to stop, I set the pace for the next two miles. Then I quietly pulled off and moved to the back. Without a word, they were all experienced enough to recognize that we should ride in a paceline with each rider taking turns at the front.

And we did. My last two pulls ended up with me pulling away so I simply backed off the pace. I never thought of hammering home solo today although I knew I could pull away by myself.

This is horse country, lots of money here, and I saw deer running through the woods and jumping over the fences. So graceful. So beautiful. And I thought how differently I see them from some of my Facebook friends who see them only as a target.

Near the end, we were adjacent to Great Meadows at The Plains, Va., home of the Gold Cup races. It was a beautiful four miles back to start. We passed a farm stand with fresh produce and apple cider. It is definitely Fall in Virginia.

As we pulled back into town I went to the front, but not attacking and being a jerk, just enough so I could say “last to start, first to finish.” I had no problem with the pace today — we rode at a BB clip and may have been one of the last good days of the year for a long ride.

I left the parking lot, then stopped by the farm stand and bought their two remaining jugs of cider. I love riding. I love Fall. I love cider.