I arrived at the start location 30 minutes prior and went to registration. There I paid cash and received – nothing. No wrist band. No packet. No bumper sticker or key chain. No swag. Nothing at all.

Most organized events identify the riders with a wrist band (America’s Most Beautiful Ride) or helmet sticker (Livestrong) which shows who paid and who hasn’t. My thought was some riders may come and just ride. And who would know the difference?

In fact, at America’s Most Beautiful Bike Ride one section of the course is closed to only riders who go through a checkpoint. So no interlopers could jump on that course. But here, anyone could just show up and ride.

Benefiting the Law Enforcement United fund, the sheriff’s car had blocked Courthouse Road so that all riders (I’m guessing 200-300 but I have no idea) could roll out together. The first 3-4 miles is a typical roll-out as friends ride with friends and people like me, just find someone their own speed to ride with. I was at the front.

I wasn’t at the front for long. Some people passed me either to share the workload or to tell me I wasn’t fast enough. But I was in the front group. And we were rolling.

The organization did not have a downloadable map so I went to their website, found their cue sheet and mapped out the ride at RideWith GPS. com then downloaded that to my Garmin. And hoped it was right. As we were flying my Garmin beeped – a sign of a turn. I glanced down and it showed a left turn. I looked up and saw a sign that had an arrow – left turn. My group when flying by – straight.

Safely, and quickly, I turned left and yelled ahead “TURN!!!”

It was a reaction. I then soft pedaled to see if anyone would join me as I headed down the road alone. Two guys quickly did although I’m not sure if they were in the front group and had been trailing me. We rode together for a couple of miles and were joined by some others. I don’t know if that front group ever turned around although I assume this was them.

Without a word, we had a nice pace line going. All of us took our turn moving one by one to the front and keeping the pace high. Too high. We were averaging 20 mph over the first 20 miles and I feared that I would pop at any moment.

Yesterday was beautiful — too beautiful. I couldn’t resist the temptation to bike home from work. I took it slow but still had ridden 41 miles the day before this ride. And not that I didn’t think I could do 100 after 40 — it’s just that I can’t ride 100 at 20 mph after riding 40 the day before.

We were flying and I spotted a small sign for a rest stop. I called out and a few of us stopped. We were the first group to go by. The think the rest of our group doubled back and joined us. There were no porta-johns. Just a couple of nice ladies with some water and chocolate chip cliff bars. A church and lots of trees.

After a short break to refill the bottles we reconstituted and took off flying again. It became apparent at some point I would need to find my exit strategy. I couldn’t hang with this group for 100 miles and the question was when and how I would drop off.

After mile 28 we hit an incline, only half a mile, but one where I would typically be shed by such a group. The steep climbs slow everyone but these half-mile 3-4% grades are enough where the young guys just keep the pace high and I can’t match them. But I was although I was struggling.

I just didn’t have the juice in my legs today to power up the climb. So I spun. My cadence was pushing 130 and one rider remarked “your cadence is killing me.” I told him it was killing me too. Remarkably I stayed with them and recovered and we rolled together to the rest stop at mile 40. There they had water, fruit, and cliff bars. And suntan lotion, which would be useful on this sunny day where the temperature climbed to 80 degrees.

Although other riders came in 3-5 minutes after us, when five of our guys took off, I foolishly joined them. I noticed another rider trying to cross New Bridge Road so I asked the group to slow it down for him to join us. They did. To 23 mph. Then I knew.

I knew if this was all they would slow to let a rider catch up that I couldn’t hang much longer. I dropped then paced the rider back up to our group. We rode for a couple more miles and the rider behind me dropped his chain. The group kept going. We hit another rise and here I decided I just couldn’t match every acceleration for 100 miles. At mile 48 I was done.

Then I discovered that until then I hadn’t enjoyed one bit of the ride. If I wasn’t setting the pace I was watching the wheel in front of me. And I was tired. Tired from 40 yesterday and tired from hanging on today, I resigned myself to ride solo over more than half the route and enjoy the ride.

I was in “no man’s land” for more than 15 miles. I knew my group was up ahead and there were plenty of riders behind me but I was in between. And I was OK with that.

At Mile 58 I saw a sign for a rest stop at Shiloh Methodist Church. I pulled in and there was nothing there other than a port-john. A couple of riders also pulled in. Although we rolled out together I was in no mood to try to keep up with anyone. I let them go.

At Beaverdam, mile 74, I came to a pretty beat up country store. It was just what I needed. I was out of water and I was able to buy some plus a Snickers bar. Only when I left did I see a sign advertising this as a rest stop.

I left trailing some riders and in front of another and that is where I would stay. Never catching anyone and staying ahead of the guys behind me. Not the smartest way to ride but I didn’t have to worry about staying with a group when the legs weren’t up to it.

My Garmin showed 94.5 miles when I arrived back to the start so I kept going. I know Garmin had shut down at mile 5 and it took another 0.5 to get it back but I still wanted to ride to read 100. So I went out another three miles then turned around. Even if they call it a “century,” in my book it’s not a true century unless one rides 100 miles.

On the day I averaged 18 mph for 100 miles.* Probably 19+ with the group and 17- without. But still OK being the first century of the season, the day after riding 40 miles home from work, and one month after knee surgery. And it was windy too.

We crossed Lake Anna eight times, all between mile 30 and 50. Many of the roads were back country roads in the woods although the last few miles were on the busy shoulderless Courthouse Road.

As far as support the ride gets a “D.” Definitely below the average organized event with a very small variety of food at only two locations and nothing after mile 40 when we needed the most. No water unless you had money to stop at a store. But it’s about the ride and most of my rides I don’t look for support, but nor do I pay $45 for that privilege. 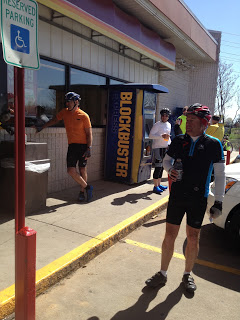 I was pleased to see “Knock, Knock, Knocking on President’s Door” posted as a Potomac Pedalers ride for today. I last did this ride almost three years ago and suffered. I rode with a broken wrist and a yet-to-be-diagnosed e.Coli infection.

It wasn’t until two years later that I uploaded my data to RidewithGPS.com that I realized how sick I was. I knew I had to come back and ride it “healthy” albeit three years older.

I counted 30 people for this A/BB/B ride. Wheels down at 9:00 a.m.  It was 39 degrees. And windy. We split into two groups – the As (and BBs) and the Bs. I looked at the Bs and  (foolishly) decided I would try to ride with the As. That is always a bad idea. I should have stuck with the Bs.

In those first five miles we shed a number of riders, all of whom dropped back to the following B group. But I was struggling to keep up with the As.

As we hit a rise I started trailing off as did another rider. He told me that he knew he didn’t belong with them and would be dropped. But then he picked it up, integrated with them and I had to watch from 200 meters back for the next seven miles.

As we hit the serious climb in Cunningham Falls State Park I caught him, rode with him, then dropped him on the climb up Park Central. As we climbed I kept wondering how I did this with a broken wrist three years ago. I couldn’t stand out of the saddle and put weight on my wrist so I had to sit in all ride. I realized that even with a healthy wrist this was a tough climb.

From Mile 5 until the Sheetz break in Thurmont (Mile 31), I was a lone rider. I caught the previously mentioned rider and was passed by a real strong rider, “probably 35” (years old) said another about him. But that was it. I could have been on a solo ride.

At Sheetz the A group was getting ready to ride and foolishly (again) I decided I would ride with them. The rider who had passed me, wearing a green fleece looking jersey, went to the front and set the pace. And pace. And pace.

It was windy and perhaps 11 of us were struggling to keep the pace. I was working hard, (struggling) and moved to the back in case I wanted to drop off the pace. That would not be necessary.

At mile 43 we hit a rise and two of us dropped off the pace until the top of the hill. I thought the group would soft pedal for 10-15 seconds and let us integrate. Nope.

There had been two women riding and one of them, Stephanie Becker, dropped back when I did. After a few minutes of watching the group 200 meters in front and coming to a stop sign where they had not waited for us I said “I’m Barry.” She may as well should get to know me because we weren’t going to bridge the gap and it was apparent they weren’t interested in playing nice and waiting.

We rode at our own pace, both taking turns in the wind, and riding sensibly until the end. We discovered the group split up not long after we were shed. Just another Potomac Pedalers Ride. Sigh.

Comparing metrics to three years ago, today wasn’t a whole lot better. I want to think the wind made it harder and I would have done better.

I rode 0.5 mph faster today and I want to believe I would have been at least 1.0 mph faster if not for the wind. My heart rate was only six bpm lower today. But I am three years older. And I’m happy.