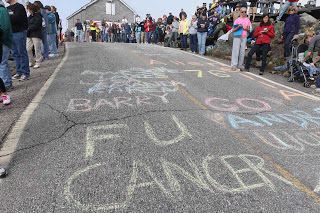 This does and does not lend itself to a Top Ten list. I like to do a Top “Ten” because 10 is such a nice number. But for a year that began hoping I’d go to Italy or Ride the Rockies, I had to settle for something less. At least that’s what I thought. A year in which I rode more than any year before (6,500 miles) there are too many memories to narrow them to just 10.

It was a year in which I did not have a week without a ride. As for what defines a “ride,” I do not count the miles running “errands” including 0.5 mile to the Mall in D.C. at lunchtime to play Ultimate Frisbee. I define a “ride” as just that — it has to be a minimum of 10 miles to make my count. But I did count one ride of less than 10 miles – the 7.6 miles up Mount Washington. Was that wrong?

1. Mt. Washington Auto Road Bicycle Hillclimb – When I first started dreaming about climbing the big mountains in Europe, I discovered Mount Washington. I wanted to do it once and now have ridden it five straight years. This year was crazy because I had all but decided not to go then changed my mind, drove up Friday morning, arrived late Friday, did the race on Saturday, then drove home Saturday night, arriving just after midnight. I remember this one most for the uber nice Gabinksi family who gave me a ride down the mountain: Vic, Alison, Alexa, and Lucas.

2. Bike Virginia – I looked forward to Bike Virginia for a chance to ride with my cousin, Kay Walborn. We didn’t ride much, mainly because she was on course each day before I could ride to the course since I elected to stay at Bethany’s and Ashley’s places. But we rode some. I also rode with a former work colleague, John Dockins. But mostly I remember being struck by a car. That hurt. But I survived.

3. Pedal Pal – Let me be clear – I wish I didn’t know what it was to have cancer. But I am a survivor and that has opened some new opportunities for me including being a Pedal Pal for Patrick Sheridan. I rode out on Day 1 with Team San Francisco from Baltimore to Alexandria and rode in with them on Day 70 from Mill Valley, Ca. to San Francisco. But it was mostly about Team Portland and Chey Hillsgrove supporting Jake the Hero Grecco.

4. Mt. Tam – My friend, Eric Scharf, always said “you have to ride Mt. Tam.” And so I finally did. I was on a rental bike and missed my Trek Pilot. I really missed my bike. This bike didn’t have the climbing gears my bike did and I was suffering. But the best “compliment” may have been made by Kevin Barnett, when he asked what we did with Peter (Bai) who rode with Rodrigo Garcia Brito and me that day. Kevin said Peter came in immediately after the ride and crashed.

6. 24 Hours of Booty – My first Booty and it won’t be my last one. While I joined Team BootyStrong, in Columbia, Md., I rode in memory of Jake and established a team for 2013 – Jake’s Snazzy Pistols. 7. RAGBRAI – Every cyclist must ride across Iowa once and this was the year it worked out for me. I can’t say it is my kind of event because it is much too crowded but I enjoyed the point to point riding each day. And I killed the mileage knocking out 700 miles in a week of riding from South Dakota to Illinois. 8. Jeremiah Bishop’s Alpine Loop Gran Fondo – This is a fund raiser for some local charities including the Prostate Cancer Awareness Project. I invited Chey Hillsgrove to join me and we had a great ride until he crashed out.

9. Riding with Dad – I never went for a ride with my dad until he turned 82. Memorial Day weekend we rode on the Great Allegheny Passage between Frostburg, Md. and Meyersdale, Pa.

10. Civil War Century – One of my favorite rides but wasn’t a century. Cut dangerously short at Mile 75 by severe weather I took a shortcut back to the start. I returned five weeks later and rode to Gettysburg by myself to finish the ride.

11. Livestrong Gala and Challenge — Given the 1,000 page report by the USADA outlining systematic doping at U.S. Postal and Lance Armstrong, I am still sorting out my thoughts. But thousands of cancer fighters not named Lance support and are served by Livestrong. It was fun being among them, and Lance, for a weekend in Austin. With 6,500 miles on my butt for 2012, I now have surpassed 10,000 miles for two years and 15,000 for three years. Cancer-free. I can’t predict where 2013 will take me although I would like to do Bike Across Kansas if the route is right and Ride the Rockies. A trip to Europe would be nice. And maybe a repeat of Bike Virginia. As for the Mt. Washington Hillclimb, I just received my private registration code since I have ridden it five consecutive years but don’t know if I will do that one again (I said I wouldn’t and I mean maybe).

The best rides are just following the road ahead and I’ll go where the road leads as long as my health permits.