This was the 9th Annual Governor’s Ride. I had signed up for it when it was scheduled for the day after the Sea Gull Century last month but both were canceled due to flooding from Hurricane Joaquin.

I left the house at 5:15 a.m. for the two and a quarter hour drive to Smyrna. The sun was rising as I crossed the Chesapeake Bay Bridge in Annapolis. I pulled into the parking lot at 7:30 a.m., relieved that I had 30 minutes before wheels down.

I found Branon Cooper, who drove in from Pennsylvania. I know him from Spokes of Hope – we last rode together in August at Trexlertown. He then introduced me to Cory Marshall-Steele, who organized the ride and someone I have corresponded with on Find a Grave over the years.

We rolled out of the Municipal Park with a full police escort. We had four or five SUVs and that many motorcycles leading the way for us. Initially, the governor, Jack Markell (Delaware) set the pace. There was an immediate gap and I stayed up front – there were eight of us from the 75-member group.

But the pace slowed down a little to allow everyone to organize. Branon was going to introduce me to Jack but I found myself riding side by side with the governor. We talked a little – not about politics. I imagine the ride is nice for him that he doesn’t talk politics. He told me he has ridden the W&OD “out to Purcellville.” Nice guy.

Branon and I moved to the front and tried to set a reasonable pace that wouldn’t blow the group apart. We pulled most of the way to the first rest stop at Woodland Beach – which was right on the Delaware bay. We could see across the bay to New Jersey.

We rolled out of the first stop, again, Branon and I at the front quite a bit. One guy came past us and kept going, maybe in an attempt to pick up the pace, but we were in danger of dropping everyone. We let him go. After a quick in and out at Bombay Hook National Wildlife Refuge I was on the front when we hit Parson Point Road – a chip and tar road that was more chip than tar. I set a pace I was comfortable with – I prefer faster to slower for safety in the loose gravel. 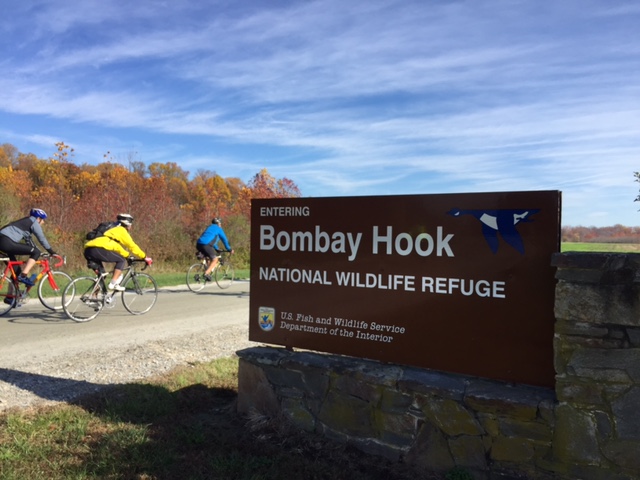 After we got through the chipped road, we sort of regrouped. We were on a country road when we passed a house with two dogs running loose. The owner was furiously trying to corral the younger one, a pit bull chasing bikes. There were motorcycle cops at the front and rear of the group and a governor somewhere in the mix. I could picture the dog attacking the governor and a cop, well, intervening. But the dog was all bark – no bite. 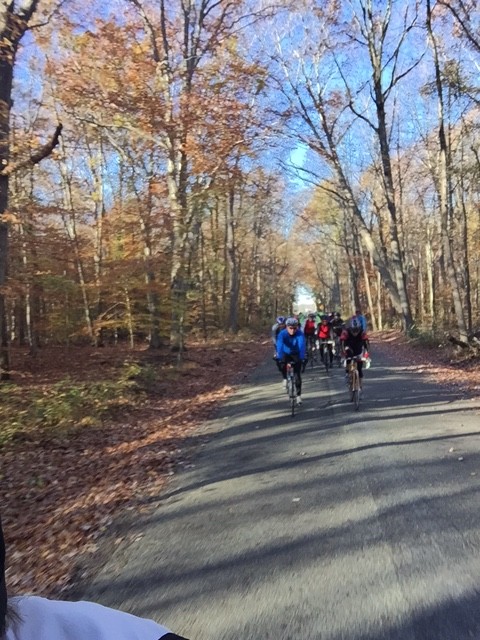 After the second rest stop I decided to roll out last and sit in with the last group. Except I couldn’t. I was behind them for a while but they were too slow. When it was safe to pass, I went through and had to bridge up to the next group which was 1/4 mile away. And after a few minutes I worked my way through that group and bridged up to the next one. That was sort of fun. In a day of casual riding I could still hammer by bridging to new groups.

We all pulled over for someone with a flat and once we rolled out I did the same thing: started last then bridged up to the front groups. At the end there was lunch but I didn’t have time to stick around. I thanked Corey and the state troopers then headed home.

It was a beautiful day although a bit windy and cold at start (45 degrees). But it was otherwise perfect. I didn’t mind a slower than normal pace* (maybe a B or CC) but I’m not a fan of 30 minute rest stops. In all I had 1:10 of down time – way too much for these legs. But I am really looking forward to doing this ride again next year. 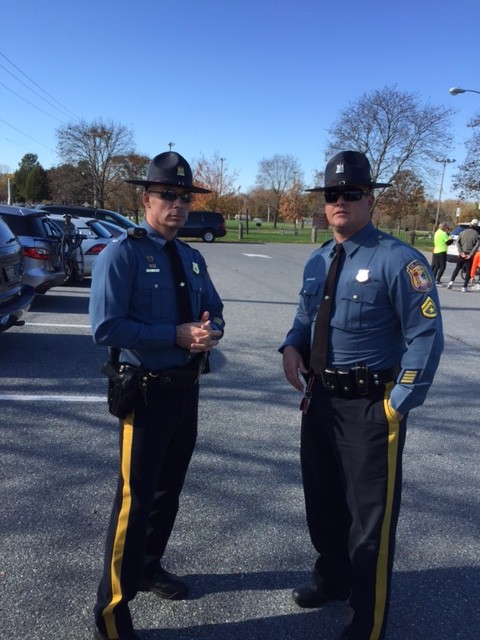 ___
*Actually my moving pace was 15.8 mph which was much faster than I thought. The lengthy time spent at the two stops made me think the pace was slower than it was.