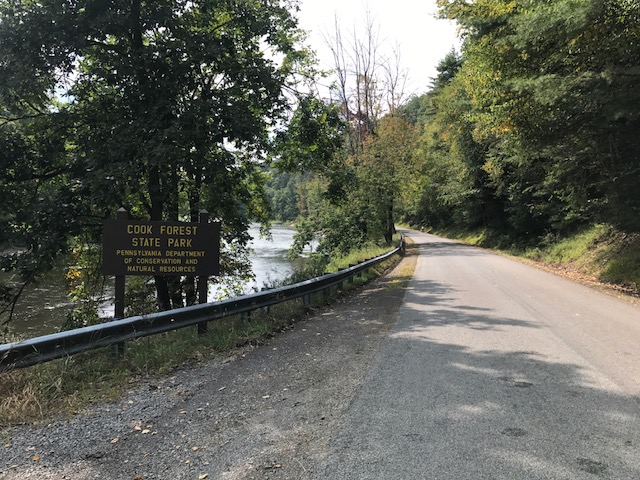 My fundraising for the Keystone Country MS-150 in July bagged me an unexpected bonus: Entry in the Cook Forest River Ride. 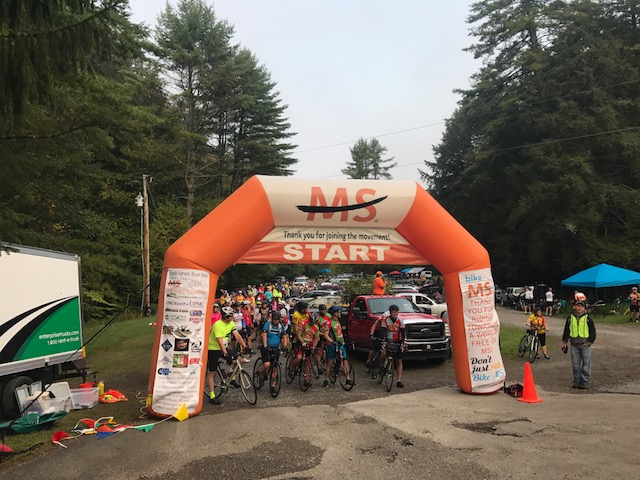 Disaster struck as I went to get dressed. I grabbed the only clean bib shorts I had and discovered they were the ones with knee covers. It was chilly but not enough for those.I thought about wearing a dirty pair but that would be gross. Better to be too warm. I had gone out to the car to check to make sure those were the only clean ones remaining on this trip. They were. My fashion choice also slowed me down on leaving the hotel.

Last night I checked the time and distance to the start and determined it was a 30 minute ride from the hotel. This morning it was a 42 minute ride. Not sure what happened but I came into Cook Forest running a little late. 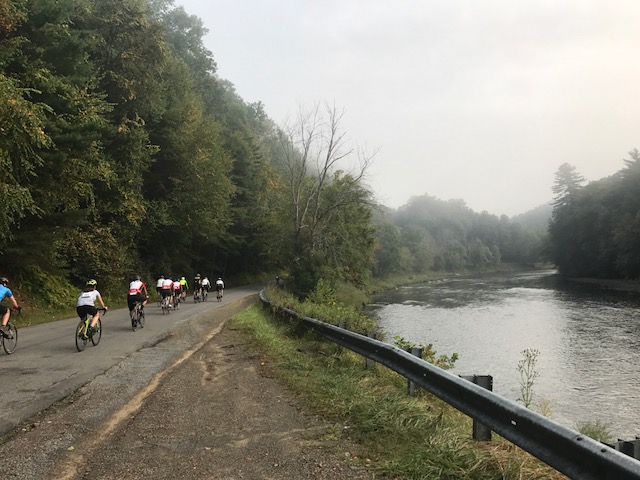 I went to registration, passing my cousin, Kay Walborn, briefly saying hello. Got my swag (t-shirt) and took it back to the car. Riders were queued up. I went to the back of the group but lost Kay. I just couldn’t find her. 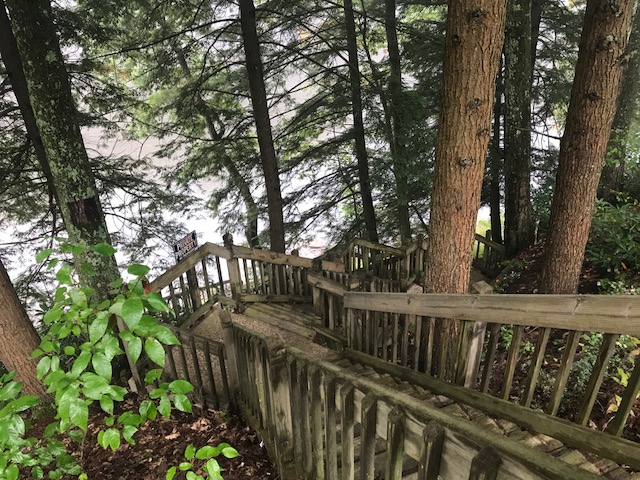 I started dead last then started making my way through a couple hundred riders trying to catch Kay. I stopped for a couple photo ops but generally kept going. 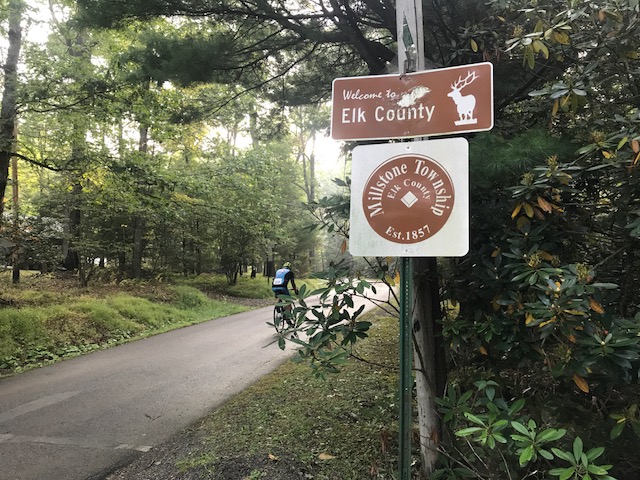 The course follows the Clarions River for 17 miles and some riders would do a 35 mile out-and-back. We turned across the river then started climbing. I saw a rider up the road and didn’t think I was gaining on him but eventually passed him. On the top I was by myself. 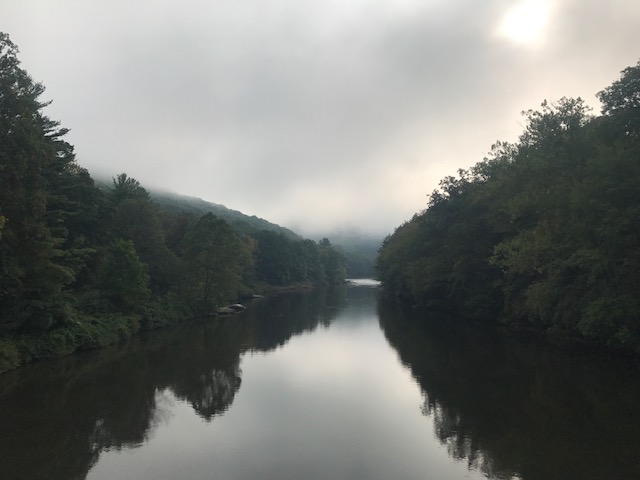 At Mile 30 I pulled into a rest station. And Kay was getting ready to roll out. She waited for me to grab some water and 1/2 banana. She was shocked I was behind her. She thought the entire time I had taken off ahead of her and she was trying to catch me. 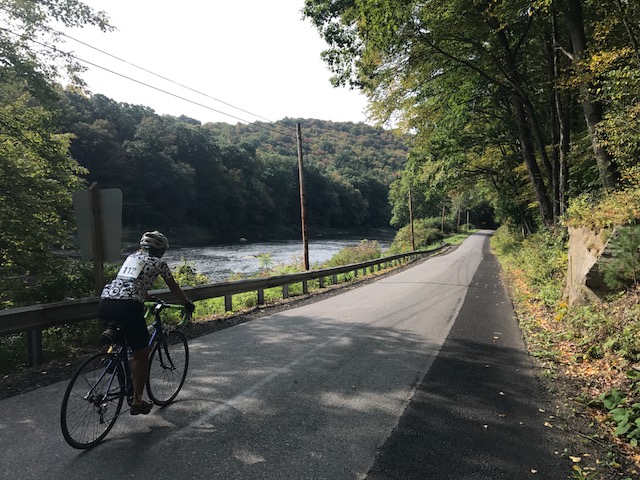 We had been hammering the route trying to catch the other. We were probably never more than 3-4 minutes apart on the road at any time. We rode well together. I had a big advantage in going down hills (weight) while Kay had an advantage going up the steepest hills. One topped out at 22% according to my Garmin. I could not hold her wheel on that climb. 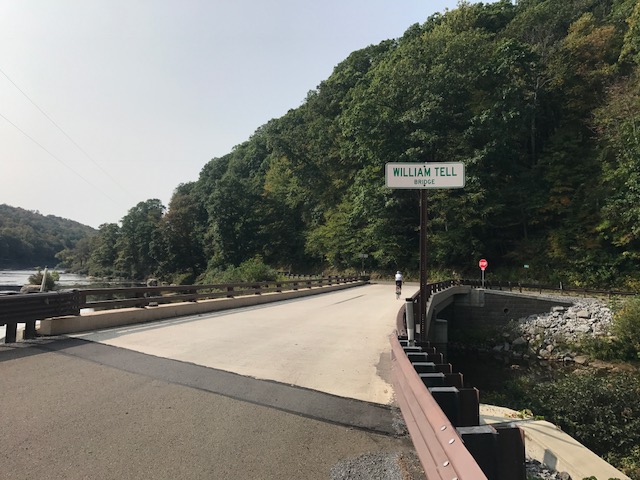 We passed a rider struggling and I told him he had just been passed by a 69 year old woman. She was kicking his butt. Mine too. 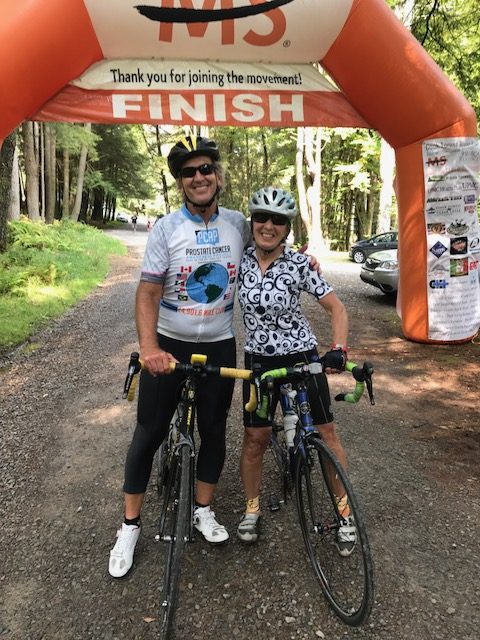 Back at Cook Forest they has served up a nice luncheon for us. We ate and then headed back home.  Not sure I would do this ride again but it was quite nice. And great weather today. Kay said that was a first.

This wasn’t the trip I planned but this was the trip I got. I drove to Dayton with the intent of doing a 30-35 mile loop around Mahoning Dam up to North Freedom. 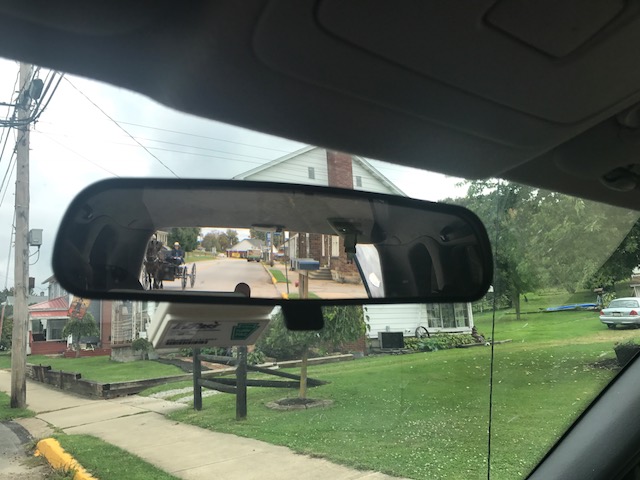 I arrived in Dayton to begin my trip. I had preloaded a course on my Garmin and was determined to follow it. I went about 500 yards and turned onto a dirt road. Oh crap. Not sure how long I could do this. Thankfully it was less than a mile. 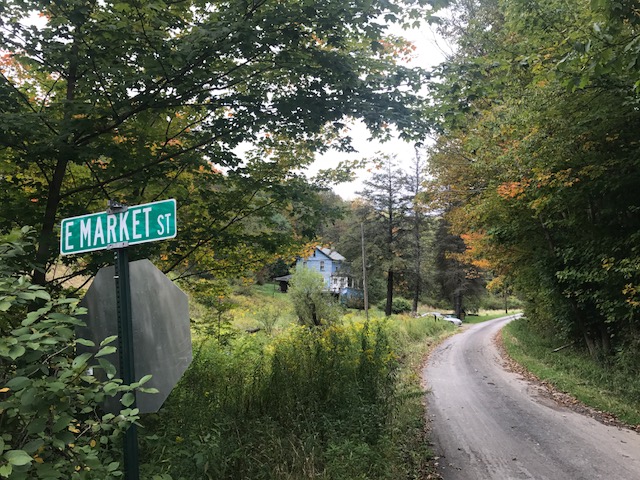 I followed my course for about four miles when Garmin told me to turn. It was a dirt road. I decided to forgo my plan and ride the “main” road. The main road was a chip and seal road. There were no flats. It was up and up again. Perhaps an occasional down hill. But not many. 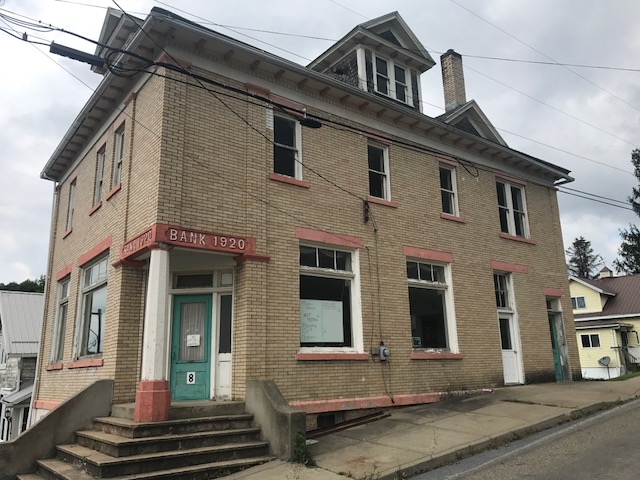 I turned to go to Timblin, passing the farm of Scrap and Dot Snyder. Scrap is deceased but he was a classmate of my dad’s, and as I would discover later, 4th cousins.

Hard to imagine that 100 years ago this railroad town was a center of commerce. I stopped at the post office and talked to the postmaster, Stacey Taylor. She helped me with some of my roads. I had wanted to go up Brocious Road. I found the road, despite missing a sign, but found it was uphill, turned to gravel, and protected by angry dogs. I turned around. 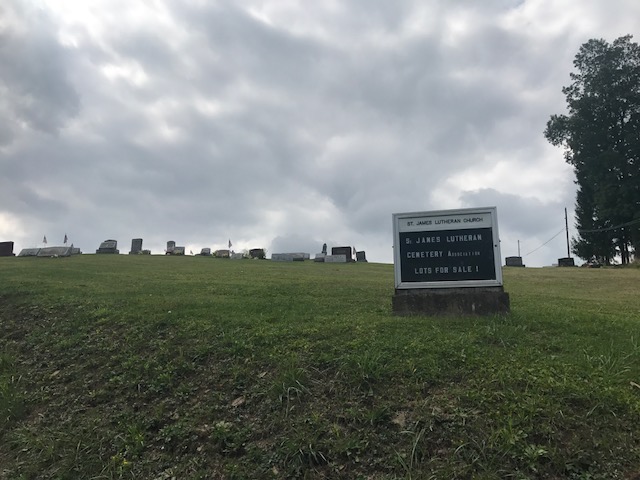 I found my way to St. James Lutheran Church, founded by my great-great-great-grandfather in 1831. In 1989 I visited the church and was not greeted warmly as the locals were afraid my Uncle Tom Sherry and I were there to steal their pastor. We weren’t. 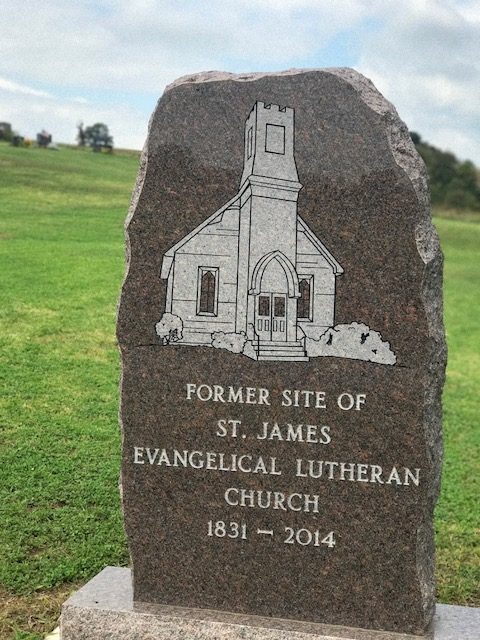 The church closed three years ago and Stacey told me the Lutherans tear down their closed churches rather than let them fall into disrepair. I didn’t have time to walk the entire cemetery but found some of my Sherry relatives. I actually meant relatives named Sherry because the cemetery is full of my relatives. 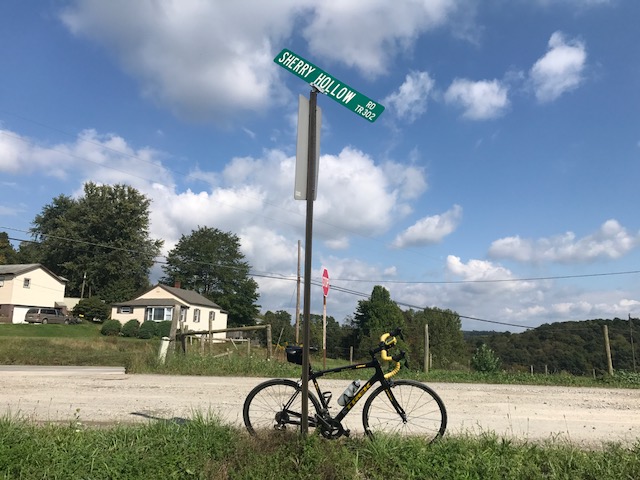 I left on my planned route and one mile later the road turned to gravel. Although I followed it for a bit, I turned back. I came to Shreckengost Road where I saw a teenage Amish girl. We talked for about 10 minutes. She helped me avoid gravel (go back the way you came). 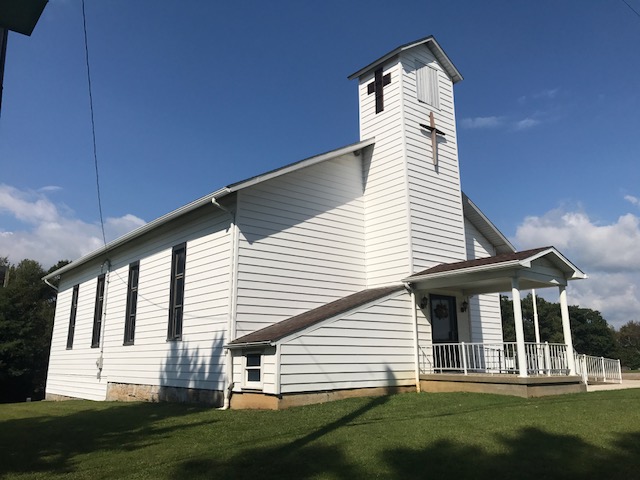 I went to Ringgold then headed over to North Freedom. I passed Sherry Hollow Road. I understand my great-great-grandfather, Daniel Sherry’s brother, John Sherry, had his farm here. 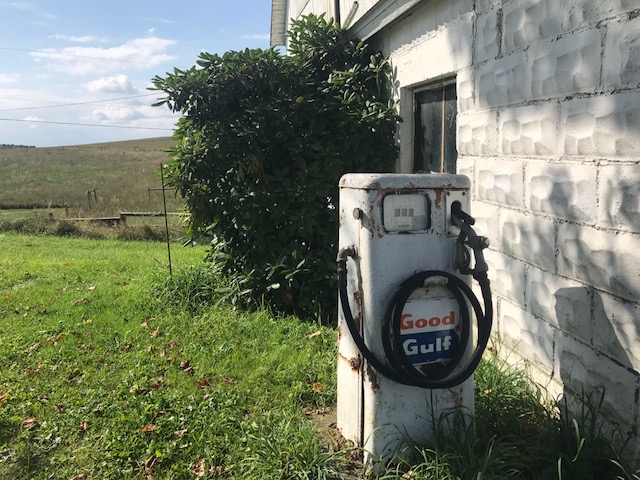 We lived in the area from 1961-1964. My dad served four churches and I passed the North Freedom Church. I made my way to Salem, or New Salem, and saw the second church. In New Salem I attended a two-room schoolhouse for first and second grades (1-2 were in one room; 3-4 were in another). My teacher for first and second grade was Mrs. Shreckengost. 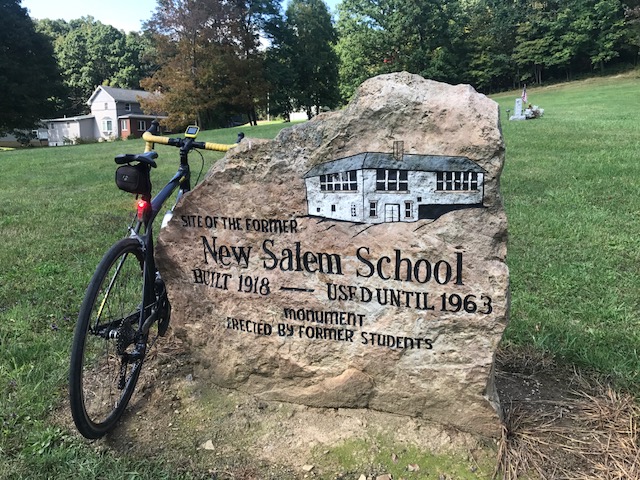 I left Salem and rode down to McWilliams. Then it was back towards Dayton. My legs were hurting. 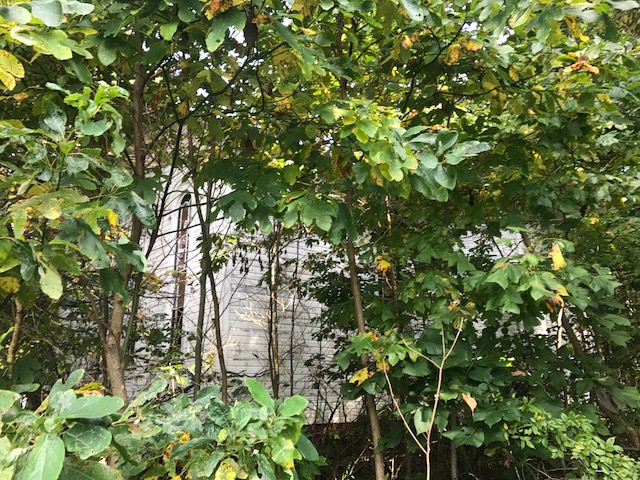 I came to the crossroads. Here was Mt. Carmel E.U.B. church which may have close by 1968. It was the third of the four churches my dad served. A forest surrounded it and I thought about the Lutherans. How much better it might have been to simply tear it down. 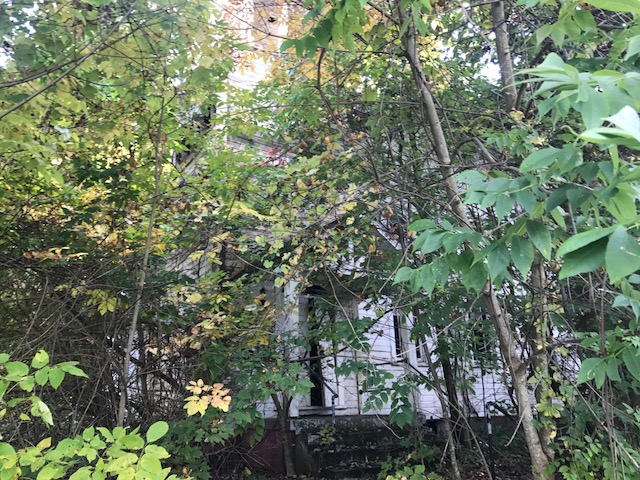 The sign said Dayton – 8 miles. I knew my planned route was around the face of the Mahoning Dam. And I knew it would be 12 miles. I was very tired and was planning to ride the MS Ride tomorrow. I decided to go the short way. 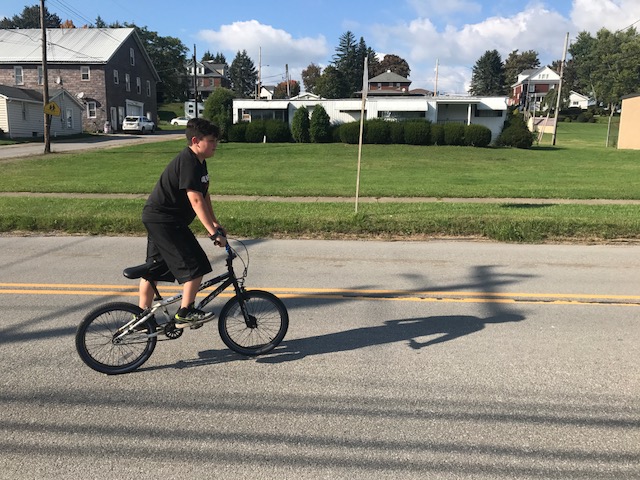 I got back to Dayton and met a kindergarten teacher at Dayton Elementary School. The school opened in 1963 and we were bused from Salem to Dayton to attend this new school. It has been 54 years since I had been there. She was not impressed.

Back in Dayton, I met a kid on a bike. He wanted to race. He wasn’t wearing a helmet and I told him that I wouldn’t race unless he wore one. Deal breaker.

In a little over 30 miles I had climbed about 4500′. That was extremely mountainous. It was hot. I was toast.

That evening I met my 4th cousin, Jody Sherry Scott, in Clarion.  She told me her dad was born in McWilliams. We met at her frozen yogurt place in Clarion, Yo-Licious. I highly recommend it.