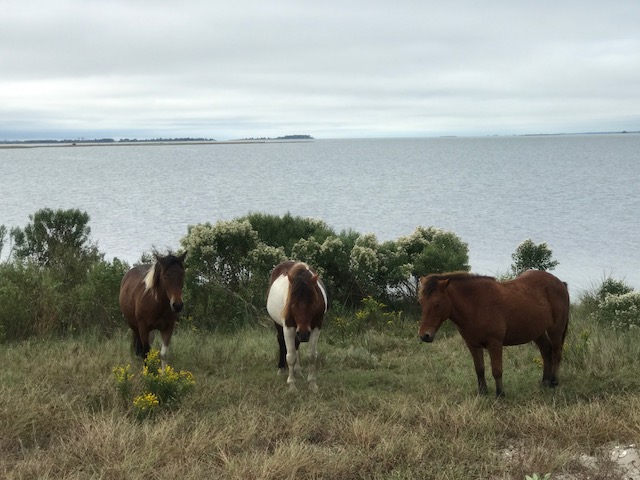 Even taking 15-20 minutes to get ready at the car I was still wheels down two minutes before sunrise. It was a day to wear my rain jacket. Call it what you want, either a light rain or mist, but it was enough to make me wet and keep the roads wet. I didn’t know anyone and was determined to ride alone. Although I hoped I would run into the contingent from the Blair Bicycle Club. I would follow the Assateague route, fully aware they had another one called Snow Hill. (I think.) It rained (mist) for the first 90 minutes. Even if I wanted to jump in a pace line, wet roads and road spray convinced me not to. I had a helmet sticker that wasn’t too sticky. In fact, I felt it come off just 5.5 miles into the ride. I felt bad about not stopping to pick it up (and I saw others) but I wasn’t in a position to do it safely. But then I came upon the “Beware of Walnuts” sign. There were two, actually, and I was prepared, almost, for a photo op. I safely maneuvered to a stop, turned around, and there on the road was a blinking rear light. I picked it up so that was a litter offset. Good find. I came into the town of Snow Hill. It is a lovely town with its own lovely river (Pocomoke). The rivers on the eastern shore always fascinate me. The town was decorated for Halloween with a “scarecrow” on every block. As much as I liked Snow Hill, I cursed myself for making a wrong turn. I was sure I was on the Snow Hill Century route. Any chance of running into friends was eliminated. Eventually I came to accept it and make the best of it. My two goals for the day were (1) don’t crash and (2) see some wild horses. Now I concentrated on not crashing. Just four miles outside of Newark I came upon a sign which said Assateague – 22 Miles. I was on the right route after all. I perked up. I continued to ride solo until Assateague with one exception. A huge group flew passed me. I bet there were 50-75 riders. I jumped in at the end. We were going 27-29 mph. Into the wind. I briefly thought about riding on their wheels but the roads were still wet although drying out. But I didn’t know about their bike handling skills. And honestly, this was not a free ride. My highest heart rate and highest speeds were recorded while I was riding with them. I came to Assateague and found my horses. I was happy. I ate a banana and grabbed some Fig Newtons. I don’t get my money’s worth for these rides. I went past the first two without stopping and only ate a piece of fruit here. I saw the group that I think I rode with. It looked like it swelled to 100 or more riders. Not for me. I had five guys pass me then I jumped in with them and rode to the next stop. (Potato chips). I briefly let them go when we came upon to riders who crashed by overlapping wheels in a group. At the rest stop I didn’t wait but continued on. I never saw those guys again. I’m not a fan of long rests at the rest stop. Again, I was solo but eventually was caught but then joined a small group. We rode a comfortable pace to the finish. Well, almost comfortable. At the overpass over US 13 (Mile 100) I followed them right up to the top then a couple of them had a sprint to the end of the bridge. They gapped me at first and then I cramped. But I worked through it and stayed with them to the finish. The arrival features an underpass and about 200 yards of sidewalk. A slow ride to the finish. It may have knocked down my average speed. Last year I averaged almost 17 mph. Even with the slow finish, I averaged 18 mph today. It was my fastest, and longest, ride of the year. And wettest too (I’ve been lucky.)