A new ride to me. A cancer ride sponsored by Amy’s Army of Cancer Warriors benefitting the VCU- Massey Cancer Center.

Logistically, I decided I would park at Stone Brewery, a huge lot about a mile from Libby Hill Park. There were only a handful of cars there and the parking space I was looking at (near a tree) had lots of broken auto glass – the sign of a break-in earlier. Ugh.

I had to check-in and pick up my timing chip before the ride. I rode up Williamsburg Avenue and turned on Libby Hill. Our route would take us up this climb twice on our ride. I decided to make it three. There was as much grass as there were cobbles. It was actually an easy climb. Not steep. Not long. And the stones weren’t that annoying.

Throwing some numbers at it – the best I can tell the climb is about 220 meters with an average or steep grade of 9%. While we did two climbs, the pro men in 2015 for the UCI World Championships did 16 climbs up the hill.

I positioned myself at the back of the group for rollout. When we were ready to go they announced that I was at the front. Oh well. I turned my bike around and rolled up behind the police cruiser who would escort us for a four-mile urban loop before bringing us back to Libby Hill where we would climb the hill, for the “first’ time. This one was timed.

We skipped Rest 2 and rode 30 miles to Rest 3. We averaged 18.2 mph with most, but not all, taking pulls. I did. Some of the non-Sweet Spot riders never came to the front. The last 10 miles we averaged another 18 mph. I backed off before the climb just so it wasn’t so crowded. Once I hit the climb my legs knew it. The first two times were easy. The last one was not – it’s what having 60 miles in your legs will do. 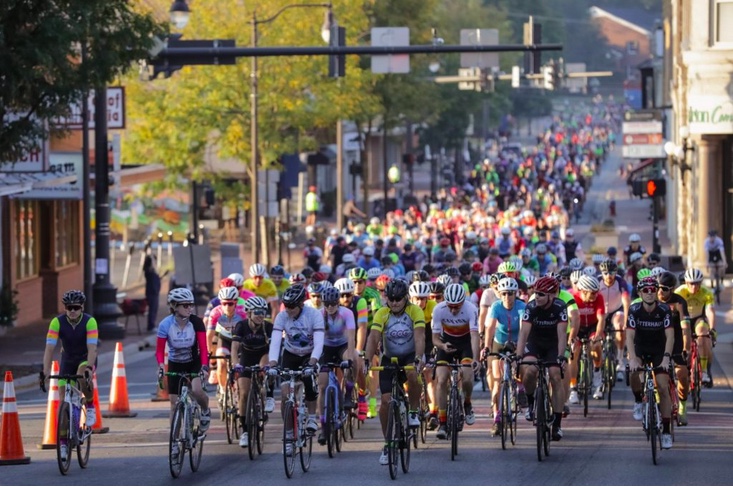 The weekend began yesterday with an invitation-only ride out of Harrisonburg with Jeremiah Bishop and The Vegan Cyclist. Jeremiah took us off-road where he may have been the only one comfortable going down dirt roads. But no one fell and we made it back to registration at Craft Brothers Brewing in one piece.

In summarizing today, one only needs to look at last year’s post. I sucked on the first mountain climb. I sucked more on Reddish Knob. Cramped. I decided it was best not to do the 20-mile loop making a century ride.

Of my eight times doing this event, this started out the most perfect. The temperature was just right (mid 60s). I was at the start line plenty early to say hello to friends.

One thing I did not do was to pick up a timing chip to be timed on the climbs. I finished dead last in the WORLD last year at the World Hillclimbs Championship so who am I fooling thinking I would win anything? Plus, without a chip, I may be free to stop and take pictures.

At the start line, we were called out or recognized. As a prostate cancer survivor, I am always recognized. I’m sort of like a mascot. A big cancer-surviving mascot.

At 8:00 a.m. we rolled out. I was in the front row and stayed there for the first couple of miles. When we turned off the road I dropped back four or five places. But we were often doing 20-25 mph in tight quarters. Except for Jeremiah Bishop, these are not professionals. I am not a professional. I am just uncomfortable riding that close to that many strangers. I pulled off at a Mennonite Church and let 100-150 riders go by before jumping back in.

A century ride should be ridden as easy; medium; hard. That is, ride the first third easy. And I wasn’t. Maybe they were riding easy but it was more effort than I wanted to use at that point. It was foolish for me to ride hard to stay with the group. I backed off.

I was seemingly passed by everyone on the road. Many times I thought I was dead last but often 4-5 minutes later someone else would pass me. Sometimes groups of 3-4 riders went flying by. Where were they hiding?

We got to the first mountain climb, Shenandoah Mountain on U.S. Rte. 33. I was passed by 22 riders and passed no one. I was having a bad day. I briefly talked to 16-year-old Ben, who I helped last year. He had passed me but then I caught him and asked him if he was going for another jersey. He told me he was but didn’t think he had a chance. I hope he made it. We both stopped briefly at the summit but I had a good fast descent and didn’t see him after that.

At Reddish Knob Road I started the climb. It is tough. It begins with a one-mile climb followed by a one-mile descent. Then the fun begins. It’s a five-mile climb with 1,635′ of gain. That averages to 6.2% but that is skewed by the last half mile or so which flattens out. By contrast, the seven-mile climb at Horseshoe Curve (Altoona, Pa.) averages about 4%. That one does have a very tough section of 20% though. But Reddish Knob is harder.

I was passed by five riders going up Reddish. But three of those I eventually passed back as they were pushing their bikes. It is tough. One guy was paperboying all over the road and still passed me. Until he walked.

It took everything I had not to stop. Not to walk. I dug deep then went deeper. My right knee was hurting. I made the decision to do the 80-mile route and forgo the century. I also tried to make plans for dinner with the granddaughters in Martinsburg and I couldn’t do both.

The last 20 miles went fine. The last 40 may not have. Occasionally I was passed by a rider or two. I was always amazed at the pop they still had in their pedals while I struggled.

And like last year, Katie Yates came over from JMU to meet me. Unlike last year, a storm moved in which would have caught me on course had I not ended early.

This ride gets harder every year. I have to either get younger or lose weight. I am carrying too much weight up these mountains (although the downhill portion is fun).