The Horrible Hundred occurs over two days if you include the Saturday orientation rides. Those are delightful and, like group rides, occur under adult supervision. Not so the Sunday ride.

This would also be a test of the Wahoo Elemnt Bolt, a new bike computer I bought in Jacksonville on Friday. I decided to mount both computers as a test.

I downloaded directions to the start on my Garmin and followed those yesterday. I didn’t load the route today thinking I would retrace yesterday’s route by memory. I was wrong. Normally with a keen sense of direction, the fully gray skies gave me no directional bearing. I had gone three miles and was literally, just feet from the hotel where I started and never noticed that until viewing my route hours later.

I wasn’t getting closer to Waterfront Park. A message appeared on the Bolt. “Where are you?” It was from John Dockins. Messages on my bike computer, pretty cool.

I called him and told him I messed up. I was two miles away and would be there in eight minutes but he was raring to go. I realized I was on course and told him I’d ride back to meet him.

There was one problem with my plan. Although I was two miles from the start, the route would circumvent the lake first before climbing up the hill to our meeting location. I rode back. I waited. And waited. And waited some more.

Eventually, I was convinced John had ridden by and we missed one another. John had suggested meeting at Rest Stop One. At this point, I figured I had missed him so I rode ahead to Rest Stop One.

As I approached the rest stop I thought back to the map I had looked at before the ride. Only then was I pretty sure they went around the lake. I had cut off eight miles. But it’s a ride, not a race, and I was adding four to and from the hotel to get the same mileage.

At the rest stop, I called John. He was five miles behind me. I told him I’d ride back for sure this time. And I did.

The first segment to Rest One was not fun. This is a big event and mob mentality takes over. At two red lights, I was the only cyclist to stop. Even with cross-traffic tens of cyclists went by me, sometimes flew by me, through the intersections. I thought I might be hit by someone flying by.

Another time I was on the shoulder – to the right of the lane line and a cyclist flew up the gutter passing me. This was unsafe and not fun. And another group came by so fast and so close I jumped on the parallel bike path to avoid them. I hadn’t remembered such aggression before but will now consider this my last Horrible Hundred.

John and I stopped at Rest One. The stops were well stocked with food and big lines. Not a complaint, just an observation. And great volunteers.

John and I stayed together mostly. I let him go ahead on Sugarloaf Road but caught him on the climb. I set a PR on Sugarloaf on a day I was determined not to try. And sometimes when we try we go into the red and blow up. Slow and steady set my PR. (And now am in 5200th place.) This was ironic because I was thinking this was my last hill climb of 2019 and to enjoy it, not go out to set a PR.

As we came back into town we were on the last hill. It had probably a 12% grade. A few feet in front of me I thought a rider was doing a track stand (balancing the bike while stopped). I wondered, briefly, why he was showing off this skill. Then he stopped and fell over very hard. And yelled. Very loudly.

He had cramped badly and could not pedal nor could he unclip from his pedals. I stopped along with a woman. We tried to get him help and a SAG ride for the final two miles but he said: “I must finish this.” It’s a man thing. I understand. After five minutes I helped him to his feet then rolled on. The Bolt had a message from John: “Are you OK?” If it can respond I don’t know how to do that so I ignored it. (Note: It can’t.)

It was a chilly day. We had some very light rain in the beginning but mostly it was cold (low 50s) and windy. The phone was in a jersey pocket under my vest. Using it meant stopping and unzipping the vest. Maybe removing a glove too. So I didn’t take pictures on the road or try to call or text John (using Siri).

We went to lunch then said goodbye. I had to find my way back to the hotel. I noticed the mileage was different between the two computers: 73.0 and 72.9. I thought they would be perfectly equal. I have more testing to do.

We rolled out at 9:00 a.m. for a 42-mile ride, not including my hotel miles. The organization for the Horrible Hundred offered these “familiarization” rides the day before the event. Our group, about 14 riders, at first looked to be mostly equal in ability. But quickly, one noticeably overweight cyclist dropped back. I love riders riding, of all abilities. So I dropped back to talk with him.

He was from Winchester, Va. which made us practically neighbors. Really, he would have been fine except he kept talking about his domain is the mountains so he can’t go as fast as the flatlanders can on these flats. Saying nothing would have been fine. We’ve all been the slowest or fastest. No excuse is necessary.

The rubber band broke and he lost contact with us although one of the leaders stayed with him. There was a four-mile loop before a turn so we went ahead and when he arrived there he would turn and be in front of us on course.

At Mile 30 we stopped at a gas station. Ever mindful of lactic acid building up while standing around, I announced I would keep going and soft-pedal. The group could catch us. My friend came with me.

I had to soft-pedal and wait a little on some inclines but I was keeping us together. I saw a port-a-john at a boat ramp and pulled over. He did too.

Now with 10 miles to go, we pulled out onto the main road. Except he didn’t come. I pedaled slowly for 1/2 mile and never saw where he went. Then I decided just to ride.

I doubt I was the oldest in the group but was far from being the youngest. I was sure the group would catch me. But then I didn’t want to be caught.

It’s a funny thing, this sport. You tell the group you will ride ahead and they can catch you. And after a while, when they don’t, you become determined not to let them catch you.

I picked up my pace and occasionally looked back the road to see if they were coming. It was almost “time trial” mode for the last 10 miles although I don’t have aero bars on my bike. Some did though.

They never caught me. I was first in this group.

I went to registration and signed in for tomorrow’s ride. I left and backtracked 1/4 mile expecting to see my group. I never did.

I hope they did not suffer any mechanicals or accidents. I was sure the group would catch me but of course they didn’t know they were chasing. And maybe today I rode faster than the group behind.

My ride home took me on St. Rte 50. Six lanes of traffic and a designated “bike lane” on either side.

And there you see it. Cyclists’ deaths are up this year. The NTSB says cyclists should wear helmets. And be more visible. But this is infrastructure. A guardrail protects pedestrians from out of control cyclists but cyclists get to ride side by side with traffic that is signed for 50 mph (actual speeds usually higher) and we are protected by a four-inch strip of paint. Bigger vehicles. Smartphones. Crappy infrastructure. We get a strip of paint. That is why cyclists’ deaths are up. 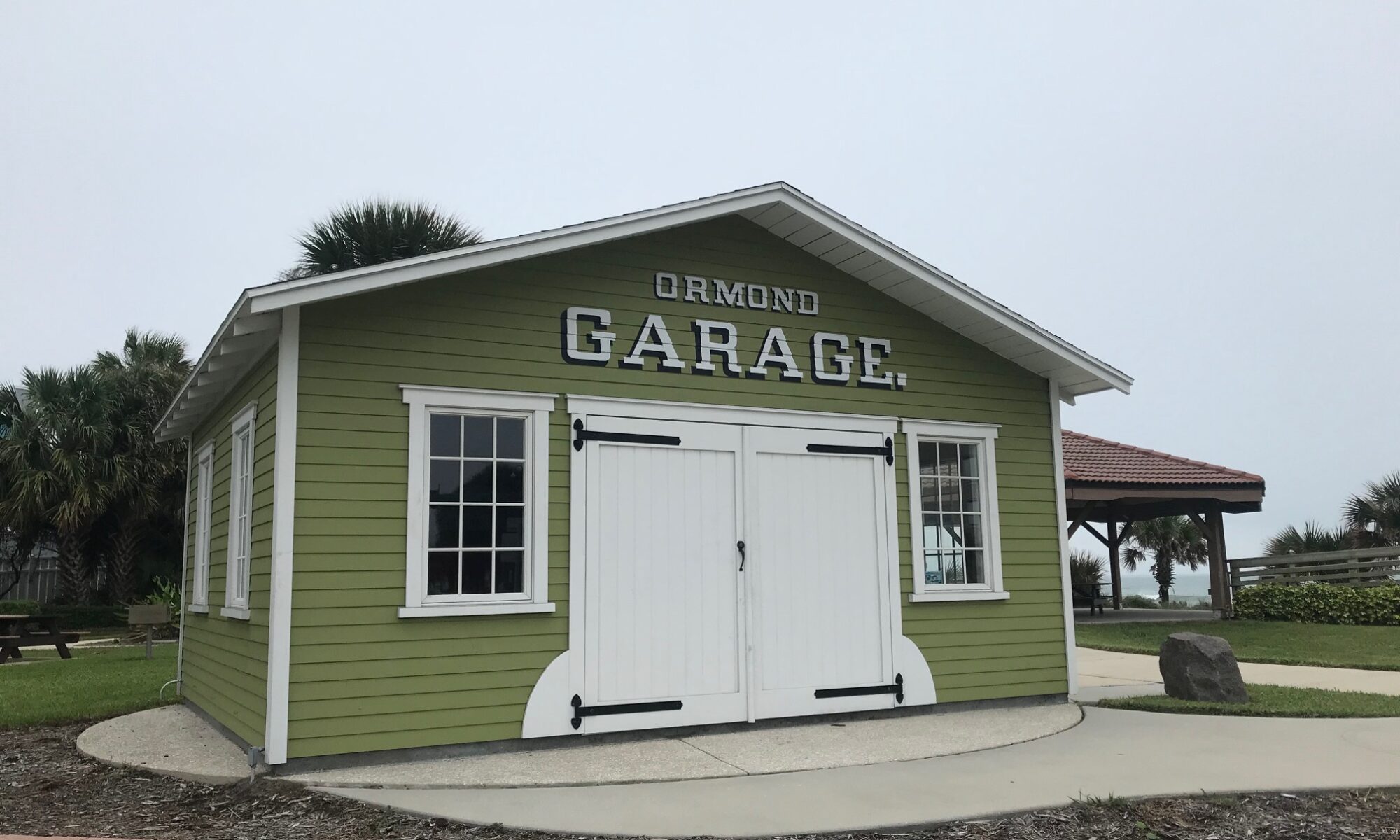 On my way to the Horrible Hundred in Clermont, I swung by Ormond Beach to ride to Daytona Beach. It wasn’t far but was just enough to stretch the legs.

I parked in Ormond Beach and crossed the Intracoastal Waterway over to the thin strip of land next to the beach. Temperatures were in the high 50s and it was a gray day.

But there is always something special about ocean air. It refreshes the lungs.

I checked out the oceanfront then crossed back over the Intracoastal and headed north back to my car.

I wanted a few more miles and crossed the Intracoastal one more time (and back again). Then drove on to Clermont.

I still had one hour to go on I-95. I stopped at the rest area near Ladysmith to change into my riding bib shorts. My ETA moved to 9:42 a.m. I arrived at 9:45 a.m. but there was no close-in parking. A policeman directed my 1/4 mile up the road.

I got the bike down from the roof, changed my shirt to a jersey, grabbed a vest, and hustled to registration. It was 9:55 a.m. I was handed a bib to pin on and the ride took off. It was 9:57 a.m. I’ve never been to a ride that left early. I put the bib in my vest pocket.

There were two routes – a full metric (62 miles) and a shorter 48-mile route. My granddaughters came to visit this weekend so I thought I would take the shorter route. I rolled out at the start, dead last. Kept an easy pace and saw the split up ahead with the cool kids picking up the pace.

At the split of routes I went short. I passed a few people and arrived second at the rest stop. A number of riders I passed all showed up as I made sure to thank each of the volunteers. So about six of us left together, I was on the front. Eventually, a couple passed me but I stayed 50-150 yards behind them for the next 20 miles.

And then I passed them, catching and passing the only two riders ahead of me. I was having a good day.

A car passed me followed by a motorbike who said, “keep right.” I was right and I thought it was a warning not to be all over the road. Instead, he should have said, “stay right, we’re passing.” But he probably didn’t have time. About 10 seconds later a small peloton of about 20 riders, led by Ben and Jeremiah Bishop, came flying by. Ben said, “keep up the good work.” They had caught me. They rode 15 (or more miles) farther and they passed me.

Oh well. I was only 2-3 minutes behind them arriving at the end. I saw Ben and Jeremiah briefly but went inside to pick up my ride swag which I did not have time to take to my car beforehand. When I came out they were gone. Maybe they just put their bikes away.

I had granddaughters at home. I was happy with my ride. I left.

The ride was a fun ride. It especially looked like it had a nice meal plus there were items to be auctioned for charity. I missed the social part as I rushed home. I don’t regret missing out but I hope Ben does this ride next year and I can bring some friends.