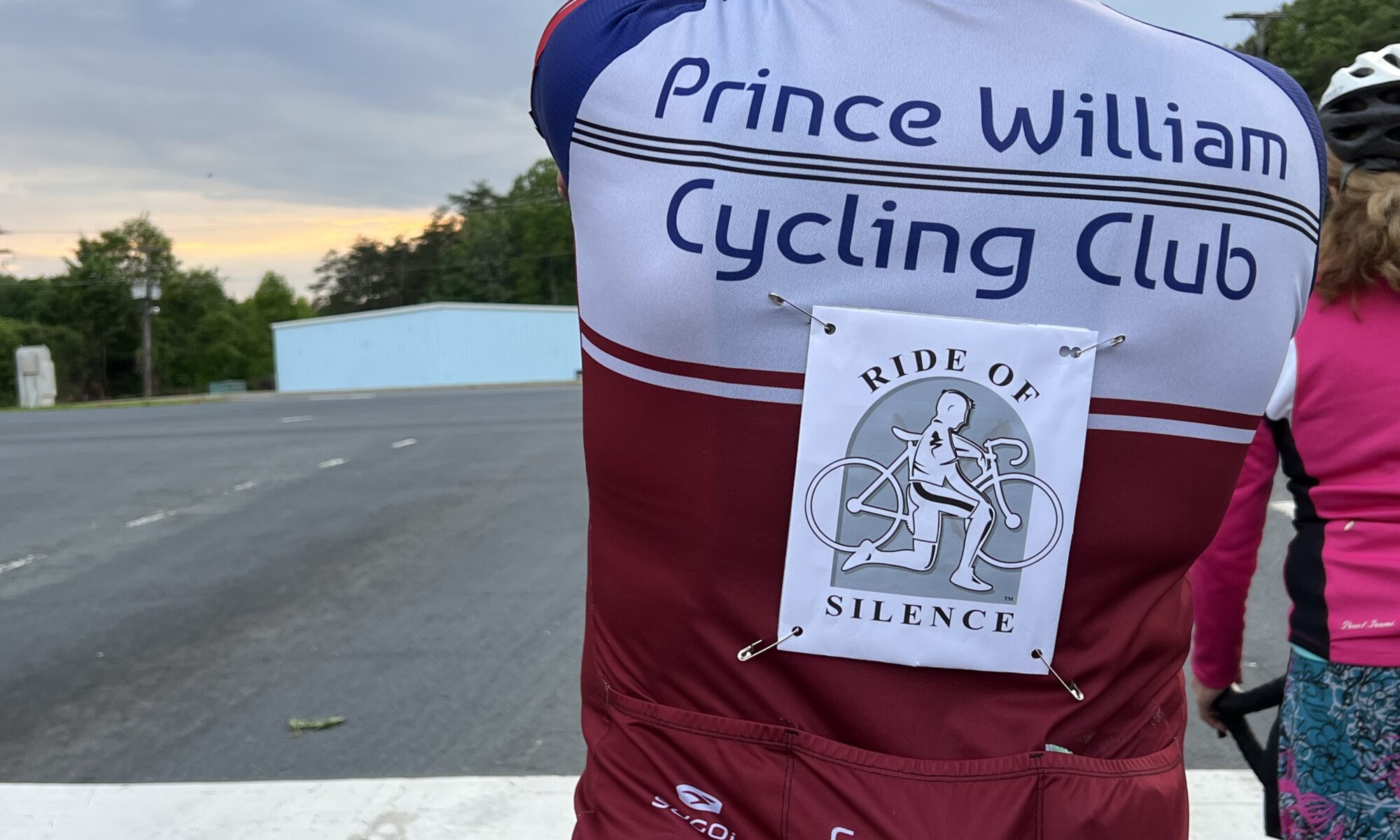 It was one week ago that I thought about the upcoming International Ride of Silence. I have attended a couple in Rockville, Maryland, and was at one in Dayton, Ohio. But I thought we should have something in Virginia.

I checked the website and only saw a ride at Radford. Nothing in northern Va. Nothing in Richmond or Roanoke. Nothing in Virginia Beach. Wow.

I decided to organize one. With little publicity we had six riders come out to our FIRST Ride of Silence. I wasn’t a novice at organizing rides. Nine years ago I had organized a “Tribute Ride.”

We met at C.D. Hylton High School. I chose this location because it is the site where Joseph James Callahan was killed in September 2013. He was riding on the bike trail in front of the school when a 17-year-old girl drove off the road, struck, and killed him. We rode for Joseph Callahan.

I also bought new flags for his makeshift memorial. The school has let it remain on the property for eight years and I’m afraid without maintenance they may remove it.

The program was simple. We wore black armbands in honor and memory of those who have lost their lives to drivers. We wore red if we have been struck by a vehicle. Half our riders wore red. Read that again.

I opened the “program” with remarks about the Ride of Silence. I spoke about Joseph Callahan and then about Jamie Roberts. We opened our circle to recognize anybody. Chelsea Johnson led us in The Ride of Silence poem.

Tonight we number many but ride as one
In honor of those not with us,
friends, mothers, fathers, sisters, sons
With helmets on tight and heads down low,
We ride in silence, cautious and slow
The wheels start spinning in the lead pack
But tonight we ride and no one attacks
The dark sunglasses cover our tears

Chelsea was with Jamie when she was killed in Kentucky in 2014. Chelsea spoke about how Jamie lived!

After the event riders were invited to Armetta’s for a post-ride celebration and reflection. This will be the first and many rides to come. 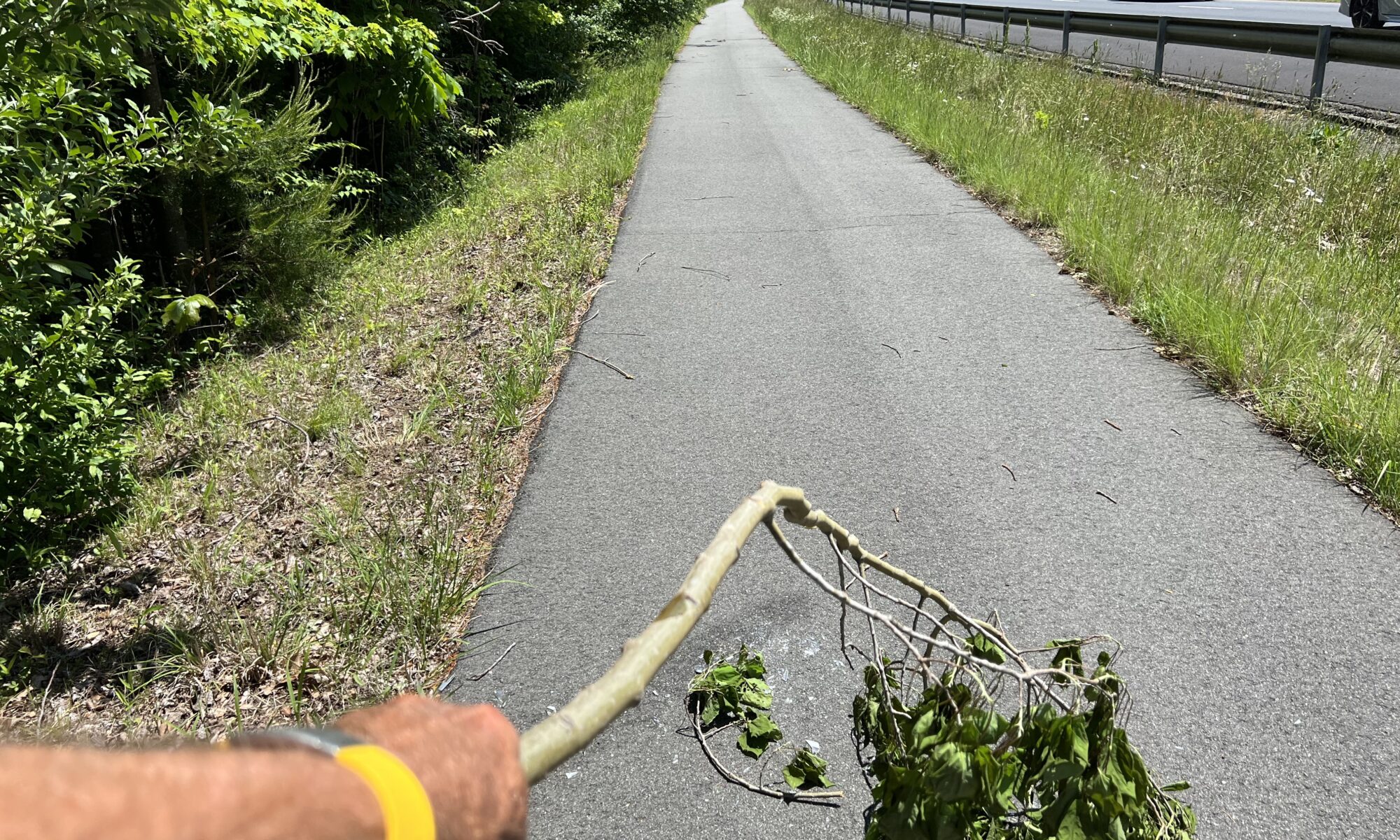 It started on Twitter although it has been asked many times. Why do cyclists ride on the road or in the street when there’s a perfectly fine bike trail available? This time it was posed by Mark Kaboly, Senior Writer for The Athletic covering the Pittsburgh Steelers.

This could be an honest question wondering what decision-making goes into the process for a cyclist to choose the road. More likely it was a passive-aggressive shot at cyclists for daring to use the road. And it got the desired responses.

I know better than to engage in a “discussion” (argument) on Twitter but wanted to use the forum to answer the question myself. I don’t know the stretch of road in question but there are plenty of road/trail choices in Virginia I have to make every day.

I remember in 2012 when I rode more than 5,000 miles without a crash or fall over except for one. It was on the bike path on Rte 234 when a small dog on a leash crossed my path. I swerved right into the ditch to miss the dog and its owner. The overcrowding, slow traffic, and unpredictability of trail users add to the dangers one encounters.

Like today, on the trail on Va. Rte 123, I came to the shopping center. A car was coming out just as his light had turned red and the ped-head (for the trail) and the traffic light were green. I inched out watching him. His head was turned hard left to see if he could beat that traffic while making a right turn on red. I was in the intersection and he almost hit me without looking. These trail crossings are very dangerous.

And that was my response to Mark and just a couple of the responses. To continue reasons why cyclists may not take the trail:

7. Maintenance on the trails is almost non-existent. They build them once and then forget about them Many develop huge cracks, cracks enough to swallow a skinny tire or cause an inexperienced cyclist to crash. In addition, some trails, especially the Mount Vernon Trail south of Alexandria, are so rooted they are almost impossible to ride but that trail sure looks nice when you’re driving by on the George Washington Parkway.

Maybe the most egregious are the sewer pipes that extend above trail level. These can cause a serious accident yet the county merely paints them.

8. Cyclists may want to take the road because it’s faster than a trail. Bikes are transportation and a cyclist may need to get to an appointment on time – just like a driver.

9. A cyclist may be wanting or need the cardio benefits of riding hard and not easy. Worst are the trails on Hilton Head Island which weave around trees and are popular with our little cyclists. But for exercise value, these offer little compared to the street.

10. Strava. Yes, there is worldwide competition to be the fastest in a certain segment between two points. For many segments, the fastest route is on the road.

So there are 10 reasons a cyclist may choose to ride on the trail. Ultimately the decision is up to the cyclist, not a driver.

Near Little Orleans, Maryland on a backcountry road last week there was one car on the road. Behind me. The driver pulled beside me and yelled for me to go ride on the bike trail. What he didn’t know was the Western Maryland Rail Trail ends at the Indigo Tunnel but drivers see an unconnected segment at Little Orleans and assume it is one contiguous trail. It isn’t.

In my mind, I yelled at him to drive on the Interstate. And he told me he has the right to drive where he wants. Exactly. And we have the right to ride where we want (subject to restrictions such as super-highways). But that was in my mind only. We’re just not at the point that drivers understand that cyclists can choose where to ride. Sometimes it is on a trail and sometimes it is on the road even when the trail is available.