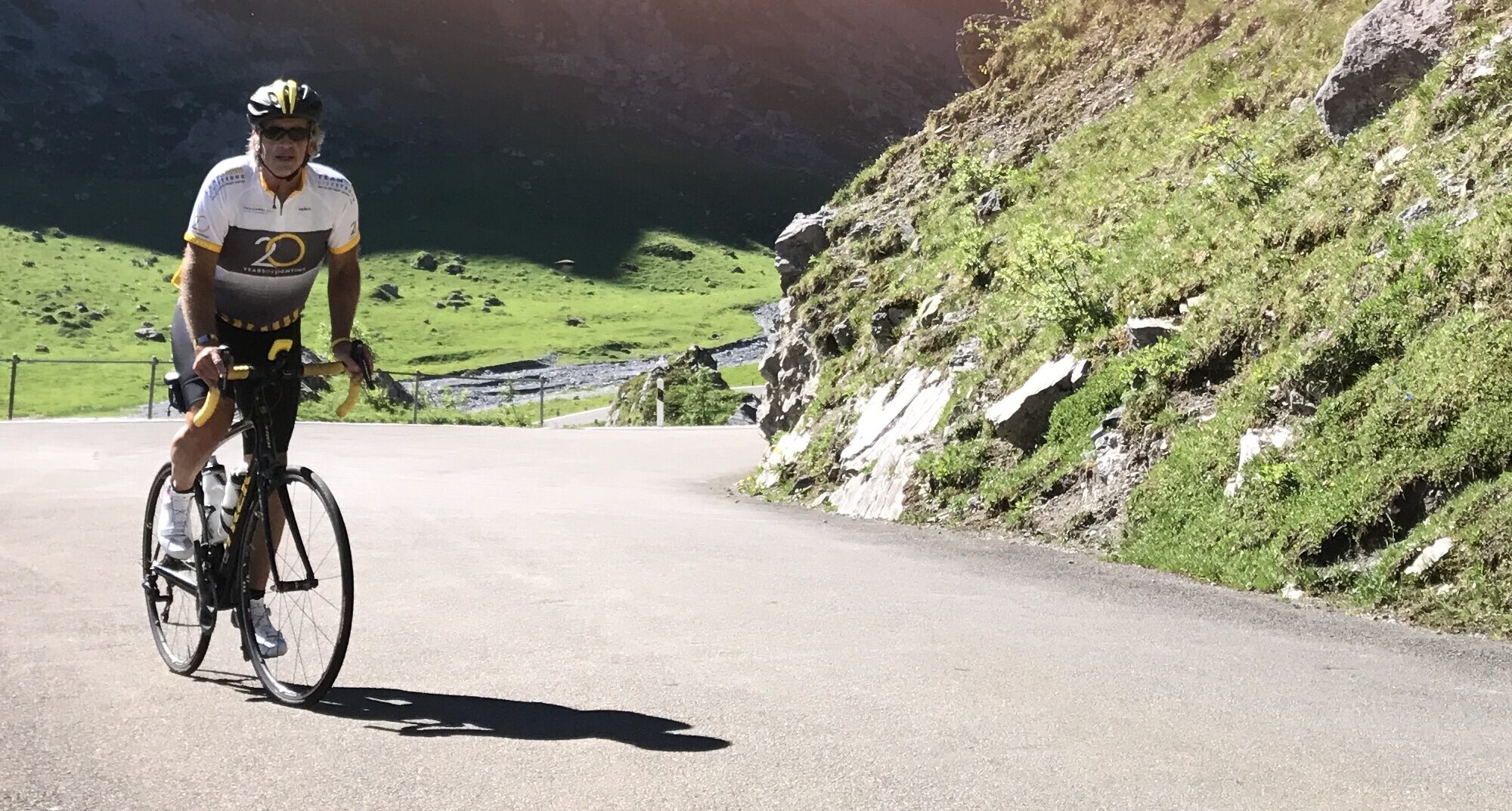 I am blown away at the view of Lake Lucerne and it’s hard to remember what an awesome day in the saddle it was. Or out of the saddle.

I began my day in Linthal. It was just 55° (13° C) at 8:00 a.m. I put on arm warmers which would last all of about half a kilometer. I was prepared for how tough a climb last night by meeting the couple from Zürich. I saw them this morning at breakfast too. “Tough,” he said.

I would be climbing the Klausen Pass. I studied the route map and knew what exactly to expect. Just not cobblestones.

I would normally ride without stopping but I figure this will be the only time I am ever here. So I said I would stop for photos. The first was the snow shed and I also turned on my lights.

The snow sheds had windows to the outside world and breathtaking views. However, I did not capture enough. As I climbed higher I sometimes thought there would be better vistas only to find the road went straight into the forest and I was no longer able to see the valley below.

The climb up to the pass was 23 km. At 10 km it was a plateau (mostly), sort of like Big Meadows in Skyline Drive in Virginia. To the right, I could hear the symphony of cowbells playing in the distance. I wondered if they needed a director.

In the plateau area, a false flat mostly for about five kilometers, are free-range cattle.

After the second section, the road kicked up again to the summit, this time about eight kilometers.

The solitude of the climb was interrupted by motorcycles passing me, one within inches. In addition were lots of sports cars, Porsche, Jaguars, even saw four Deloreans. Unfortunately, many drivers treated this road as their racecourse.

On the climb I passed two cyclists, a man and a woman, and got passed by three, two men and a woman. And 203 motorcycles.

I would characterize the climb as hard but not the hardest. Four climbs: Mount Washington; Hurricane Mountain Road (NH); San Pellegrino (Italy); and maybe Henrietta Road (PA), all brought me to my knees making me think I should quit. This ride never did it. It was just a slog, a 2.5-hour slog to be sure, but I knew I would make it.

With the hard part over and drenched in sweat, it was time for the easy part of the day. The descent.

I thought I might bomb the descent but instead took it easy. The words of Wayne Stetina resonated with me when he told me four years ago that he never bombs a descent he hadn’t seen before. I decided I would take it easy.

I stopped frequently for the views. In addition, the road was too beat up and too windy to let the bike roll.

I descended into Altdorf, a beautiful town. And then I saw it. Lake Luzerne.

Leaving town I found the bike path to avoid riding with the cars in the tunnels, of which there were five or six.

The one thing to watch out for is bike paths could become sidewalks without notice. And there are penalties (fines) for riding on the sidewalks.

As the road got closer to Brunnen it was harder to determine where the bike lane was. But I managed to find my way, at times following two locals (I presume they were local).

I came to a small stadium for FCB (Footballclub Brunnen). Either it was too late in the match to collect admission or the game was free but it was free for me. I wanted to see the referees of which there was one. Two thoughts: I was surprised they were using just one referee and my refs in Woodbridge are better.

The rest of the ride was lakeside to the ferry at Gersau. What a beautiful road.

Onboard I saw a cyclist. Everything about her could have been American. She was on a Cervélo bike (which is Canadian and more likely in the U.S. than Europe), wore a Specialized kit (based in California), rode Speedplay cleats and had a Garmin 500 GPS. But she was a local who ride halfway around the lake (60 km) then took the ferry back.

Disembarking at Beckenreid, I saw the hotel and rode right past it, looking for the Klewenalp. This where Ashley and I went with Ben Z. seven years ago.

I found it, then bought some ice cream and watched the paddle steamer. We rode that boat in 2010.

Only then did I check into the hotel. I was told when my luggage was dropped off the guy wondered if I beat him. He said I always do. I didn’t know it was a race. But actually I arrived an hour earlier and had spent the time riding around. Tomorrow he doesn’t stand a chance.

It was a warm (hot) day. The hotel had their own private beach access to the lake. I went down and dove in. It. Was. Cold! I forgot I was swimming in glacier water. I did not stay in the water more than 10 minutes.

In addition to first class accommodations, the staff here was the best I found in Switzerland. There’s not too many places I would say I must return to but I would love to return here.