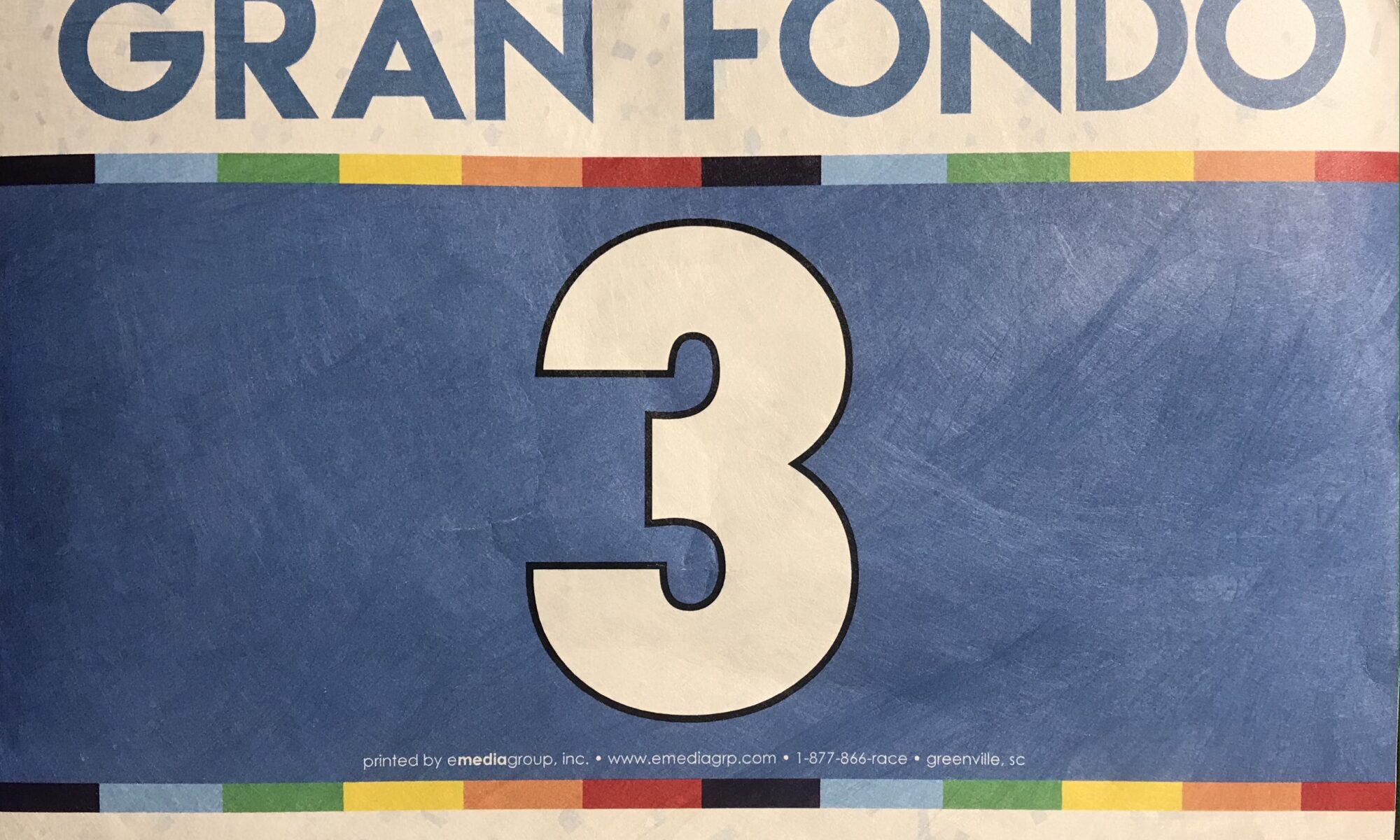 I did not have a good feeling about this weekend. Tires, like most bike parts, have been in short supply since last year. It caught up to me on Monday when I had a flat on my front wheel.

I bought replacement Schwalbe tires and installed them on Thursday. On Friday I rode to Fosters in Manassas. While I was eating the rear tire went PFFFFFFT. That was strange for a new tire but I pulled out my repair kit, put in a new tube, and was ready to roll.

The tire held well despite only 40 psi. I stopped at home, brought the pressure up to 90 psi, then finished my ride. After I put the bike back the rear tire went PFFFFFFT. I changed the tire and one hour later the third new tube went PFFFFFFT. Well, it was time to learn my lesson. I inspected the wheel and saw there was a hole in the rim tape. It was 7:00 p.m. on Friday and no place for repair. I would travel to Harrisonburg with a wheel needing repair.

Yesterday I went Rocktown Bicycles in Harrisonburg. This is a very nice shop and Sean greeted me. I told him what I needed and in 10 minutes I was out the door and ready to roll.

My alternative was that I went to Brothers Craft Brewing and then the Hotel Madison, two locations we had used in the past. No ride. Since registration was at 2:00 p.m. and I decided to ride around town. And that was OK because I did not need a 30-mile ride before the Alpine Loop Gran Fondo.

I stayed in town at Tru by Hilton. Who uses alarm clocks? Well, the guest before me, that’s who. At 5:00 a.m. the alarm went off. I was not ready to get up. And I didn’t know how to turn off the alarm. I unplugged the clock and started my day with one less hour of sleep than planned.

I drove to the venue after thinking I would ride there. But U.S. Rte 11 looked sketchy (curb to curb, no shoulder). Once I arrived I got my timing chip and then heard my name being announced as the top fundraiser. I went to the mic and told my “secret” to raising money. “You have to ASK people.”

The choice today was 78 or 100 miles. These are the same routes except for the addition of a 22-mile loop. At the start I wasn’t “feeling” 100 miles. I got my bottles ready, grabbed some food, and went to the starting area. It was 48º. I put on a vest and arm warmers.

We rolled out of town. Once we turned on Switchboard Road I let people pass me. The road is crowded and it’s tight. I just don’t trust the big group. And I had a bigger goal. At 10 miles into the ride I would “celebrate” 1,000 consecutive days of riding at least 10 miles. I didn’t want to be taken down in a crash which almost happened beside me when a rider clunked his gears, came to a start, and was almost rear-ended.

Also, further back was Robert Hess. I pulled over to wait for him. I didn’t see him so I continued. But when we came to At Whitmore Shop Road I waited for him to arrive. We chatted for a few minutes and then he went left and I went right. I already let the main group gain 4-5 minutes on me.

I told Ashley and Bryan they could expect me to roll by at 9:00 a.m. And at 9:00, I saw them up ahead on a pull-off area just before George Washington National Forest. They had signs cheering me on. I stopped for about five minutes, gave the girls a hug, and told them I would see them at the top.

I hit the climb which is a timed KOM segment. After four or five minutes I looked at my Wahoo computer. I was only eight seconds behind my all-time best which was 10 years ago. I had no idea.

Another minute or so and I was only down six seconds. I started to think that maybe I could get a PR. I was 10-12 minutes in when I saw I was ahead by two seconds. And I was catching people. I was feeling good. Every previous attempt I was trying to count the distance to the top. Today I didn’t even notice. Everyone up the road was just a new target to reel in.

In all, I caught and passed 11 people on the climb and did not get passed by anyone. Of course, I was almost dead last when I started so who was left to pass me? I was up 1:02 when I reached the top. A PR! I was very excited.

At the top, the girls were waiting for me. My day was made. No matter what else happened I PR’d Shenandoah Mountain and I saw the girls on course. It would be a great day. When they told me that they would be in town in the afternoon I decided I would do the 78-mile ride so they could see me finish.

I bombed the descent on Rte 33 to Brandywine. I made it over to the rest stop which is at the base of the climb up Reddish Knob. After a short break and a small can of Coke, the climb began. I don’t know what happened but almost immediately I was 40 seconds behind my best time. But the time began to come down. And I was catching and passing people. The Live Tracking on my Wahoo stopped working and I would have to wait to find out if I set another PR. (I did.)

I passed two girls from the Miller School of Albermarle. I had been chatting with them at the rest stop and they were pulled over. I really admire these young kids. Since they weren’t in immediate distress I continued on but decided when I reached the top I would turn around and go back to shepherd them up the climb. I passed the KOM finish but realized it was about a half-mile short of the Strava segment. So I had to keep going to the end when I could turn around. In all, I passed 10 riders on this climb. I was passed by no one.

Going back down I met the girls then turned around. One of them had to stop to take on a gel. But other than that they were riding well. When we reached the summit we started down Reddish Knob. I warned them the pavement was crap but they did not heed the warning. They flew! At first, they gapped me but I eventually caught on. They were taking too many risks for my liking as I hung on.

As the road started to level out, we slowed down and just chatted. As we left the steeper part of the mountain which was mostly traffic-free, I went to the front and they stayed on my wheel until we reached the next rest stop together. They told me they were riding the 78-mile route.

Actually, I was feeling good enough now to ride the 100 but had the granddaughters waiting for me in town. I texted them that I would finish between 2:30 and 2:35.

In the valley I saw lots of Amish, at one point maybe more than 30 buggies pulled by horses. I passed one buggy, announcing my presence as loud as I could so I did not spook the horse. I waved at very single one that passed me in the opposite direction and almost all waved back – and smiled too. The time was 1:45 and they appeared to all be headed to a 2:00 gathering.

Most surprising to me was a young Amish man passing me in the opposite direction. I waved but he couldn’t wave back as he had one hand on his handlebars and one hand holding a cell phone to his ear. It appeared to be a flip phone, not a smart phone.

The last timed climb was Mole Hill. I wasn’t sure I would have anything left but saw that I got a PR on it too. And there were three more segments on the way back into town. I PR’d them all.

At 2:32 p.m. I came to the finish. The grandkids were waiting. I was introduced to the crowd but without anything that I had written on my application. We took a family photo and I hung out for a while.

After they left I checked Strava. PRs on the three timed climbs and all three I was in the Top Ten Age Group. Then I checked to see if there were any times better than mine in that list for today. And there was one. I found a guy who beat me by 2:00 on Shenandoah; 1:00 on Reddish, and I beat him by a minute on Mole Hill. So he got me by 2:00 total and I knew I was not the KOM for my age group. But I did finish second in my age group in the climb. And this year a sprint was added. I finished second there too. Maybe there were only two of us.

But I was happy. My best times were 10 years ago and who would have thought I could PR at my age? I am not a climber and this improvement was very satisfying. I accept that there are better climbers. I had a great day on the bike and a better one off the bike with my granddaughters.

Note: At the beginning, I was right behind a safety bump and was not clipped in to start. I awkwardly pushed off with my feet losing a couple of places and forgetting to start my Wahoo. This file is missing the first 0.4 miles.