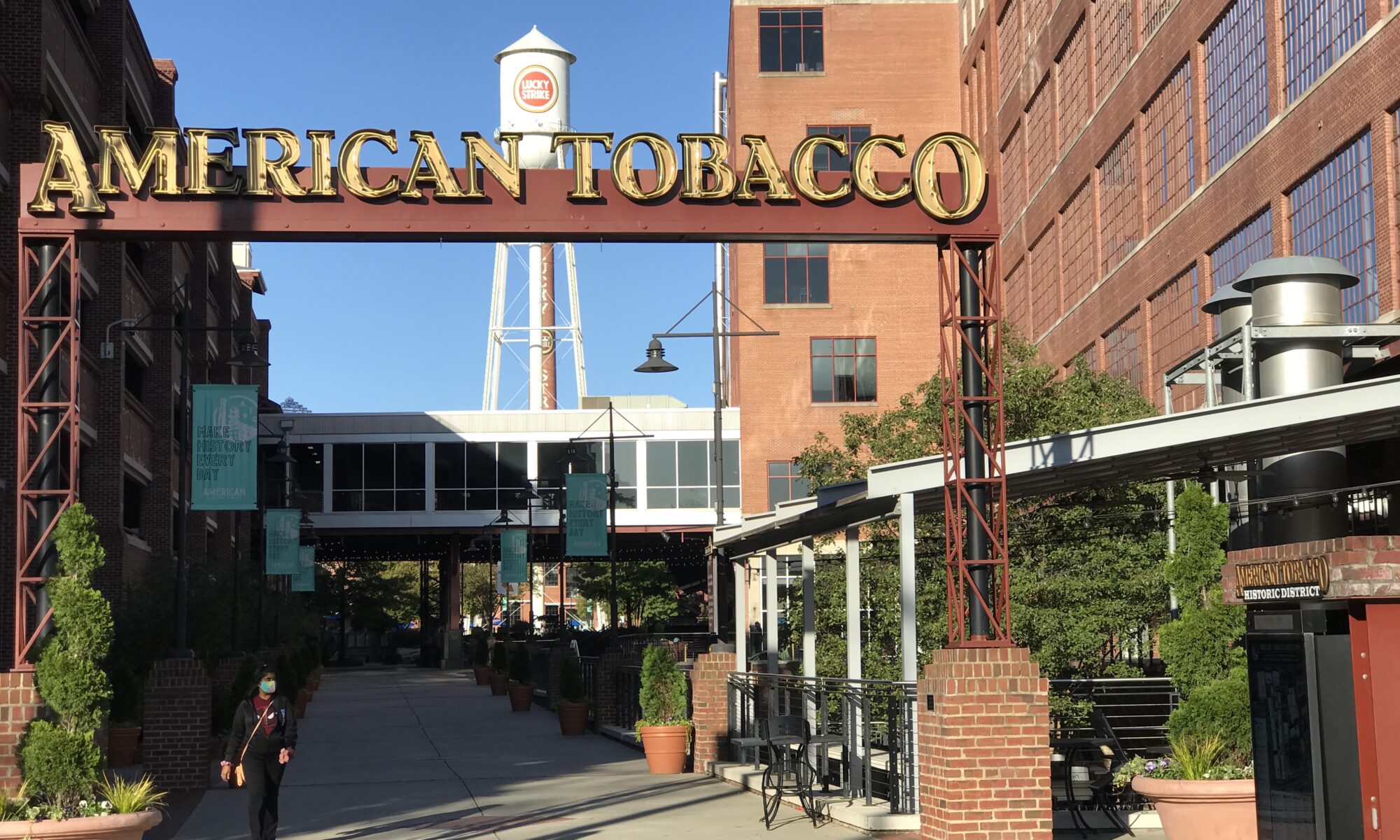 The trail loosely follows a rail line that was built in the 1970s for the American Tobacco Company. In the 1980s it was shut down. That wasn’t a good investment.

My first order of business was to find parking. There is parking in Durham at the trailhead as it is a shopping and entertainment district. Despite the offer of free parking for two hours, it necessitated downloading a parking app for my phone which I didn’t want to be bothered with. And I didn’t know if I would take more than two hours.

I looked for locations south of the city and found Solite Park. There was a playground and the parking lot was almost full. It looked safe enough. In preparation for this ride, there seemed to be a lot of safety questions on the reviews on TripAdvisor. Someone smarter than me can research this but this rail line divided neighborhoods, i.e., the wrong side of the tracks. But I was oblivious to that history and just rode my bike.

Solie Park was located at MP 4.5. It ad restrooms and a water fountain. I headed south on the trail. I was expecting rail trail – straight and level. However, as I would soon learn, in this section it was part sidewalk and often turned where one would not expect. Keep the eyes open for turns.

The bridge over Interstate-40 was pretty cool. It had its own contour instead of being a flat bridge. For this user, it was pretty awesome.

Around Mile 8 I seemed to come to the real rail-trail portion of the trail. Straight and flat. Not real sure of the location except it’s the Huntington Ridge section of Durham. It’s really a one-mile section where one is seemingly on sidewalks and has the feeling of an urban trail rather than following a former rail bed. This often happens that development takes place after removal of tracks and before a rail trail is created. These detours are a minor inconvenience compared to having use of a 20-mile trail.

Mile markers were provided every quarter-mile which was very cool. At 14.5 the trail turned to gravel so I turned around.

The city of Cary had a nice lot at New Hope Church Road and if I ever rode this again I would come to this lot. There were also restrooms here as well. The trail has more restrooms and water fountains than any I have been on.

When I arrived back to my car I saw the trail was closed for a detour. It wasn’t a new discovery as I had driven through a construction zone to park there. It was part of the reason I started my ride heading south as I could navigate the detour later. The parking lot was almost empty. I wanted to ride the 4.5 miles into Durham but was concerned this was one of the high crime areas that I had read about (one user said police were making more patrols).

But when I got to the main street (Fayetteville Road) to follow the detour, I was lost. I could not find the detour, and not being from the area, didn’t really know where to go to pick it up. I wasn’t about to set out on a trail that wasn’t well-marked. I put my bike in my car and drove 1/4 mile where I saw the end of the trail detour was. From there I parked and rode the rest of the way into Durham.

As I got close to Durham, I went across at least three, and maybe four, bridges or trestles with great rickety boards. They really made a racket. The closer to Durham the louder the bridge that I rode across. This was awesome, actually.

The downside was around Mile 2 I went through a litter-strewn section. There were some men hanging around. I’d say it looked like a homeless hangout. Nothing wrong with that but it didn’t feel safe although I went through it, twice, with no issues.

Bottom line – very nice trail. For this ride, the detour section was not well-marked but that will be temporary. There was the one-mile section where the trail zigged and zagged but just take it slow and watch for lane markings. The users all seemed courteous and it was surprisingly busy on a November weekday. My recommendation for others or if I am in the area again, is to park at the New Hope Church Road Trailhead.