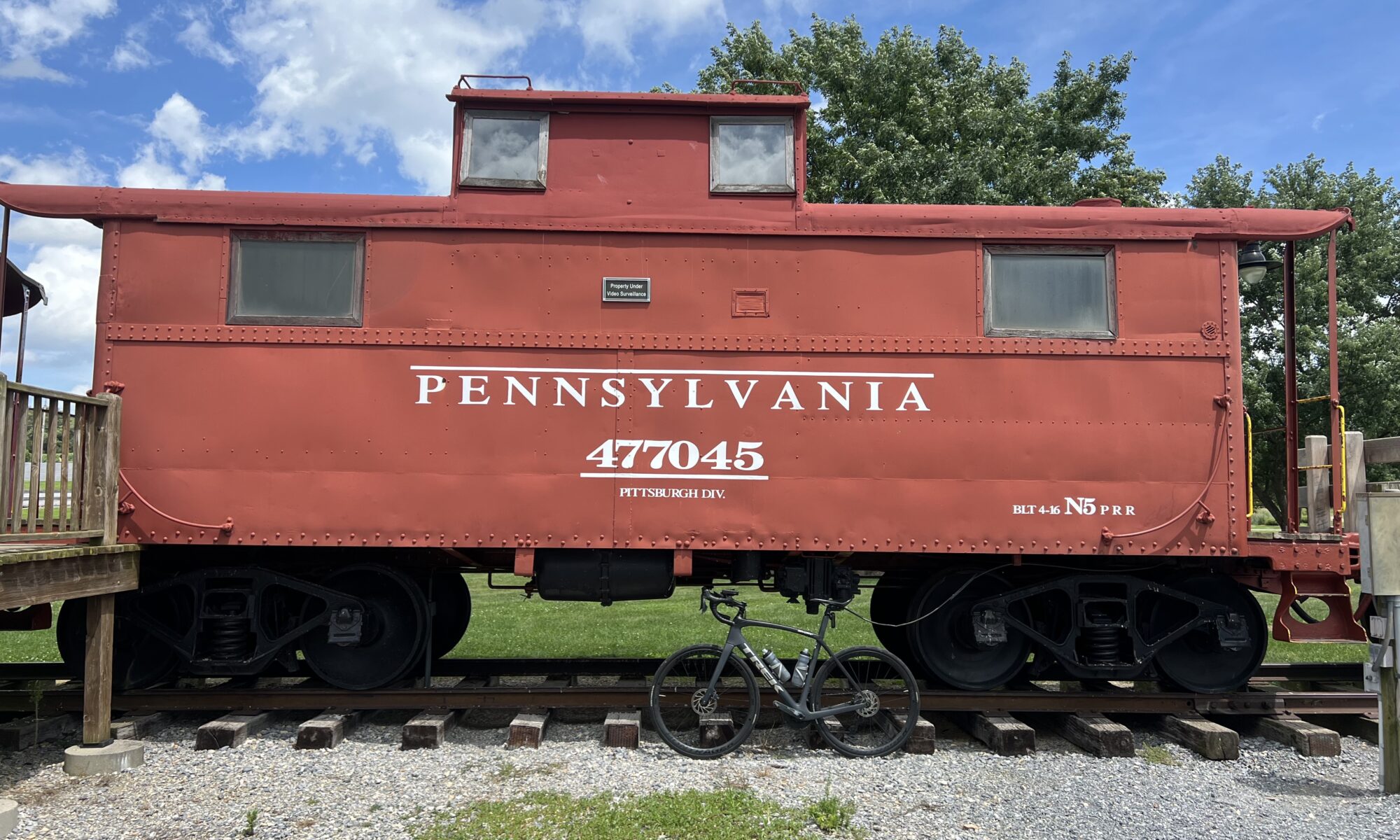 Ultimately, this ride will simply be another day on the bike, another loop ride. It was done on flat to rolling roads in the heat. But it was the approach to the ride that has left me wondering.

My drive here was on U.S. Rte 30 from Breezewood to Chambersburg and was it ever pretty. And mountainous. Descending off Tuscarora Summit there are two runaway truck ramps and not just one. I was thinking of the bike race of 14 years ago and can’t locate a race map for that stage from Camp Hill to Bedford.

The description for Stage 3 included Tuscarora Summit and Sideling Hill which are on U.S. Rte 30. What I can’t fathom is that the route stayed on Rte 30 through Breezewood. I can very carefully ride through Breezewood on my bike but for a race, you’re talking about shutting down the entire road. And not just any road. This is the intersection of Interstate-70. They would not shut down an Interstate Highway for a bike race. They must have turned off near the top of Sideling Hill and were able to divert around Breezewood.

But that is a beautiful road and very mountainous. The average speed of the winner, James Driscoll, was 39.62 kph, which was faster than David Velleux, the winner the following day into Latrobe (39.03). It’s hard to imagine that Stage 4 was slower than Stage 3 but it was.

While driving across these roads and not imagining that I would or could ride a bike here, I have ridden the mountains from Bedford to Ligonier on multiple occasions which were featured on Stage 4. Maybe someday I’ll ride Tuscarora Summit

But today I drove over these mountains to Chambersburg. I had found a route on RideWithGPS created by Franklin County Cyclists. It looks like it was a club ride and I would make one modification – two if I count the one I made at the finish.

The ride started in a church parking lot. On a weekday, I’m unsure if I wanted to park in an empty lot without permission. But on a Sunday, I really didn’t want to park in their lot while they were having church. I modified the start to be a shopping plaza next to the Giant (grocery). The high wall on the side of the building provided a perfect shade spot that a tree could not.

I started just one mile from the “official” start of the ride. The plaza was next to a Sheetz which was perfect for the pre-ride restroom. I did not make any modifications to the route so when I selected it on my Wahoo I simply had to select “Route to Start.”

Country. This was a 100%, well, 99% country ride. I was immediately in the country with the smells of cattle and corn. The roads were all lightly traveled and the traffic was 100% respectful.

There were no real climbs but plenty of ups and downs. But there was wind. A headwind would define most of the first half of the ride as it was a westerly wind.

There were no defining features such as a great bridge or tunnel. No summits with miles of views out over the valley below. I was in the valley. But there were nice valley views looking at the ridge of the mountain I had just driven over.

There was a nice park about four miles from the finish. Norlo Park in Guilford Twp. has three cabooses and what looks to be a minature railroad. I’m a sucker for things like this so I liked the placement of this park near the end.

I would characterize this as a valley ride. After all, I was in the Cumberland Valley. It wasn’t flat although there were flat stretches. But the constant rollers would start to wear on me although that was probably more the heat (90℉) and lack of nutrition. I went through two bottles I had on my bike, one filled with Skratch mix, and the other with water. I had one pack of Stinger Energy Chews. And that was it.

I thought around Mile 30 that I would stop at the next store and grab more water and a snack. But there was none. If I were to ride here again I would reverse the route. First, a reverse ride is a new ride. But more importantly, there was only the one store I saw on route. It was a Rutters gas/convenience store crossing US 30.

On today’s ride that came around Mile 18. Barely one hour into the ride it was too soon to stop. Or at least I thought. Is it ever too soon for a snack? And that was the only place I saw to stop. On the reverse course, that would be at Mile 28 and would be perfect.

I wasn’t 100% of the modification I might need to get back to my car. I could follow the route and then go back the mile to where I parked. As it turned out, the route as designed would have taken me to the plaza where I parked before going the last mile to the church parking lot.

With four miles to go, it started to rain slightly which was very welcome. But it wouldn’t stay with me. But fearful I could get soaked, and that would not be welcomed, I ended the prearranged route and selected “Route to Start” on my Wahoo. Unbeknownst to me, it would have been the same exact route except when I reached the plaza where I was parked I was finished instead of going the final mile to the church. But I felt more comfortable knowing I was routed to my car even if it was the same way.

Nice country ride. Maybe in my travels through or near here I will ride it again. In reverse.