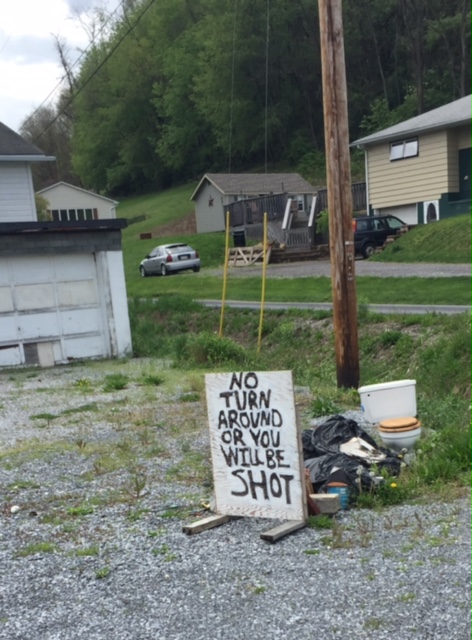 Seven years ago, almost to the day, I parked in East Freedom and rode up Blue Knob for the first time. Today’s circumstance would be different.

I was traveling to visit my father in the hospital in Johnstown and I thought this would be a nice way to honor him. Needing gas, I filled up at the Sheetz in East Freedom and then requested permission to leave my car for 90 minutes for a ride. Permission granted.

I rode over to the house that we lived in in 1958-1961. I took a couple of pictures then headed up Rte 164 towards Portage. The climb begins almost immediately although the first couple of miles it is mostly in the 3-4% range. It is a highway, but a mountain highway. The road has no shoulders but relatively little traffic and all gave me a wide berth when passing. The upper portions seemed to hold steady in the 10-12% grade but with the curves none of the traffic was going too fast either. At the top I stopped for a photo op with Lady Liberty. The surprise is no longer there as it was seven years ago but it’s nice to take a picture. From the top it’s all downhill to Newry. The road was a little rough but a nice ride. I wore arm warmers and was glad as it was a little chilly on the descent.

I continued past Newry to Reservoir Road then headed back to East Freedom. It wasn’t a long ride, just 21 miles, but all that I had time for. One good mountain climb and a quick visit to one of my childhood homes.

I drove to Somerset, picked up my mother, then we went to Johnstown. In the hospital I showed my dad the picture of that house and he was glad to see it. That made the ride very worthwhile.