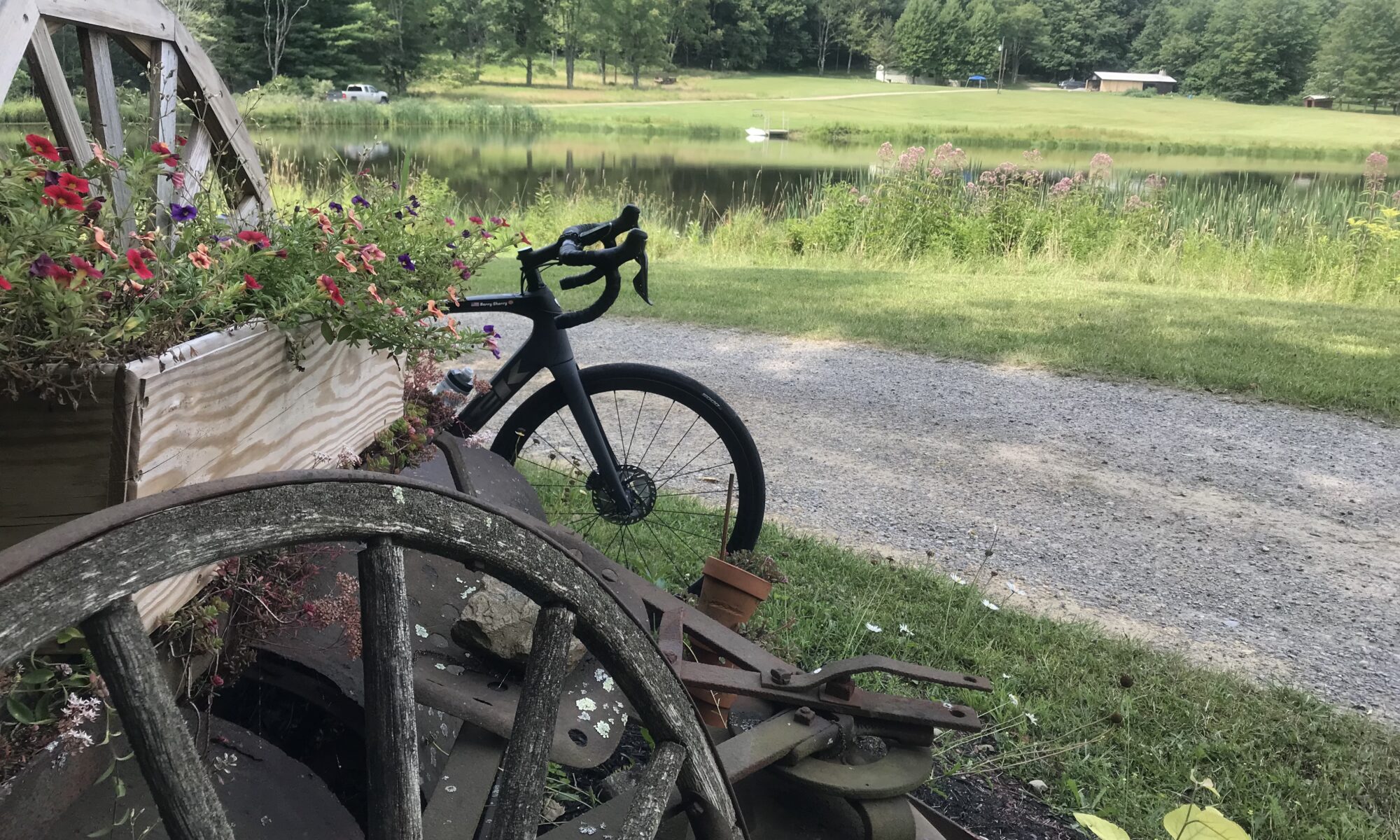 I seem to be measuring my rides on average speed. Throughout much of 2021, my rides have mirrored what I did 10-11 years ago (which is basically when I really started tracking such things using GPS). And then there is this ride, Somerset to Punxsutawney. I averaged 16 mph in 2010 and have never gotten back to it. Is Father Time winning?

About today: I parked at Team Kia in Giestown (with permission). From there it is a five-mile descent to Johnstown before the real ride begins. This is the first ride I have done using Strava Live Segments so I had targeted some segments to “race” today.

The first was the climb out of Johnstown that begins in East Conemaugh. And it did not come in. So I rode the climb at tempo but never going too deep. The result was my second best time (14:30) which was only surpassed by my ride in 2010 (14:09). I am pretty confident that I could have squeezed out 21 seconds if I knew my progress. So this may have been a win.

I was plagued throughout my ride with Live Strava Segments that did not appear where I expected them. This evening I figured out why. I had a new Wahoo and did not set it up with Wifi to connect with my mother’s Wifi. So any segments I set up or selected (starred) yesterday did not sync when I selected sync. Operator error.

I had a surprise segment in Vinco (PR) but could not get the Station Road Climb segment in Twin Rocks. That was set on a dedicated ride three years ago in which my goal was a PR. And in 2018 it was also near the beginning of my ride.

I buried myself pushing the pace. Finally, I saw the time – 11:09 PR. Missed it by one second. What an effort. Then I told myself that what I saw was a provisional time and maybe once uploaded I would gain one second. I was shocked when that actually happened. And I was even more shocked to see that the KOM was 11:09 and not 11:08 which I was fixated on. I got a well-earned KOM. This segment can best be described as a time trial segment more than a sprint or a climb.

I went reasonably deep for a PR on the Blue Goose climb to Nicktown and got it. And I also got a KOM on the downhill from Nicktown to Northern Cambria. But only by six seconds and since this is not a Live Segment (more than -0.25% grade), I could only hope that pedaling the entire way would earn those seconds.

In Northern Cambria, I stopped at Don & Nancy’s house even while figuring they were out of town. Then I headed to Sheetz. I filled my bottles with ice then bought water from their cooler.

In Cherry Tree, I passed the fair Cherry Tree Days where a banner proudly displays ALWAYS THE FIRST WEEKEND IN AUGUST. Trying to keep a good pace I did not slow or stop to take a photo.

Here the ride gets tougher. It’s all up and down (mostly up) and the roads are “heavy.” I did set a KOM on the Williams Road climb but I am the only cyclist who ever recorded and uploaded to Strava on that road. I was getting tired and by the time I did the last stretch to the “Crossroads” (which is where my great-grandfather, John T. States, lived, I was toast. Done.

It is time now for reflection. Maybe chasing segments left me more drained than just riding along. Or maybe Father Time is reminding me, Father Time is Undefeated.

Weather certainly affected some rides as I was caught in heavy rains a couple of times. I also think, strangely enough, that the longer rides starting in Friedens or Somerset were a bit easier in that they had 15-20 additional miles that trended downhill to Johnstown whereas stating in Geistown is almost starting in Johnstown.

Using the ride in 2010 where I averaged 16.4 mph, RideWithGPS shows the average grade was 0.7% Compared to today’s Geistown ride which was 1.2%. So that could explain most of the one mph difference between the two. Of course, so could competing for KOM segments. I was drained after the segment to Duman Lake and it wasn’t too long before I had to start the Blue Goose Climb. Ending in Nicktown it was only one mile before the descent to Northern Cambria. So chasing segments may have been an overall negative. But getting a higher speed on the segment may have helped out. Who knows?

Another factor that is hard to quantify is rest. Yesterday I set four PRs climbing over Ray’s Hill tunnel in Breezewood. My legs felt like Jell-O to start. So how the legs feel leading up to the ride, nutrition both prior to plus while on and off the bike, weather (heat and rain), will all be a factor in how I ride. Plus age – but it doesn’t look like that’s a factor here.

And maybe the final factor is the amount of time I spent sightseeing or stopping to take photos. Today I did not just motor through Johnstown but turned and went over to the Inclined Plane. Likewise, in Northern Cambria, I went to the Lowmaster’s house then went to Sheetz, making a couple of U-turns in the process. No hurry at all. In 2010 I went straight through Johnstown with no sightseeing stops and the same for Northern Cambria. Today’s sightseeing added 1.5 miles but also took 18 minutes. Adding that to the 2010 trip and my average speed would have dropped to 15.8.

I’m not sure what it means but I will include heart rate. Today my average was 136 bpm. My high HR was 174 which was on my “time trial” from Belsano to Duman Lake. Looking back 11 years my HR was 132 bpm and my max was 166 which was on the climb out of Glen Campbell (I missed a turn). I think this is inconclusive. An out of shape rider may have a higher HR than someone in shape. Or if one works harder than the other that could also be a factor. But the work rate as measured by HR was about the same. Maybe I need power meters?

One other comparison. From the bridge in East Conemaugh to Trojan Road (Arcadia/Glen Campbell). It is 41 miles. Both times took me 172 minutes (2:52) at an average of 14.4 mph (it trends uphill beginning with the climb out of Johnstown). Looking at this metric, I rode the same today as I did in 2010 which was my best time ever. And maybe, just maybe, if you take out the eight minutes in Northern Cambria today riding over to Sheetz, then I rode better today.

Also looking at this metric, maybe I didn’t have a great tailwind in 2010. Maybe that was the standard and I matched it today, some 11 years later.

When I did not come close to my 2010 speed I was bummed. But looking closer, I posted a good speed today for the Appalachian Mountains. The difference between total speed between 2021 and 2010 can mostly be explained by the sightseeing component and some by eliminating the long time trending downhill by starting in Friedens.

Father Time is coming for me – but maybe not as fast as I feared. Back off Jack!