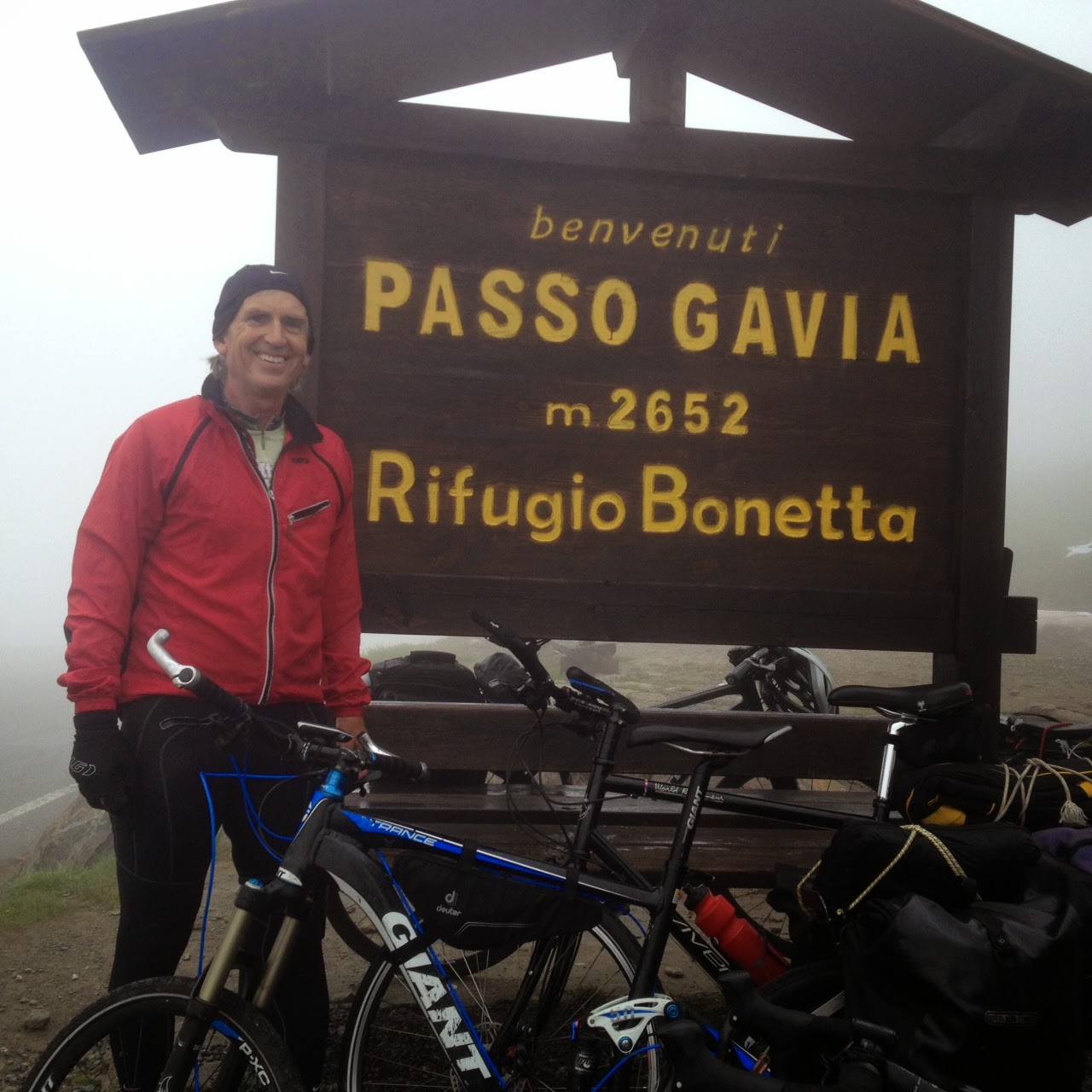 I wanted to add Mortirolo to my list but that will have to remain unachieved. Left to my own devices, I would have ridden it and almost decided to without support. But it was better to be safe than to be sorry, especially on the mountain called the mountain of death.

The original ride was to be a loop ride with Mortirolo around to Gavia Pass and then a descent back to Bormio from Gavia. Instead of the loop, we were given a choice to ride to the Gavia pass and back. The beauty of an out-and-back (or up-and-down) was is that it is all uphill. Anytime we felt like turning around we could have. And this was good. This was the iconic climb where Andy Hampsten rode into history during a blizzard in 1988. Or we could not ride at all.

Last of the group leaving again, I always seemed to misplace something or needed one more item. Our group left and I chased, although it was not far before latching on.

For most of this week I rode with somebody. Only two of us came with nobody and today I rode with Colin Giffney (the other person who had no one) and Caitlin Steel. I was sweeping and felt better chatting with the last folks rather than simply riding ahead.

Although it had rained in the early morning, it was overcast and at first, I was overdressed. I stopped to remove my jacket and rode only in my short-sleeve jersey.

On the climb, Colin decided to really enjoy the memories of Stelvio and not suffer today. He turned around and went back. Caitlin and I continued and were joined by Jim Ashton, who had stopped with his son, Chris, earlier. So Jim, Caitlin, and I made the climb together, talking the entire way.

Our first day on this trip was a simple up-and-over in which I rode the ascent with Caitlin and her husband, Nick. The second day, our first real climbing day, I rode the first climb mostly with Chris and Jim. Looking back at the week these were the folks I rode with most.

Today’s climb was steady. There were sections that got to be a little bit hard, I saw 15% or 16% on the Garmin, but we went up together. On the lower section, I was wearing just my jersey but stopped to add my jacket as we got higher. I was now underdressed. Severely.

At the top of the climb it leveled off, still a climb but only 1-2%. And it started misting a bit.

As with many passes, there is a restaurant at the top and our folks from Trek Travel provided lunch for us plus a fireplace to warm up and dry out. For the descent, I changed to mostly dry clothes. It took me a week but I learned to include a dry jersey for the descents although today everything would soon be wet again.

Inside the restaurant the lunch was great. Many of us ordered soup and we all wanted to sit by the fireplace. My phone had died completely and I could no longer take any photos. I asked someone to take some photos inside and share them – but got none. It was, as might be expected, a tribute to Hamsten’s ride in 1988.

(Here I was tempted to grab one of many images on the Internet but any user can search and see Andy riding through the snow on his way to Bormio in horrific conditions. He did not win the stage – he finished seven seconds down behind Erik Breukink but had enough to take the lead in the Giro d’Italia. A great account titled Gavia 1988: Andy Hampsten’s Epic Stage, may still be available at PEZ Cycling News. It’s worth a read.)

Headed out, it was raining. Cold. Fog. Visibility was poor, maybe 75 meters. One of our riders headed down in the wrong direction. Ouch.

As I started my descent I passed three or four high school-aged boys coming up the mountain, all pushing their bikes. What a reminder that not everyone can ride up this climb. I gave thanks for good health and strength.

I passed three of our riders descending very cautiously then was on my own for a while. Not ironically, I was later joined by Chris and Jim and two others. If they wanted to ride faster today I was willing to let them. Slick wet roads were no fun. But we all settled in and took it as fast as we could cautiously go.

It was here the realization set in that I would suck as a professional rider. Besides not being able to keep up with the peloton on the climbs, these guys take incredible risks on the descents. The thought occurred to me as we descended that if I was racing and someone wanted to go faster than me in these conditions – I would let them. Maybe as a 20-something I would take the risk but as a 50-something I was happy staying upright on the day. And cold.