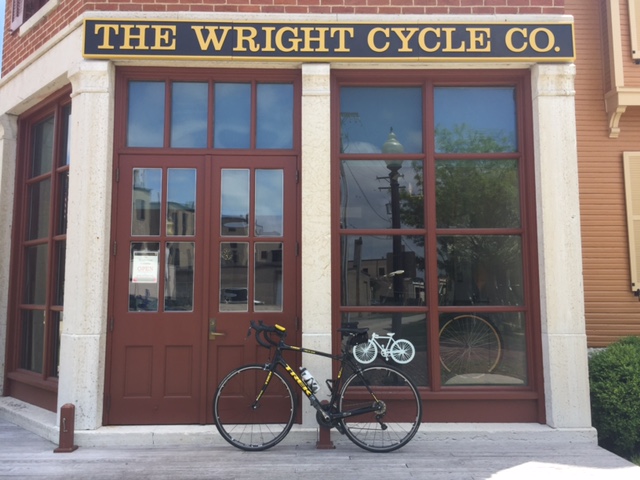 I was excited about riding the Great Miami River Trail in the Dayton area. I wanted to ride next to the river and find the Wright Cycle Co., the historical museum site for the Wright Brothers.

I thought I would park at Deeds Carillon Park in Dayton. I figured it was safe and, as an added bonus, was probably 50 years since we visited as a family. It might be neat to see it again. I drove out to the Dayton National Cemetery. I found my gravestones then headed towards Deeds Carillon Park. On the way I looked up and was besides the Wright Brothers’ Museum. It was a no-brainer, I would park there. There would be no Deeds Park for me today. Last year National Geographic aired a series called American Genius. The episode called “The Contest for Human Flight” documented the Wright Brothers vs Glenn Curtiss “the World’s Fastest Human.” My daughter, Ashley Snow, had a cameo appearance walking past the Wright’s bicycle shop. I knew I needed a photo in the same location.

I went into the visitor center and as greeted by a nice government worker wearing a beige and green uniform. She told me that this museum was covered the Wright Bros. up to their flight at Kitty Hawk. There was another museum across town that covered post flight Wright Bros. She also told me that in all, Orville and Wilbur owned five different bike shops at different times.

She called another ranger, Casey, to come open up the shop for me to tour. I wish I had asked a question about the history of the building. Which shop was this? Then what, store? Warehouse? Residence? Vacant Building? What involved in getting it restored? Oh well, maybe I have to go back.

After touring the Museum, I headed out to find the trail. I only went a few blocks before I was at the river. I found stairs down and then started up the trail. Many blocks in this area were closed but this was open. I didn’t go far before I saw how crappy the trail was. Rocks. Mud. Three to four inches deep at times. It was not enjoyable and I soon climbed out of the river basin.

I made my way into the city of Dayton although it was more like dipping my toes in Lake Erie. I didn’t see much. I found the trail on the east side of the river and it was torn up too.

But I finally found a way out on the trail and rode north. I knew I’d be riding later in the day and didn’t want to go too far. The trail became more remote. The farther from the city the better it was. I turned around. I mostly retraced my ride back to the Wright Bros. Museum. Once finished it was off to find my favorite part of Dayton – Skyline Chili. One Reply to “Great Miami River Trail Part I”