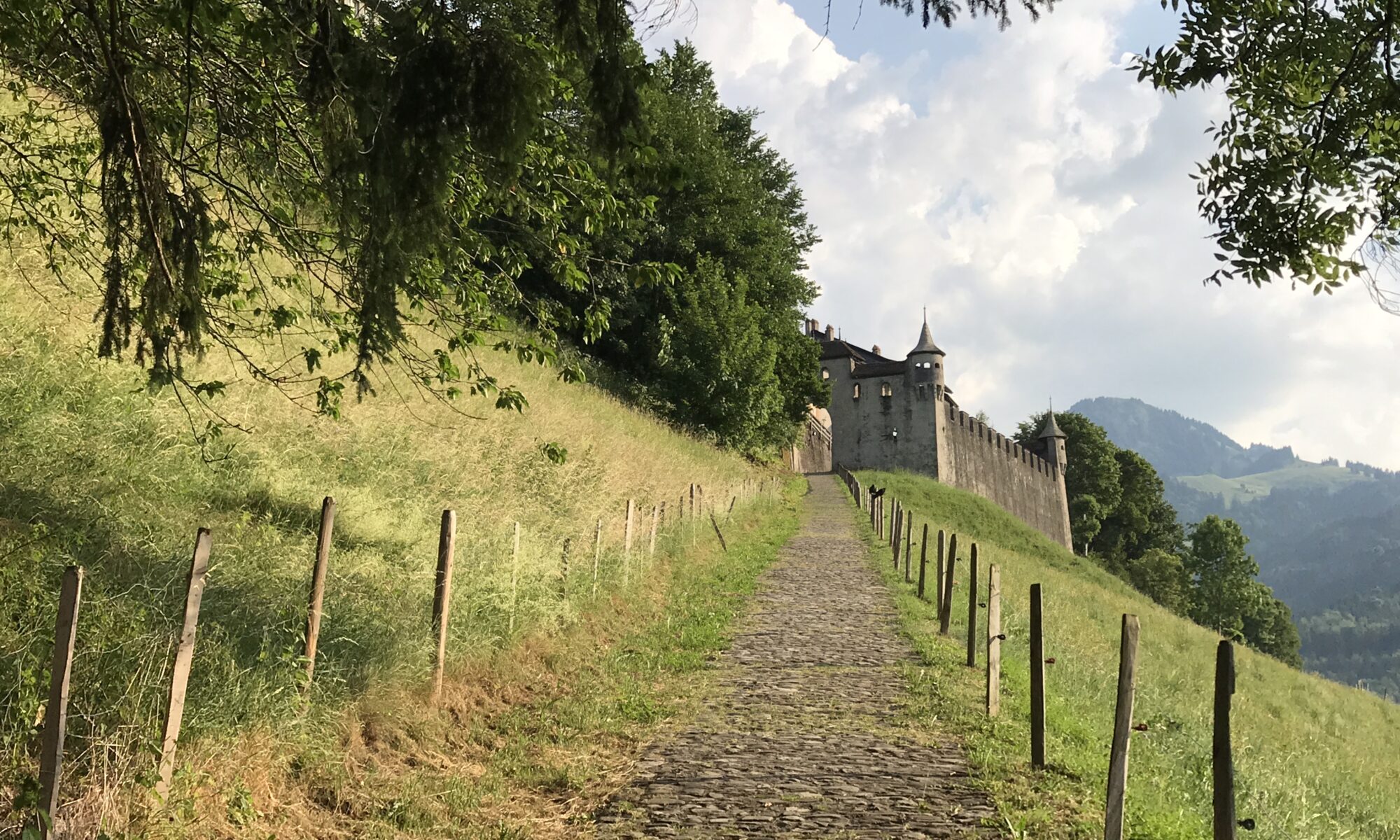 As I got ready to go outside the hotel there was a group of Chinese tourists. One by one they told their friends to come over and lift my bike. Then gave me a thumbs up.

My plan was to follow the Bike Rte 4 signs first and the GPS I had mapped out second. And that mostly worked. Each night I looked online at Bike Rte 4 then tried to duplicate that on RideWithGPS.com and then download that to my Garmin bike computer. I didn’t always get it correct.

The first 5-6 km in Thun were pancake flat. Then, boom!, the road turned up. First I was on a small highway then Route 4 turned to a paved farm road. And it kicked up. Short but up to 18%.

This was mostly an uneventful day. Halfway through I had a great descent out of one village – the kind you know the road is going to bottom out and kick up again. It was a great descent and beautiful forest as well.

It did. I went over a river just past an out of commission covered bridge, and entered the canton of Fribourg.

Fribourg city was an adventure. I followed the signs for a while but at the top of a bridge/retaining road was a traffic circle. The way back on Rte 4 was marked with an arrow but the way forward was not. I had to choose. I chose wrongly. I guess I made a turn at the traffic circle and, in the absence of a sign, should have gone straight.

Sometimes when I choose wrong, if my GPS file is showing I am parallel to where it thinks I should be going, I just keep going hoping they will come back together. It was clear I was blazing a new trail in the wrong direction.

I stopped at a bike shop for directions. They weren’t perfect but they got me onto the trail where eventually I picked up a sign again. In all I probably spent 30 additional minutes in Fribourg trying to pick up the scent. Maybe even longer.

The day was mostly full of rollers. And lots (five) of covered bridges.

It was pretty but did not come close to matching the scenery on Day 3 going up Klausenpass to Beckenreid. And there was this one kicker near Gruyères that went up over 20% but was no more than 75 meters.

In Gruyères I found a bakery. I got a roll and some salami and a big bottle of grapefruit soda. Then I climbed the hill to the castle. Or chalet. I didn’t know it at that time but that would be my dinner.

Although the man who dropped my luggage in Thun asked if it could be ready at 8:30 a.m. (instead of 9:00), I still beat my luggage to the hotel. I wasn’t going anywhere. In fact, I just took a hot shower then sat naked on my bed until my clothes arrived.

In the early evening I decided to walk down into town. Clothed. By down I mean down. Two mountain bikers were coming up that old cobbled walkway. Chapeau!

Although there was a restaurant in town and a few at the chateau by where I was staying, I didn’t feel like paying the high prices of dining out. The bakery closed just 15 minutes earlier. So I decided I was done eating for the day and would wait for breakfast.

Dining out in Switzerland is generally expensive. On my third and fourth nights I had nice dinners but at a cost of 35-40 CHF ($36-$42) each. For one.

But last night’s meal at McDonalds (8,90 CHF) in Thun and skipping dinner tonight would be kind on the budget.

This was the only place I watched TV. Three soccer matches. Confederations Cup between Mexico and New Zealand. A friendly (I think) between Italy and Croatia and Denmark vs. Germany. Not sure those last two games were live. They may have been old but they were new to me.

A good night’s sleep and I will be ready to roll in the morning.