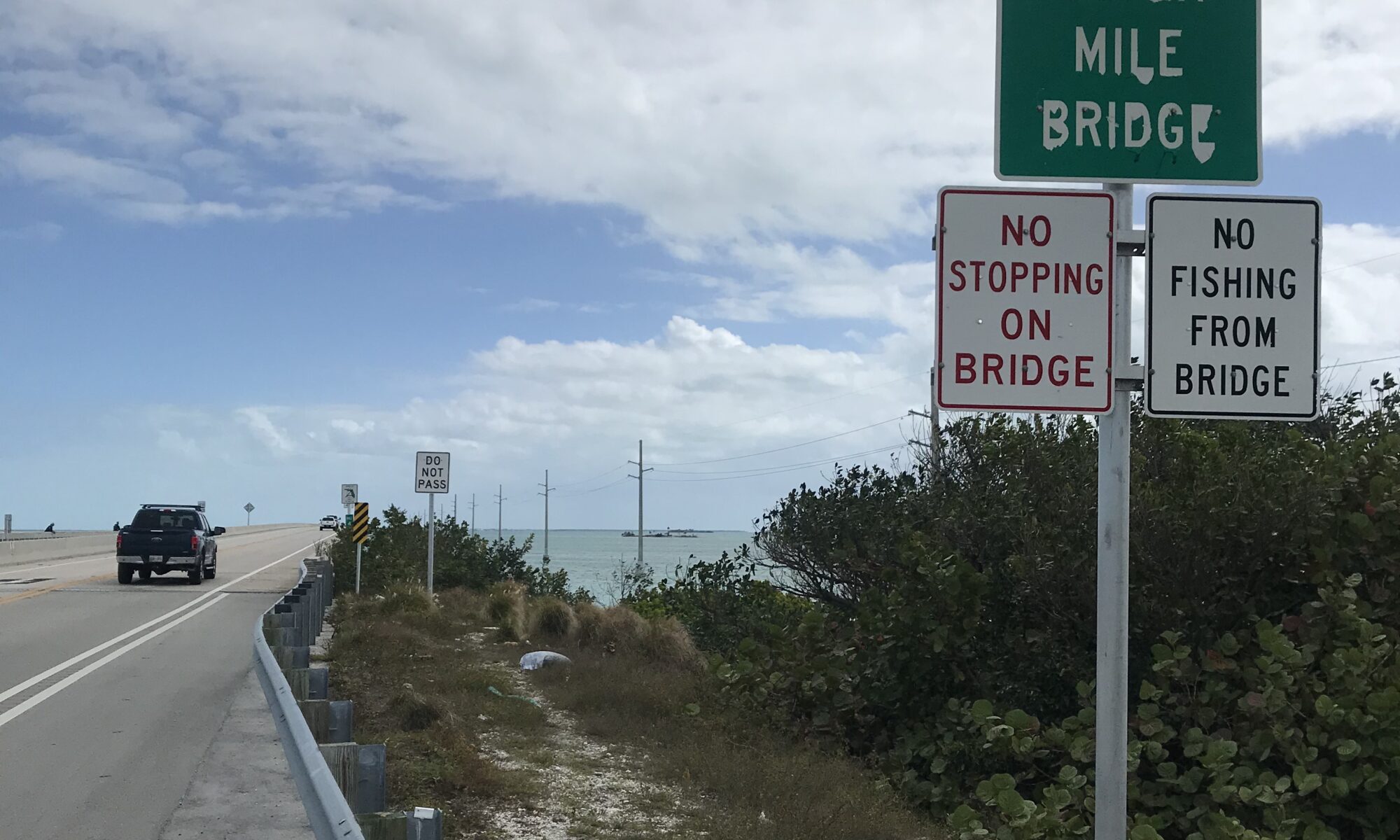 It was eight years ago that I did a ride from Key West to Marathon and back. It was windy that day and that was OK because I did the hard work the first 50 miles into a strong wind.

The accurate forecast for today was 30 mph winds from the east. My plan was to ride from Marathon to Key West and return. But I would have a great tailwind for 50 miles and then a very difficult headwind when I was tired – the last 50 miles.

I thought about first driving to Key West then riding 100 miles the same as I did eight years ago. But I stayed overnight in Homestead. I would have had to leave by 6:00 a.m. to have a decent start time. I did not check out of the hotel until 8:15 a.m.

Much of the Overseas Highway is signed at 45 mph. It would take 2.5-3 hours to drive to Key West. And that long to drive back. Add six hours for riding and I was looking at a 12-hour day. That was too long. If I was to do this I would want to overnight in Key West.*

I settled on a Seven Mile Bridge Ride. I drove over the bridge although I could have stopped in Marathon. Around MM 31 I saw parking and decided to park there. From there I headed “north” on US 1 (which was really due east).

The winds were very strong. I needed to keep both hands on the bars to control the bike. I stopped at the bridge for a picture of the sign but decided the sign at the other end would be better.

I had gone just short of half a mile and I could feel the bridge bouncing. But it was more than that. The bike was bouncing. This was the tell-tale sign of a rear flat. I looked. It was flatting.

I pulled over, and there isn’t much room and went to remove the wheel. I pulled out my tool kit and looked for my wheel removal tool. It wasn’t in the kit. While I was pondering how I would get back to my car, I looked at the wheel and the tool was attached. I blamed my mechanic for putting it there but it may have been put there by me when I last changed a flat on the road.

Ready to inflate the wheel, the unwrapped the CO2 cartridge and the inflator tool. As I was screwing in the cartridge I saw air (vapor) spewing from a seam in the side of the tool. I quickly attached the inflator and emptied the contents into the tube. It wasn’t enough. The tire was very soft.

When there was a break in the 55-mph traffic on the bridge I ran across the highway and there pondered my options. There was nowhere for someone to pull over to help if I could flag someone down. I figured I had a half-mile to go to get off the bridge and then reconsider. I decided to see if I could ride it or how far I could ride until I ruined the tire completely.

I stood, putting all my weight on the front wheel. I made it off the bridge and saw the Sunshine Key and RV Resort. It looked beautiful and on the other side of the security fence I could see couples riding their bikes. My best option would be to ask one of them to borrow a pump. Someone would have one.

I rolled up to the security gate. I explained my plight and the guard was unyielding. He told me rules are rules. I asked if he liked soccer and he did. I told him the story of the Marine Colonel who didn’t understand bending the rules. And my sage advice was if he followed the rule book 100% of the time he would always make the right call – but sometimes not the best call. The guard just looked at me. He had made the right call – he would not let me in to borrow a pump.

Next door at the gas station I asked if they had a pump. They did not. I looked at the five cars at the pump to see evidence of bikes – surely they would have pumps. I saw no bikes. So I decided to ride as far as I could and then hitchhike.

I stood on the pedals and took off. Like on the bridge, I kept my weight forward, never once sitting on the saddle. In all it was 6.5 miles back to the car. And I made it.

At my car, I got out my floor pump and looked at the gauge. Less than 10 psi. Flat. I pumped it to 80 psi and then did another half-mile. It was windy. I had a long ride ahead of me. I called it a day.

___
*If there is a next time, I should consider a shuttle service. Park in Marathon or Key Largo and ride to Key West one-way with a prevailing tailwind. Then shuttle back. Keys Shuttle and Florida Keys Shuttle are two of the services that I need to check out.