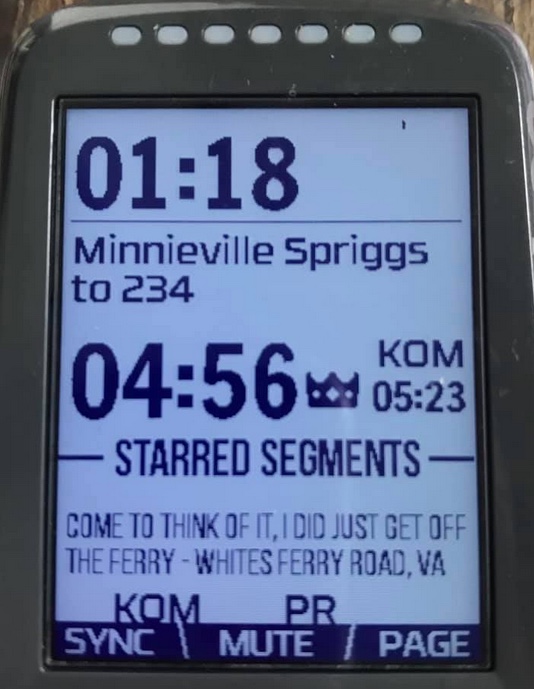 I’m old. I have more bad days than good days. Generally, I am not going to compete for a KOM (King of Mountain) segment on Strava.

My “Montclair Loop” often includes a two-mile segment on Minnieville Road from Spriggs Road to Rte 234 (Dumfries Road). The road itself is a four-lane divided road, curb to curb, no shoulders. It is signed for 45 mph. Beside the road is a bike / multi-purpose path.

There are two problems with this as a segment. First, at 1/4 mile in there is a traffic light at the Howison soccer fields. One must hit this light green. Many times I started well but then hit the light at which time I simply soft-pedal the rest of the segment.

The second is the bike path. There are seven transition segments from bike path to street as it crosses. Not all are in a straight line. One must be careful to find the transition pad. In addition, there are walkers and the occasional dog. It is hard to ride fast on the bike path, and one may suggest, that we shouldn’t with this mix.

Sometimes I take the bike path all the way. But I realized I need to take the road for the best time.

On August 15 I broke 6:00 coming in at 5:52. I was in the top ten. Four of us were tied for 8th. Maybe I was still 11th. The ride was almost perfect. I took Minnieville Road for the first mile then switched to the bike path as there is a climb on Minnieville Road. There are also those transition segments. And walkers. And dogs.

I was happy. I held the age group #1 and knew I wasn’t going to improve by much.

I was disappointed because I thought I was 2-3 seconds ahead of my previous pace. Actually I was so I gave it away on Minnieville Hill. But it also made me realize that if I had the same time twice that I could probably improve on that by a few seconds.

I had been tied for 8th overall with three other riders. One second and I would have sole possession of 8th.

I set out this morning for a quick ride. We had a party to go to and I didn’t have lots of time. The past two days I rode my gravel bike so it was fun to get back on the Domane.

Conditions were perfect. Cool (about 70°). Overcast. But most importantly, it was a weekend morning with little traffic. I was first in line in the right lane at Spriggs when the light turned red. This is before the segment starts.

I started out well. The segments doesn’t begin for a couple hundred meters and then the GO! command came on my Wahoo. There is a hill going up to the traffic light and I held my lane. The light was green and I was four seconds ahead of my PR.

It was the first day of soccer season and I should have been supervising referees. A pickup truck pulled beside me and the soccer dad had some words for me as he turned into the fields before saying words to our refs. That fired me up.

I didn’t say anything to him but thought what a jerk. I picked up the pace and was “on the limit” down Minnieville. I knew a PR was in sight.

Approaching the climb I had a decision to make. Stay on Minnieville or jump off onto the bike path. I have never ridden this section on Minnieville Road since they made it four lanes. But today, traffic was light, it is a four-lane road so there is a passing lane, and I held my ground, staying the right lane. I was 30 seconds ahead of my PR time.

I kept my pace up and started thinking about how far I could move up in the rankings. My memory had the KOM at 5:05 (but I messed that up). Then I saw 40 seconds. I was looking at 5:12 or so. Just a little more.

The last I saw was 40 seconds ahead. Luckily, I had a green light approaching 234 which meant no brakes and full gas to make the turn. I turned. I looked down and there it was – KOM – 4:56.

I had taken almost one minute off my previous PR. And when I got home I see I was badly off regarding the previous KOM. It was 5:23 not 5:05 which I thought I needed. Smashed the KOM by 27 seconds. Holy Wow!

Conditions were perfect today. Weather. Traffic. And, oh, I did this before breakfast without eating and didn’t even have bottles on my bike today.