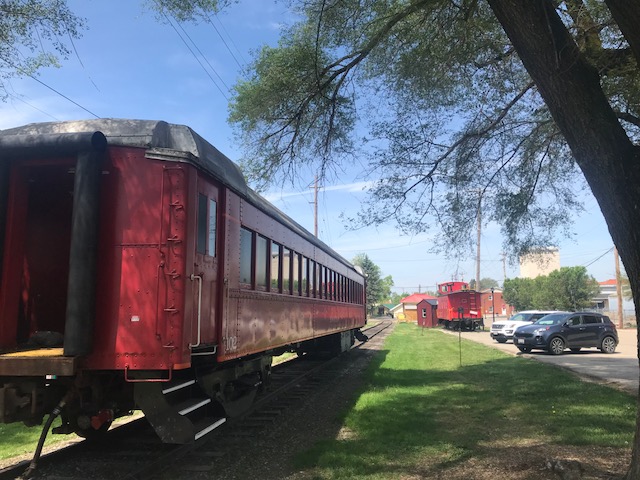 I came to Ohio to ride the Little Miami Scenic Trail and to catch up with my friend, Bob. I parked in the beautiful little town of Loveland where we would meet and ride north.

Even before 9:00 a.m., it was a balmy 79º as we rolled out of Loveland. Our destination was initially was Morrow where we would find lunch.

We had ridden less than eight miles when we came to a spur. I saw the trail with the sign towards Lebanon. Although we stayed on the LMST for another 400 meters, I raised the possibility of following that trail.

Surprisingly, we had a hill to climb. Yes, a hill. Although Ohio is generally flat, and the LMST is definitely flat, the closer you are to Cincinnati the hillier the terrain becomes.

We got over the hill but as we were descending to Lebanon, Bob had a flat. And no repair kit. I had a spare tube and we were able to repair his tire and keep going.

Lebanon is a pretty town. IMHO, almost all these Ohio towns are beautiful. The older the houses the wider the streets and the prettier the town.

We found a nice place to eat at the Cherry Street Cafe. With some outdoor seating it was the perfect place to eat, nestled in near the train museum.

We were on the other side of the hill from the LMST and with full stomachs had to ride back up over the hill from where we came. Of course, we got to enjoy a nice descent back to the spur trail then over to the Little Miami Scenic Trail.

Going back we remarked how many squirrels we saw. Shortly after that observation a squirrel darted out and just missed my wheels. Unfortunately, there was a thump as Bob hit it. Bob was lucky he did not go down. The squirrel was not so lucky.

The trail is lovely. Loveland is beautiful. I would love to come back someday and ride the entire trail.