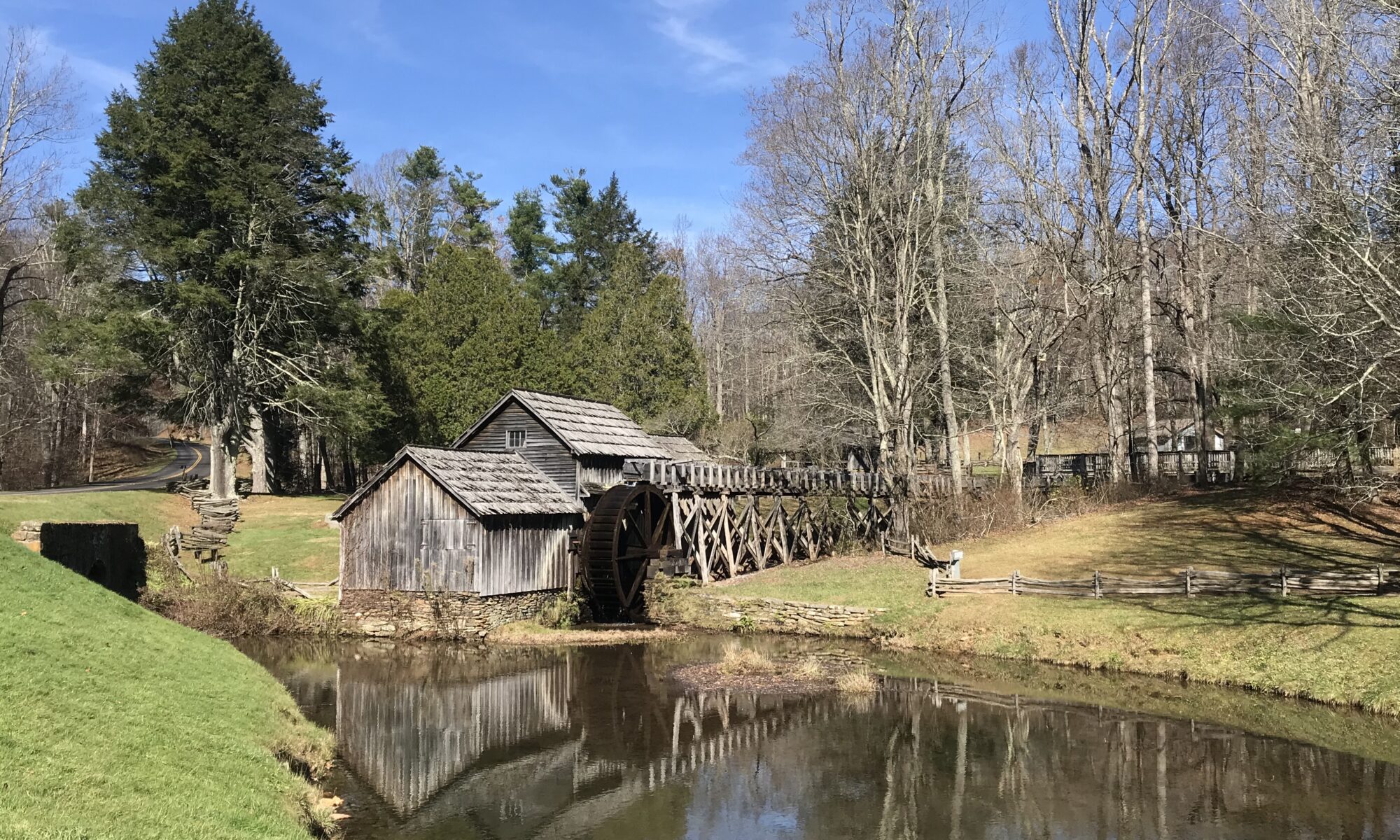 My ride was planned from Mount Airy, Riverside Park, to the famous Mabry Mill on the Blue Ridge Parkway. I found a ride on RidewithGPS by user, Adrian, and downloaded it to my Wahoo bike computer. Adrian elected to keep his profile private so I cannot publicly thank him for the suggestion.

Although I was to ride north out of town, I was close to Main Street and started out by going into downtown Mount Airy. That is by going UP into downtown. It was quite a sizeable climb although probably no more than a quarter-mile.

The downtown was only a few blocks long but was very vibrant. Not so much at 9:00 a.m. but by 1:30 p.m. it was teeming with people. It was hard to see an empty parking space. Many of the store fronts had a Mayberry theme from Floyd’s Barber Shop to Barney’s Cafe.

Although I should have headed out of town then I swung by my car to pick up some cycling food (gels) which I had forgotten to put in my pockets. And then I headed north.

It was eight miles on a two-lane road, no shoulders, to the Virginia state line. And then it was about four miles to the turn up the mountain. The course profile was not complicated. Go straight until Rte 614, Squirrel Spur Road. Then turn left and be prepared for climbing. What a great road this was.

It was six miles to Blue Ridge Parkway and three of that was on a steep portion with switchbacks. The pavement was good but there weren’t many great vistas. But at one, on a sharp curve, there was a picnic area. I really enjoyed this climb.

I came to the Blue Ridge Parkway and jumped on it. I left behind the beautiful pavement of Squirrel Spur Road and picked up a very rough chip and seal road on the parkway. It was quite rough. Not potholes, but just a rough-riding surface. Or a “heavy” road in cycling terms.

The parkway is a two-lane road, signed for 45 mph, so no traffic takes it for speed. On a chilly November morning, there were only a handful of cars that passed me in either direction.

Only yesterday in a weak attempt at “research,” I read that Mabry Mill closed for the season five days ago. Was it worth riding to it if it wasn’t open? I decided it was. I could still get a photo op and would not take advantage of the amenities like a gift shop.

After a brief stop, I would have normally just retraced my route since this wasn’t a loop ride but an out-and-back (or an up-and-down). But in the tiny hamlet of Meadows of Dan I followed the Wahoo and took the Squirrel Spur Road which is parallel to the parkway. I was greeted with beautiful pavement instead of the rough chip and seal on the parkway. I was also greeted with screaming downhills and leg-killing uphills. The parkway would have been easier, much easier, but in tourist season this alternative makes sense. Today, I wish I would have stayed on the parkway.

The descent down Squirrel Spur Road through the switchbacks was great. But I was facing a pretty strong headwind. I was also running on empty. The climb up Mount Mitchell yesterday left me a little tired. And while I remembered to stop at the car in Mount Airy for food, I forgot my Skratch drink mix for my water bottle and was only drinking water.

Uncharacteristically, I changed Wahoo to display miles to go on the computer. And I was counting them down. When I reached zero I decided I would go to Barney’s Cafe for a quick bite before my long drive home. It would have so much easier to go through a drive-through anywhere and get food to eat in the car. But I was in Mayberry and that deserved to sample the local cuisine and atmosphere.

It was a good ride. But with yesterday’s effort, I was tired.