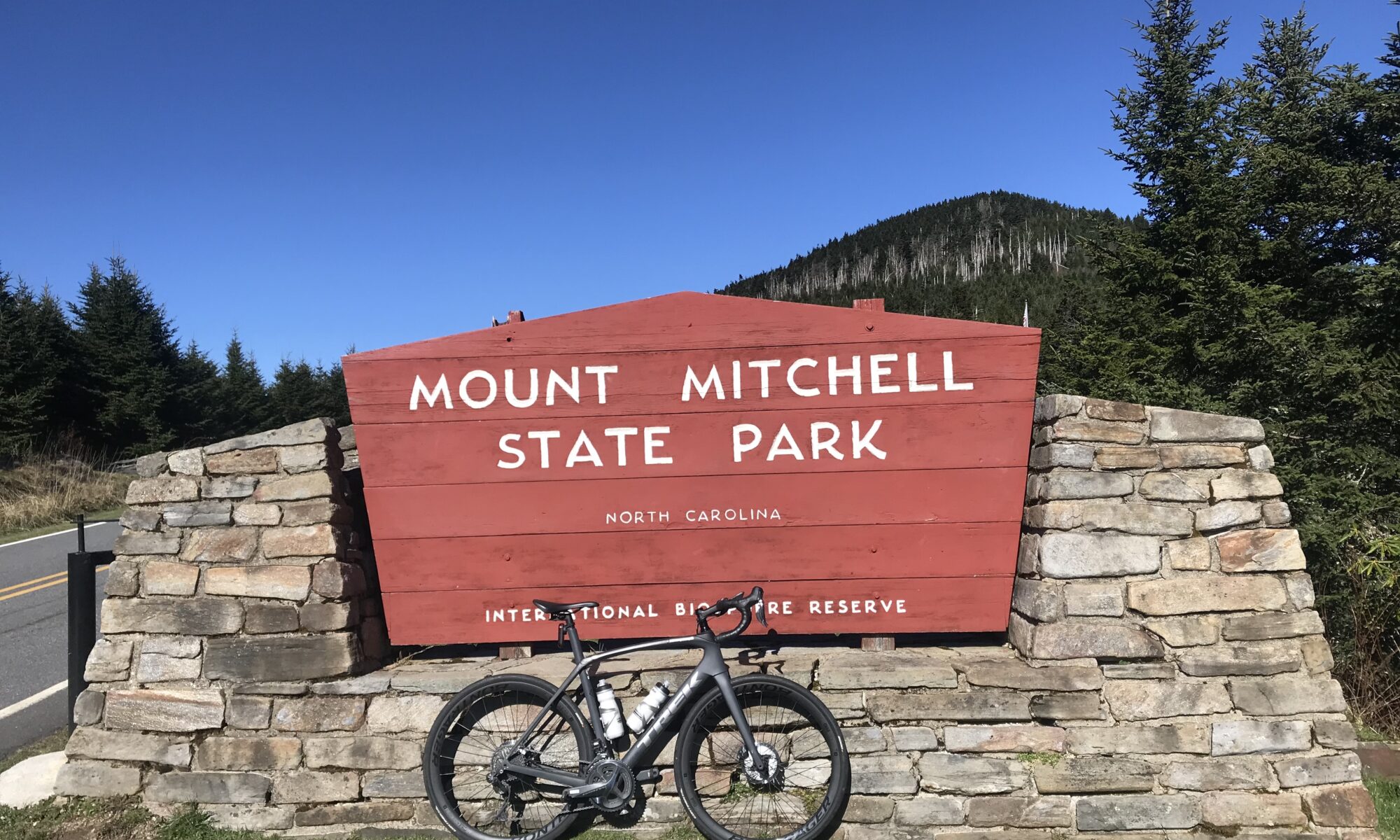 Our friends from Colorado scoff at the tiny mountains in the east. With 58 mountain peaks over 14,000 feet (4,267 m), they certainly have that right. But it’s not all elevation. Some if it’s elevation gain.

Mount Washington, New Hampshire is the highest peak in the northeast U.S. at 6,289 feet. Most of the elevation gain on that mountain is on the 7.5-mile auto road giving it an average grade of 12%. Beast!

Mount Mitchell was a bucket list climb for me. Consistently listed as one of the best or hardest in the U.S., I never made it a destination. With 2020 being the year of the Corona Virus and all my cycling events canceled, I decided to make my own adventure.

I had hoped for a mid-October day but that did not work out. So I found myself in November driving to Statesville, North Carolina, where I spent the night then drove to Marion for the climb up the mountain. While on I-40 I crested a hill and had my first look at THOSE mountains. Ugh. It was reminiscent of seeing the White Mountains in New Hampshire and realizing I was signed up to race up Mount Washington.

But I would not be racing up Mount Mitchell. Just a ride. And the first order of the day was to find a place to park. The climb starts at the edge of Lake Tahoma but there is no parking to be found around the lake. So, generally, one must park about four miles away. There is a small area at the intersection of Routes 70 and 80 but I saw a Dollar General nearby and asked them if I could park there. And they agreed.

The first four miles were basically flat. Then I came to the dam at Lake Tahoma. This dam almost failed two years ago and all residents downstream were ordered to evacuate. But thankfully, it held. There are some beautiful homes around the lake.

At the end of the lake where the creek flows into the lake is where the climb to Mount Mitchell begins. This is on Rte 80 which is a narrow road with no shoulders. Today it was lightly traveled and all drivers were respectful.

The views were wonderful if you like a forest view. That is to say, there are no vistas to see for miles because this climb of 10 miles to the Blue Ridge Parkway is in a forest. But it sure is pretty. There is a river or creek flowing for part of it and it’s soothing to see it and to hear it. The switchbacks in the last mile are absolutely delicious.

I was thinking “this isn’t so hard.” Then again, I never tried to go fast, and if I saw something of interest I stopped and took a photo. I reached the Blue Ridge Parkway and stopped long enough to remove my leg warmers. It was a cool day and I had unzipped my vest and was sweating.

The road kept climbing. I went through three small tunnels. I hadn’t studied the course enough to know where but I knew there was a one-half mile descent and a two-mile descent on the route.

The road to Mount Mitchell State Park is a four-mile climb off the Blue Ridge Parkway. It seemed to be harder than the rest of the climb and it was. I wasn’t sure if it was because I was getting tired or if it was steeper. And it was the latter. Maybe the former too.

It was a beautiful sunny day but I also some ice in areas normally shaded from the Fall sun. And as I was climbing the smell of Balsam and I thought sorry for those who drove and missed out on the smells.

When I reached the summit I saw just a few cars in the parking lot. I had been here before – in 1963 – and knew the photo showed my siblings and me in front of a tower at the summit. And it wasn’t here. I circled the lot and saw a trail or walkway to the actual summit.

It looked like a stone walk but was probably pressed concrete. I expected to see a NO BIKES sign but did not. Maybe I didn’t look hard enough. And in-season, no sane cyclist would ride on this path crowded with tourists. But I saw no one.

So I started up the path. And it was steep. My guess was 15-18%. Halfway up were some benches and a brief flat section. I looked up and the path kept going. And so did I. I turned the corner and saw the sign. I had made it. And there were seven people at the summit – four by the sign and three walking up the observation deck. And they all starting cheering me. “You made it!”

I probably shouldn’t have ridden my bike up there. Sorry. But I don’t think I could have walked up in cycling shoes and I needed to get there. I’m thankful I went on a November day after all.