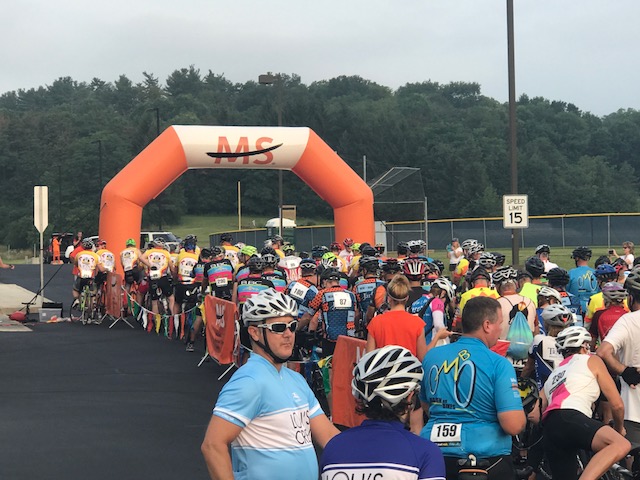 I arrived for check-in for the MS-150 ride. I did not see then had to ask for a bib to make “I RIDE FOR…” I was told they sent their supplies to another event which did not return any. I was disappointed. I was delayed. Two groups, supposedly of 100 riders each already left and it looked like ours was the last group.

I had been thinking about going over Locke Mountain instead of going to Roaring Spring with the group. Has I been in the front group, or second group, I may have rethought this. But I figured starting last or next to last, I would have to chase to catch the earlier groups to ride in a pace line. And since the pace lines would have already formed, I would be trying to bridge up to the pace lines.

Still, I didn’t make the decision until I was on the road. I caught the tail end of the third group then, when it was safe, started to make my way through them. I had three decision points where I could make the move.

Coming off Frankstown Road was Locke Mountain Road. But there was construction and I wasn’t sure I could get there. Plus there were volunteers manning the intersection. I was past Tel Power Road before I even realized it. On Reservoir Road I continued to work through riders and may have caught some from the second group. As I signaled (bell) I was coming by I passed a guy and his wife. After I passed them I head him say “Wow!,” in apparent reference to my speed. I was doing 18 mph which isn’t exactly fast. That probably cemented my decision. I really didn’t feel like hearing comments from riders as I passed them (although that may have been a compliment).

I came to Loop Road, didn’t see any volunteers, and had gapped any riders behind me. I put out my left arm then turned on Loop Road. I didn’t want any volunteers to see me for fear they may chase me to tell me I was going the wrong way.

The pavement on Loop Road was new asphalt. It was sweet riding. Apparently I was on a bike route – it appeared to have a clock tower although I haven’t figured out what it is or where it goes.

I came to Locke Mountain Road. It was all uphill from there. Most of the lower section, and indeed, most of the climb, showed 14-15% on my GPS. That may have been overstated though – it only felt like 12-13%. There were gnats around my eyes and I continually had to use a free hand to swat at them. Very annoying.

I worked hard. I was soaked in sweat. On the descent I really couldn’t see clearly. Still I had a top speed of 45 mph.

I followed some back roads to Williamsburg. I did not want to be the first rider at the second rest stop. I know there were some people hammering the course and I had cut 13 miles from it. Although I started much later than they did and had to get my fat butt over Locke Mountain I still felt it would be close.

As I came to the end of Shortcut Road I saw a group of six go by. And they were apparently the first. I rolled in and spent a lot of time at Rest 2, mainly because I popped a lens out of my glasses trying to clean them.

I saw some riders from the Blair Bicycle Club roll in and reintroduced myself to Leslie, a woman I rode 100 miles with in October last year at the Sea Gull Century. They rolled out and I wasn’t too far behind them.

In addition to Leslie, I rode next to Aurora, another rider I rode with last year, although I did not recall her name (until referring to the entry from last year). I integrated with their group of five until we came to the first of the uphills. I pulled through with the intention of pulling but instead rode them of my wheel.

On US 22 I soft pedaled some, waiting from them to come back but they never did. I caught Pat, another BBC rider, on the run in to Spruce Creek. He too, was part of our century group from last year, although I forgot. We talked for a little bit but as the road went down I took off (serious descending advantage – see “fat butt,” above).

In Spruce Creek I deviated onto a side road for photos then when I came back I caught the Leslie group. Once again I rode with them until we came to a chip and tar road and they slowed down seriously. Lunch was at the beautiful Camp Kanesatake. I sat down on the bench and left a giant wet mark. I checked where others were sitting and didn’t see any wet marks. I won the sweating contest.

The BBC group left and I found myself catching two Old Men On Bikes from Allentown. I really never integrated with them except I did without trying. We caught the BBC group and rode together. About four miles from the next rest I went to the front and pulled. At the rest, two of the five riders went on and three stopped. They left about two minutes ahead of me, never offering for me to join them. Funny how these things work. I never really was part of their group. I soloed onto State College, never catching or being caught by anyone. Instead of heading to the finish I went onto campus and stopped at the famous Berkey Creamery. I didn’t see a safe place to leave the bike (it is a college campus) so I decided to move one. After all, it’s just ice cream.

Throughout the day we watched the weather. The forecast was for thunderstorms and once it got dark. But I beat the rain by more than an hour. After I showered I looked out my window and saw riders finishing over the next 2-3 hours. In the rain. I had a good ride.