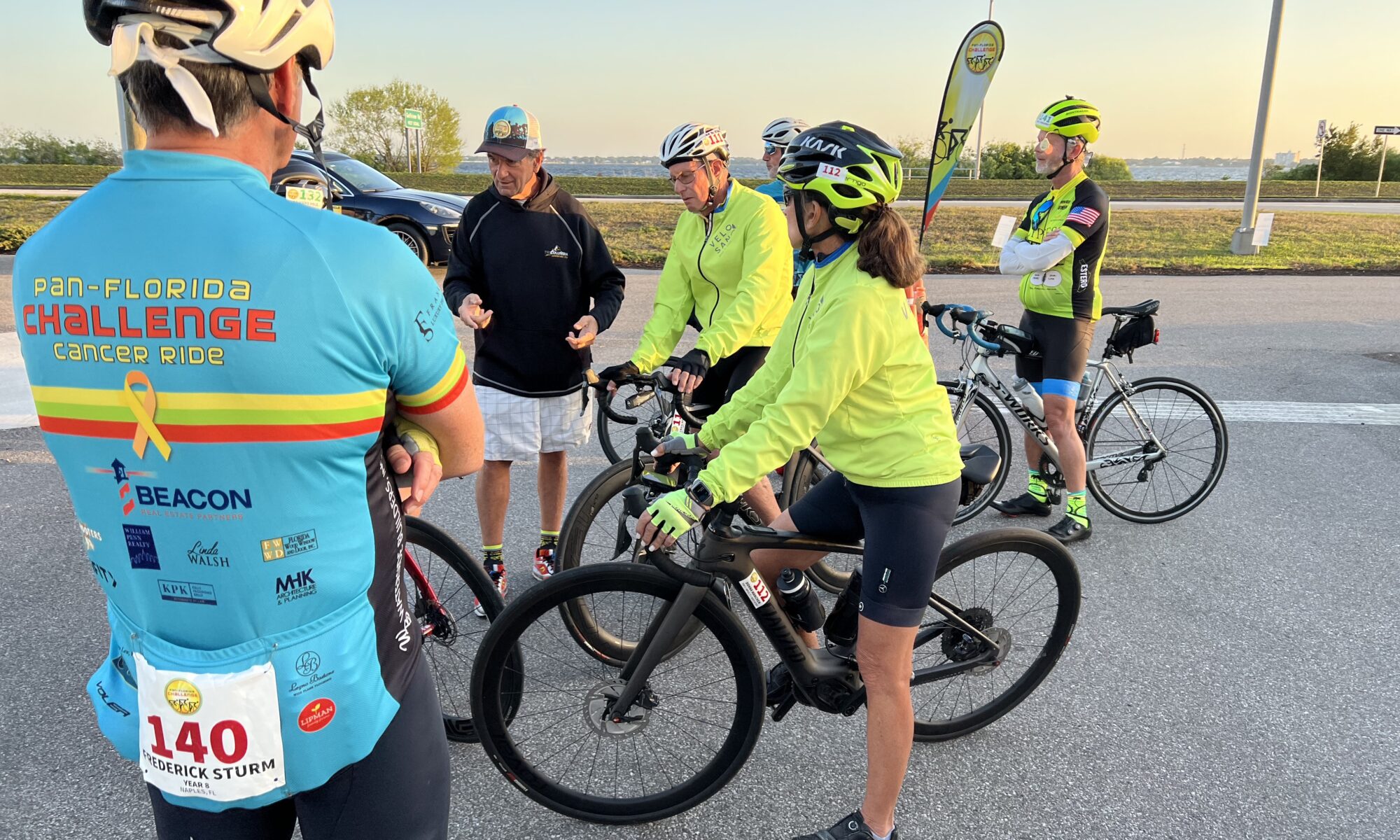 About to board a party bus for the 2.5 hour trip from Tampa to Fort Myers. There are six of us on the bus. The others, there were about 35 riders today, got rides from somewhere.

This was Day 2 of a 200-mile charity bike ride. It has been 10 years since I last rode a double century – at RAGBRAI. With no rides longer than 15-20 miles most of the winter, would I even be able to do one century?

Yesterday went well and today went even better. The 100-mile second day was really 106 miles. But at no point were my legs ever hurting me or my energy level low.

The ride started when the A riders left the start line. About a minute later the B riders would go. I had looked at the group of four guys and thought I was in the right group (C). Yet I rode with those guys yesterday until I dropped them so maybe I should be with them. But I let them go.

Another minute or so and then the C group pulled out. There seemed to be 12 of us and I immediately went to the front. The others lined up behind me and I carefully pegged my speed at 16 mph. Our riding speed was supposed to be 15-17 mph and by my calculation, 16 mph was in that range.

“Too fast! You’re going too fast!,” I heard a voice, or maybe two, from within the group. This was not going well. I slowed to 15 then after five minutes decided to give others a chance. I moved to the back and sat behind Mark.

We were going 14 mph. I was not happy. I was also concerned about being in the sun too long today and needed to go faster. I could see about one mile ahead and could barely see some blinking red flashers on the four bikes of the B group.

It was more instinct than thought but I pulled beside Mark and told him that I was going to bridge up to the B group. I’m not sure what Mark may have thought but I only shared my plan with him. What’s the worse that could happen? Try and fail. But at least I had to try.

The line was stretched out on the shoulder or in a bike lane. I was 12th wheel when I took off. When I passed the front rider I was going 24 mph and still increasing my speed. I soon settled in and looked for landmarks up the road. The first was a pole and it took me more than 3:00 from the time I saw the group pass it until I got there. Then it was 2:15. And followed by 1:45 and 0:55.

When I got to 0:30 I caught a support vehicle. The driver asked if I was trying to catch the group and I replied that I was. He then asked me if he should go tell them to slow down. LOL. “No,” I replied. “I will catch them.”

If my numbers are right I had chased them for more than 16 minutes (lap counter on Wahoo). I chased for 5.3 miles. That was probably the most or second-most enjoyable segment on this two-day ride. There’s something very satisfying about doing a chase and being successful.

In retrospect, I probably should have gone right by then to the front of their group. Then I would have had five surprised faces instead of one. But I pulled in behind John who was surprised to see a shadow next to his. It was early morning and going north, we had nice long shadows to our left.

But there were five instead of four that I saw leave the start line. Then a woman peeled off the front. It was Laura who I had ridden with yesterday. She greeted me loudly as I did her.

The winds were strong. Almost exclusively headwinds as we were headed north. At Mile 50 we came to a rest stop and two riders dropped out. One said it wasn’t fun riding in the wind. We were down to a group of four.

However, we also entered more rural roads and we had a support driver who was willing to let us draft off him. I was always willing to hug a bumper but didn’t want to hog a bumper. And we encouraged our weakest link, a rider whom we were always dropping. Once he got the hang of drafting at 15 mph the driver sped up to 17 mph and our rider quit. “I can’t ride at 17 (mph),” he said. This was in the B group – 18-20 mph. The C group, in which I started was 15-17 and we had a rider who couldn’t ride at 17. The more I thought about this the more I thought I was right about my riding speed. It’s just that everybody else was way off.

At a lull on a backcountry road, I worked on getting our group to do a rotating pace line. After 3-4 minutes one of our riders said “good luck with your chain gang” and quit cooperating. That was very unusual. After the ride, he said to me, “well this wasn’t my first rodeo.” I guess he was too good to cooperate with us. Oh well.

I asked Christopher why he was on a cancer ride. He told me he lost his mother, Theresa, 60, to brain cancer one year ago this weekend. I asked him what he thought about our two riders quitting. He told me that he was riding in honor of his mother and he was going to finish the ride no matter what.

I shared the same conviction. I was riding for every name on those stem caps I had. As soon as I put a new name on the bike I was riding. There was no way I would jump in a car.

Chris also told me he is a plastic surgeon in Miami and his wife is a surgeon living in Minneapolis. I think she is finishing her residency and they will live in Miami. But she flew down to visit him this weekend and he took off on a two-day cancer ride. This is what love looks like.

I never felt any energy depletion. I wanted to ride. At the last rest stop, I put on the name Jacob. And I knew that “Jake the Hero” would get me home. I would be riding for him but also with him.

We picked up some stragglers and Chris and I went to the front the last five miles. I heard people calling out to go slow so we would all finish together. Okay, I could do that. It didn’t mean anything to me if I was in a group or a group of one.

We finished in a small park. My luggage was there so I changed into casual clothes and out of my riding kit. They had dinner in a picnic shelter catered by Mission BBQ. This was my kind of dinner.

We were to board at 5:00 p.m. but are waiting on one person to finish. We had been told yesterday that anyone out on course at 4:00 p.m. would be SAGged in but I guess that didn’t happen. And I’m okay with that.

Then she finishes. She appears to be one of the oldest participants. What an effort she gave to finish. I don’t mind being delayed so she could complete her ride. What a contrast to the two in our group who just quit at Mile 50.

What a ride. Two Hundred (206) miles fighting cancer. With no real winter training. I like this!