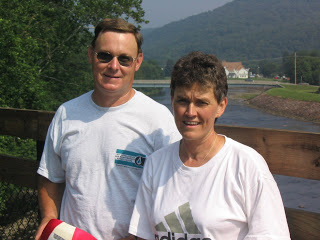 There’s a saying that the Tour de France is not won during the day but at night. The point is how well one can sleep and recover after 100-150 miles of racing. I would have lost the Tour.

Sleeping was very difficult. It seemed that every muscle in my body ached and I already developed saddle sores. This is something a rider who is fit would not have to worry about. I simply did not prepare for such an endeavor and I was paying for it.

I began the day with a breakfast at my parents then loaded my Camelbak correctly this time. I left my dress clothes and figured to pick those up later. I filled the bladder with as much ice as I could then poured in the water. It holds 100 oz. of water.

My dad said to me “You’re riding your bike home? I can drive you home.” He didn’t understand the journey; my goal of riding from Pittsburgh to D.C. “Do you want me to drive you to Frostburg or Cumberland?,” he asked. I told him that I wanted to go back to where I left off at Ohiopyle.

My route on this day would take me to Meyersdale where the trail would end. There was a 30 mile gap between Meyersdale and Cumberland that was uncompleted. I had studied the overland route but wasn’t feeling certain, especially since I messed up something so simple as getting out of Pittsburgh yesterday.

We drove over the hills to Confluence on our way to Ohiopyle. It was very foggy and a little cool. I thought it was a perfect day for riding and hoped the fog would stay on the hills for much of the morning.

We reached Ohiopyle and I began to unload my bike. There was a couple who had just unloaded their bikes and the man said to my dad “hey, I know you.” Just two and a half weeks earlier we had attended the “States” Family reunion near Punxsutawney, Pa. This was my second cousin Alyson Reitz (nee Spicher) and her husband. They had driven down from the Punxsutawney area for the day and wanted to ride the Ohiopyle area. They were contemplating riding “down” to Connellsville and back or “up” to Confluence and back. I told them to definitely ride up to Confluence (with me) because the second part of their trip would be downhil. So for the first 12 miles of my second day I had some company. Ken and Alyson Reitz
Alyson is the author’s second cousin

Riding with someone is so much easier than riding alone. Although they told me to ride ahead so I didn’t slow them down I wasn’t about to. First of all, I needed their company to keep going. Second, while I was riding back to Washington, D.C., riders mistakingly thought I was in a hurry and would want to ride faster than their pace. They forget, they may be in a sprint while I am in a marathon.

We rode together. When we reached Confluence, which is at the confluence of the Casselman and Youghiogheny Rivers and Laurel Run, we parted company and I continued on to Markleton and crossed the high and low trestles at Pinkerton.

From here it was a matter of just keeping my speed up as best I could. I had ridden this stretch twice before so there wasn’t a lot new to see. When I rode it before it was Meyersdale to Ohiopyle so I usually averaged 14-15 mph since it was slightly downhill. Even downhill on the Allegheny Highlands Trail one has to pedal to keep up speed. This is not an asphalt trail but consists of crushed limestone. But now I was going uphill so I needed to work even harder. I should have made much faster speed. The 42 miles from Ohiopyle to Meyersdale should have rolled away in three hours or so but it was more like four. I was tired but also relieved, in part, when I came to Meyersdale. I stopped to admire and photograph the Salisbury Trestle.

Crossing the valley 100 feet bleow is enjoyable not only in the view but also because the deck is concrete and I was finally off the limestone trail, never to see it again on this trip. I really enjoyed riding across the 1900 foot long trestle. At the Meyersdale end one has to navigate the vehicle barricades that allow only bikes to get through. Here I didn’t do so well. At first I thought I could stay clipped in and zig zag ride through the posts but then realized I had to stop. Quickly.

I hadn’t unclipped from the pedals and that always spells disaster. The bike stopped. The feet were stuck to the pedals. When that happens, the rider falls and this rider did but it was a soft fall. The gloves protected the hands and the bike, thankfully, was okay. It was stupid and was one of those things that happens when the body and mind gets tired.

At the Salisbury Trestle the improved trail ended although one can continue riding for another mile or so to the old Western Maryland train station. But here the trail is just an old road bed and is very rough. I was riding a Trek Navigator which is a hybrid, neither road bike nor true mountain bike. But it has fatter tires like a mountain bike and lacks the high gears of the road bikes so it is much closer to a mountain bike. When I reached the station I turned down the street and rode it downhill until I came to a Subway sandwich shop. I had driven through Meyersdale one month earlier and scouted this location for food.

Here I was able to wash up my hands and face and ordered a 6 inch sandwich. I drank some soda but before leaving filled my Camelbak with ice and topped it off with water again. I had depleted the 100 oz that I started with. I had ridden almost 45 miles uphill from Confluence and the big mountain climb was ahead.

The thought of climbing the mountain was not a pleasant one. The unimproved trail may have continued another five miles past Meyersdale but no one seemed to know for sure. Least of all was the girl at Subway. I had calculated the distance to Frostburg as 18 miles. When I told her that I was headed to Frostburg on a bike, she couldn’t believe it. I asked her how far away it was, not entirely trusting my memory. She said, “in a car traveling 60 mph, probably one hour.” I said oh no, that would be 60 miles and I know better than that.

Really Off the Beaten Path

I wasn’t sure how to leave Meyersdale. I could climb the hill in town back up to the WM Station and try to head out the unimproved road which was to be the new rail trail. But I didn’t want to head out on an unimproved rail bed for a couple of miles only to find a gated or closed trestle. So I headed out on the road which I knew would cross the mountain. I started down in the valley and in a couple of miles passed under the trestle which would be the next to open on this trail. It looked finished but may not have yet been open.

The stretch from Meyersdale to Cumberland was the “missing link” in a completed trail from Pittsburgh to D.C., if you ignore the 20 miles coming out of Pittsburgh. A couple of trestles remained to be finished and most importantly, the Big Savage mountain tunnel was yet to open. But in August 2003 there was one way over the mountain. Back country roads up and over the mountain.

I started the climb. I had yet to use my granny gear and part of me said to save it for when you really need it. But I decided that climbing Savage Mountain qualified and I dropped down into granny gear. Well, I didn’t. I had a lot of clanking and grinding but my front sprocket would not drop down into first. I decided to stop and manually move the chain which worked. The climb was steep in places but also offered a brief downhill or two. They weren’t for long and while it was nice to coast and catch my breath every downhill also meant that I had to climb that much again.

I was taking on fluids as much as I could and did not cramp up. In fact, in Confluence I took on two bananas which I would do every day. One to begin the day and one as a snack. At one time I was thinking if it was 18 miles to Frostburg and if I had to walk it, at 2 mph, it would be nine hours so I would still make it by midnight. The mind plays tricks when the body is so tired. My dad had said to call if I wanted to spend another night with them. For all the hard riding I had done today, Meyersdale and even Cumberland still weren’t that far from my parents in Somerset.

Had I been able to get a cell signal I would have ended the day. I was in a lot of pain. But I had to keep going as there was no signal out here in the mountain wilderness.

I kept my pace, keeping it going at a steady 3 mph. I started thinking six hours or 9:00 p.m. But as the grade lessoned I was able to start thinking more rationally. I had another 24 oz Gatorade on my bike and decided that the Gatorade would be my champagne when I reached the Mason-Dixon Line (otherwise known as the Pennsylvania-Maryland border).

There was very little traffic but when one car with Maryland plate passed me I was able to sit a little higher and work a little harder. I knew I was close to leaving Pennsylvania. I came to the top of the road, but not the mountain, but was almost there. For the first time I could see towers on the mountain over near Interstate 68 in Maryland. It was about 4:30 p.m. and I called my dad and told him I was out of Meyersdale. (He wanted me to call him at Meyersdale but there was no cell signal there.) I saw the sign that said “Frostburg 7” (miles) and knew that it wouldn’t be midnight. I rode another mile then reached the Maryland border and drank my Gatorade. I still had work to do. I climbed higher though Finzel then reached U.S. Rte 40. Here I began a fast descend down a hill in preparation for climbing the summit of Savage Mountain. I kept working to get up the mountain and then stopped at the top to look around.

I was 100 feet above I-68 watching trucks struggle to climb this hill. I crossed the summit at 5:30 p.m. and descended quickly into Frostburg not worrying that I was doing 39 mph in a 25 mile zone. Descending down the mountain I didn’t brake nor did I pedal. I simply coasted and enjoyed the couple minutes of satisfying ride that came after 12 hours of hard riding from Pittsburgh. The day was almost over but would you believe that one must make a final climb to get into Frostburg? I rode through Frostburg and descended down the mountain on US 40. The temperature on top of the mountain was 86 degrees so it had been a warm day for riding. When I came to Lavale, Md., I decided to call it a day at the Comfort Inn. But the night was not so comfortable.