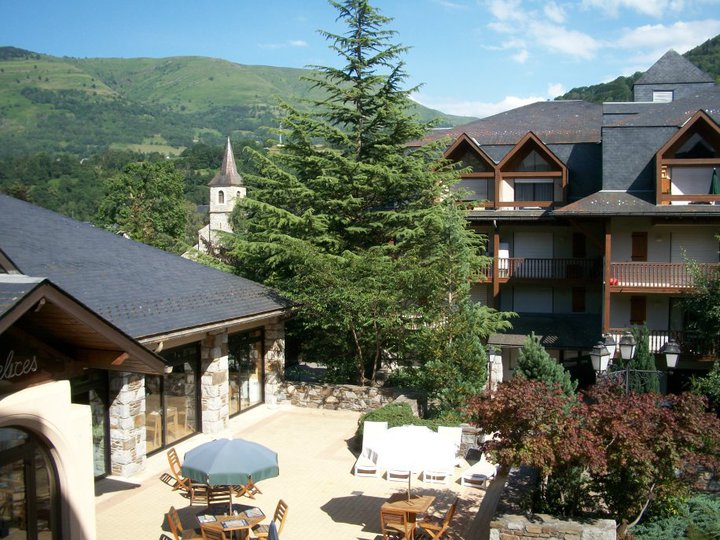 Then I met Ed and Nancy Karrels. Nancy was studying museum science and told me about a person she wanted to meet, Nina Simon. I told her I was good friends with Nina. (True). It’s truly a small world – even on our bus.

We drove out to the Pyrenees in the motorcoach. We had a great picnic lunch in a park/square/open green area with lots of dog poop around in the village of Arreau. We got fitted to the bikes followed by a too-brief intro of the group. I could never remember all the names. I hadn’t read up on the climb and thought I was near the summit (I wasn’t looking up — that’s an old climber trick) when I saw the sign to the summit — 7km (4 miles) to go. Average grade 9%. Well. it was in French but I knew what it said – “you’re going to die.”*

That was enough to make you want to stop and drink the mountain water coming out of the side of the hills (it’s OK unless it’s marked NON). But I kept going and dragged my butt up the hill.

After 30-45 minutes on the summit, we got to ride down the mountain. I gained a great appreciation for the professional cyclists. I always admired how fast they could climb but going down these roads — wow! — they descend almost twice as fast as me. The ride down was scary. Very technical (lots of hairpins curves that one had to slow down for) and very dangerous. My average speed down was only 20 mph. That was a lot of slowing in sharp curves.

After a shower we went to La Grange, a pretty neat restaurant which took the rest of the evening. And it was non-smoking although I wonder if it was that way just for us. Doesn’t matter. Thank you France!

Actually, I would discover later that all of France is non-smoking in restaurants. However, many restaurants have expansive open areas in the front, sidewalk cafes, and the smoke will find its way back in the restaurant.

Tomorrow: Col d’Aspin (twice) and the Col du Tourmalet. Our private viewing will be in LaMongie, a ski village just before the summit of the Tourmalet. Trek Travel has a private restaurant reserved and may be out on the roof (so I’ve been told) to see them come by. And to yell bad things at Alberto Contador.