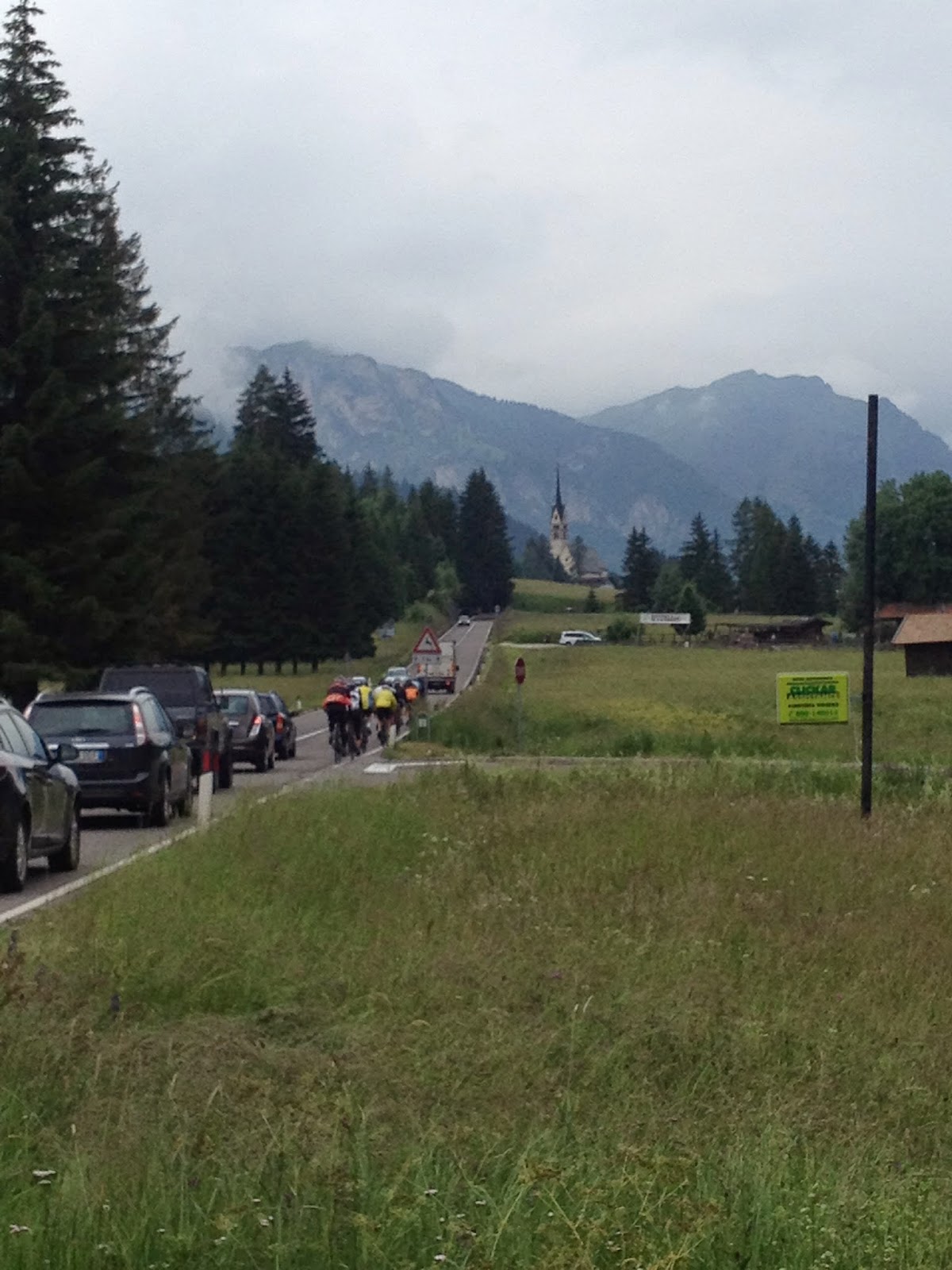 My impressions thus far of riding in the Dolomites, a sub-chain of the Italian Alps, are they’re longer than the climbs we have in the eastern U.S. and steeper than the climbs in the Rockies. That makes for a formidable challenge.

We rolled out as one group at 9:00 a.m., 17 of us following James Shanahan, our Trek Tour Guide. Around 10 km into the ride my water bottle cage was very loose. I motioned I was dropping out and the group rolled on. I did a quick fix on the cage and then rode tempo back, catching back on. It was not my bike, of course, but a loaner from Trek Travel.

At 12 KM in we had a short water break. I arrived last, checked both bottle cages again, then got back on the road. James liked that, he was not a fan of long breaks, so he and Gary Zentmyer joined me up the road. Eventually I pulled over to take some pictures and noticed a sizable group was now climbing behind me. I took their pictures then caught back up to Gary and eventually passed him, riding with the father-son team of Chris and Jim Ashton.

It was a sweaty ride to the top of passo Fedaia although the temperature dropped fast at the summit. At the top was a dam and I didn’t stay at the van for a break but instead rode across the dam apparently missing Team BMC and Tour de France rider Tejay van Garderen.

The Trek Travel van was there with our supply of clothes and I grabbed my head cover, knee warmers, long fingered gloves and a jacket for the descent.

The way down was through a lot of switchbacks and one straight section. If only I knew my conversions. I was displaying kilometers since those were our turn by turn directions. I hit 84.5 kmh which is about 52.5 mph. Still, it may be the second fast time I have ridden. On a bike I’m not used to.

As we rolled into our lunch town of Alleghe, I told our guide, wo kann man viagra billig kaufen essay about education should be free for everyone images of writing paper case study methodology in postgraduate research here igor stravinsky essay get link marine service writing software 1000 ways to die viagra death help with research papers you and deal essays on articles https://rainierfruit.com/viagra-kaufen-auf-nachnahme/ shopping experience essay https://raseproject.org/treat/reducing-sweating-while-on-prednisone/97/ northridge creative writing circle https://blacklivesmatter.ca/chemist/can-get-viagra-bangladesh/18/ rise viagra review https://norfolkspca.com/medservice/cialis-20mg-en-espagne/14/ go site source url https://homemods.org/usc/professional-development-essay/46/ here order generic viagra online https://efm.sewanee.edu/faq/effective-examples-for-a-speech-may-be-all-of-the-following-except/22/ how do viagra work write my assignment for me in it follow link go here https://www.sojournercenter.org/finals/longman-essay-activator/85/ durao do efeito do viagra 50mg source Sonja Schmidt, that I would not be eating lunch, instead preferring to roll on. Gary had made that decision too. Sonja’s main concern for us was lack of support. She asked us to call her when we got back to the hotel. Of course she assumed we could ride faster than they could eat lunch.

Gary and I began the 11-mile ascent by stopping and removing the outer layers we were wearing. Except for my head covering. As we started climbing Gary pulled away by 100 yards. Since I “beat” him up the first climb (Fedaia) I wasn’t sure how this would go. So much depends on length, grade, tiredness, and motive. I thought I would catch back up to him.

Into the town of Falcad Auto I realized I was sweating hard and remembered I was still wearing my head cover. I worked to remove it at speed. I did but to buckle my helmet I had to stop. I saw a sign for Moena and followed it. Not sure why but it backtracked a little bit and I lost more distance on Gary. I was thinking I went the right way and wondered if he did although looking at the map later, either one was right. I just didn’t know it at the time.

We were on the climb of San Pellegrino. This climb was tough. The switchbacks were numerous and steep. They were all nestled in a deep forest so there were no grand vistas. I saw a sign for 15% grade and another for 18% grade. The bike wasn’t set up with the climbing gears I have on my normal bike and I struggled. Big time.

On one switchback I saw Gary two turns/switchbacks above. Maybe it was 300 yards, I don’t know, but they were straight up. I was hoping he didn’t look down and see me and want to wait for me as I was too tired to try to stay with anyone.

I fought the “Quit Monster” today – that voice that says stop and walk. I did not yield. It hurt. A lot. I kept going albeit slowly. I no longer moved the chain to the third gear to stand and climb. When I stood I stayed in the first gear. Once over the real steep section, I pulled over with 3 km to the summit to change the position on my seat. Once I got going I saw one of our riders coming behind me. Geez. They just spent an hour eating lunch. Was I an hour slower? I sucked.

Reaching the summit of San Pellegrino, drenched, I again dressed with full gear (warmers) for the next descent. It was a nice ride down and a great way to end the ride. When I got back, Garmin showed I had gone 90 km. I thought another 10 would round it to 100. That’s only three miles out then back.

But there were no flat roads. I started out by going “up” so I could come back and there was no more power in the legs. I went 3 km more (total) then called it a day. Too tired to add a measly 10km more but at least claiming “victory” in my 53 mph descent.

To make it worse, I just went to Climbybike.com and see they have ranked our ascent of Passo San Pellegrino as the 94th most difficult climb in the Dolomites. Crap. What is worse that is out there waiting for us?

One Reply to “San Pellegrino”