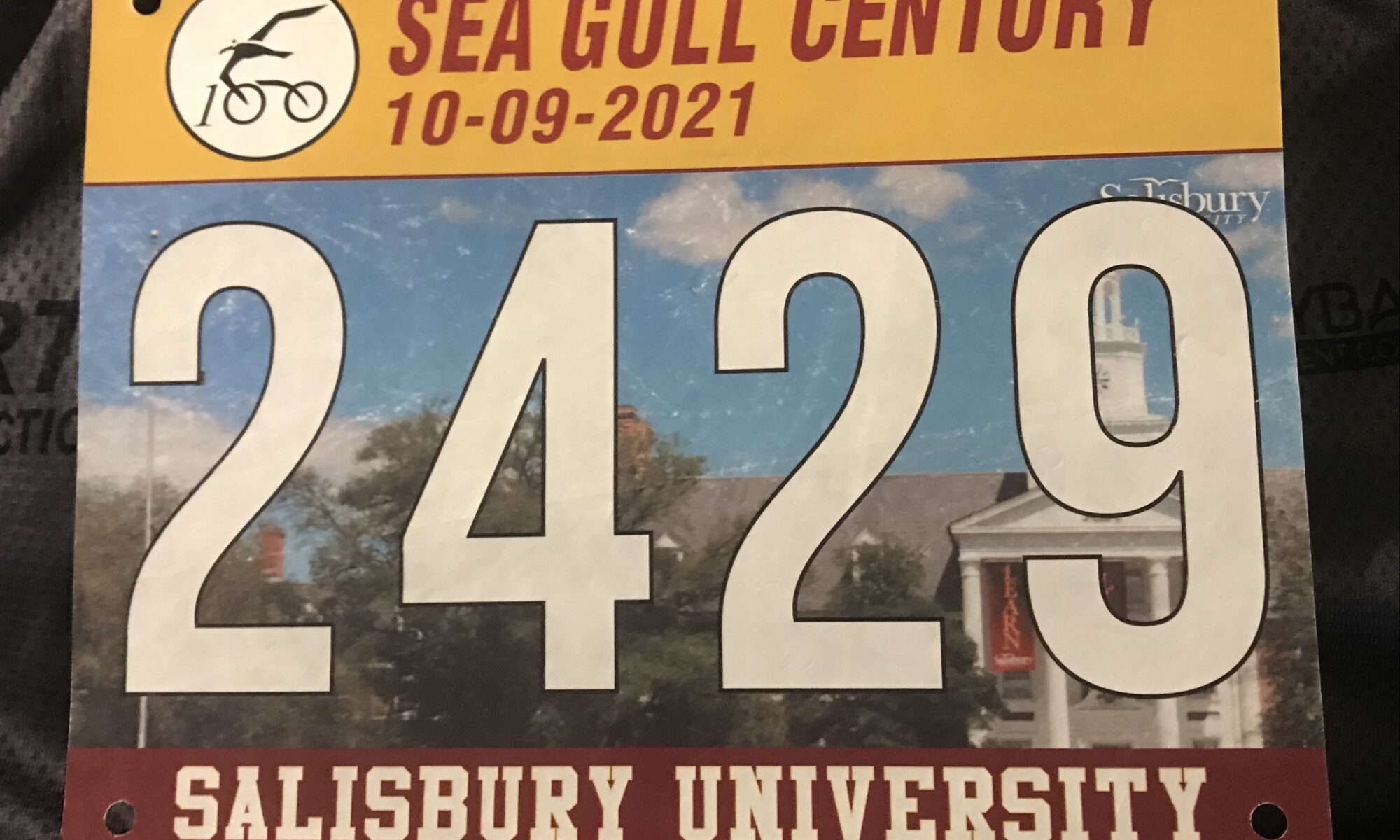 Officially this was my seventh Sea Gull Century. Officially because last year it was canceled but I rode it anyway.

Each Sea Gull brings new experiences and memories. In 2016 I met and rode with some members of the Blair Cycling Club. In 2017 I just rode solo. In 2018 I basically towed Sandra for 60 miles and she never thanked me or said goodbye. In 2019 I met Andrew and Stacey which was refreshing. Last year was unofficial and backward.

I didn’t know what 2021 would hold. Let’s start with breakfast. I stayed at Tru by Hilton in Georgetown, Delaware. Although the breakfast area was fully lit, they would not turn on the juice machine or pancake maker until 7:00 a.m. I left at 6:10 a.m.

I went through the drive-thru at McDonalds and went with the standby of hotcakes (no sausage). Actually, I was quite happy with the breakfast.

In Salisbury, I parked on the street next to the stadium. I liked this spot. Much better than a big lot or a field. It was gray and 62º. I wore arm warmers and took a rain jacket which I would not need. I was wheels-down at 7:40 a.m.

Today I wanted to be real conscious at doling at my effort. Easy in the first third is the adage. And in the first hour, my perceived effort was a two (out of 10). My heart rate seemed to never go above 115. I was riding easy.

I looked for a place for a natural break and found it behind a truck parked in the woods. When I rolled out I jumped in with a Major Taylor Cycling Club group from Columbus. These people were truly delightful. I enjoyed riding and conversing with each rider.

This ride attracts a number of Major Taylor Cycling Clubs from all over the east coast. Most (all?) are people of color and today I found my niche riding all day with Major Taylor riders.

The first rest top was in Snow Hill, Maryland. The police had a separate route for cyclists to the rest stop and it reminded me of RAGBRAI. It was so crowded you (almost) needed to dismount and walk your bike.

I had integrated with a group before the second rest stop. While almost everyone went to the rest stop I continued straight. I caught onto a new group. This one was a little awkward. I was looking a Strava Live Segments and knew I could set a PR on a two-mile segment if I could pass this large group. It was a large group and since we were on a country road with good visibility of oncoming, the group was spread across the entire road.

I had to fight my way through the group to the front. I heard someone say “he is really moving.” I take that as a compliment. I was also going into a brutal headwind. I got the PR, went about one mile further then pulled over and removed my arm warmers. This was strategically done simply to allow them to catch me without admitting they were catching me. Then once they went past I went and caught up to them.

We hung together until about 10 miles before Assateague Island. I went off the front and didn’t see them again. When I arrived at the rest stop I met a rider from MTCC-New York. “Webb” was cramping and I pulled out one of my Hot Shot drinks to eliminate cramps. He was surprised I gave it to him and asked what he owed. I told him if he liked it he could buy some and the next time he sees a cyclist with cramps he could pay it back. He drank. His cramps went away.

I left the rest stop solo. Again. Once over the bridge, I joined four riders from MTCC-Philly. The five of us, four men and one woman, were taking equal pulls. I thought we might have 20 miles of this.

After 2-3 miles a larger group passed us and soon we were part of a much larger group. For the first time today, we had a tailwind. We only averaged 21 mph on this segment but that includes creeping through Berlin. It took me 60 miles but I finally found the group I wanted to ride with. But it would not last.

We stopped at Mile 80 at the rest stop. As usual, I wasn’t staying long. I waited a little bit to see if a group would form. None did so I headed off willing to slow pedal and be caught. After 10 miles on this 18-mile segment, I shifted from wanting to be caught to not wanting to be caught. I wasn’t.

I went through the tunnel at the college, stopped long enough to take a photo of the Salisbury University cheerleaders, grabbed some ice cream then slowly rode back to my car. It was a really good day and I loved all the MTCC riders I met. One of my favorite Sea Gulls yet.

I actually rode 0.2 faster last year solo but today included the last mile of getting back to the car. It’s not all about speed and I purposely rode slow today. But if it was, I am still very happy with this ride.