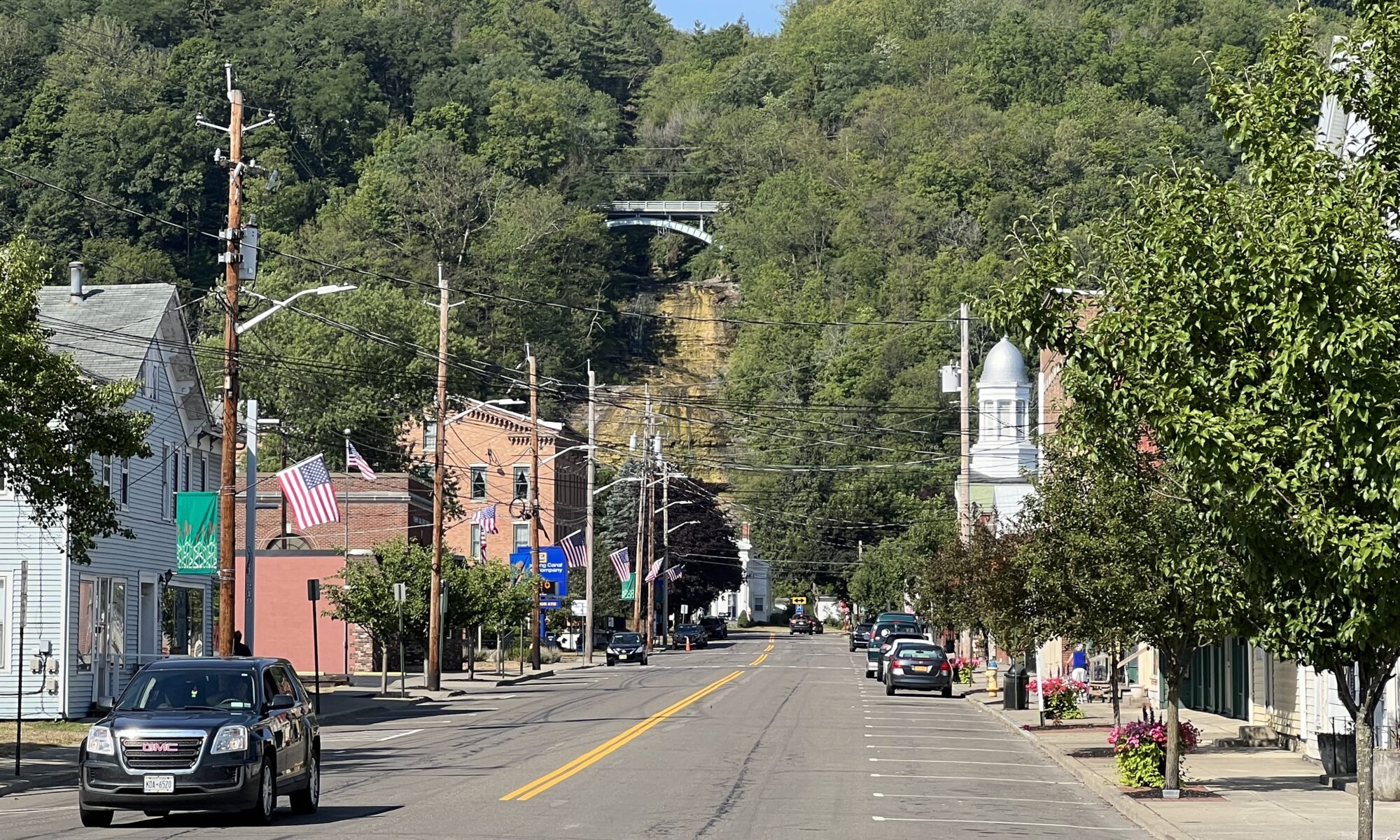 The weather forecast for tomorrow for this region is for rain. I would have stayed in State College for the second day of the MS ride but this ride became a bucket list ride. I did not want to let a wet forecast ruin it. I moved my schedule ahead by a day and came here to ride.

I have never been on US 15 north of Williamsport, Pa. The drive was stunning. Heavily forested mountains. A beautiful lake near Tioga. It would be hard to find prettier scenery on my ride than I did on my drive.

I found a ride someone had done in RidewithGPS and downloaded that to my Wahoo head unit on my bike. I would follow his ride. I had a problem envisioning where to park and found an elementary school that I assumed would have plenty of parking. It did.

I chose Montour Falls because I had read that this was the town where the opening scenes of the Hallmark Channel’s mystery series, Aurora Teagarden, were shot. The actual shooting was in British Columbia but the opening scene or main street was here. It features a quaint downtown with a massive waterfall at the end of town.

I only went a couple of blocks and there I was. Standing in front of a rock formation on a hillside. This was no waterfall. In fact, there was no water. Actually, once I looked close I could see a trickle. But it was as though someone turned off the falls. This was very disappointing. The only thing that would have been more disappointing was if I had saved this for the end of my ride and for 48 miles I was looking forward to seeing it. At least this way I got the disappointment out of the way quickly.

And now for the ride. Quaint downtown. I left Montour Falls via NY 14 which has a wide shoulder to ride safely. It’s about a three-mile flat ride to and through Watkins Glen. This is the tourist area of the region whereas Montour Falls has very little. At the end of the main drag, I came to the south end of Seneca Lake. The ride description was 20 miles of easy climbing followed by 20 miles downhill.

Actually, it was 1.5 miles of 3-4% grade leaving Watkins Glen to a plateau along the lake for five miles. Then it was turn to the west and gentle climbing for the next eight miles. The roads were mostly back roads with little to no traffic but there were “heavy” roads – tar and chip variety which makes pedaling harder.

Once the road started downhill so did the headwinds. I knew it would be that way because I enjoyed a nice tailwind leaving Watkins Glen. I was paying for it now. The traffic was mostly respectful but on one road it seemed every vehicle was a truck pulling a wide trailer with a race car on it. On a Sunday morning. Near Watkins Glen. Who knew?

The return back was on NY-14 again. And except for a couple of places getting squeezed, there was a should to ride safely. I changed my return to me directly to the car instead of the end of the route which would take me to the non-existent falls. I would have been so disappointed. But it was OK. It was a beautiful ride. Maybe next time there will be water in those falls.