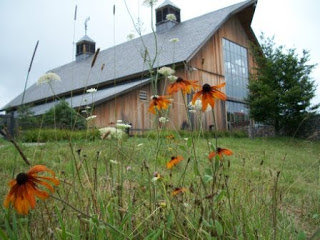 We are usually in a hurry wherever we are. One nice thing about this trip is that I can take my time. No clocks although my body clock still awakens me each morning at 5:30 a.m.

I miss Ashley. My daughter has traveled with me twice on this trip to be my driver; the person who drives to the top of the mountain and waits for the fools on bikes. In 2007 when the race was canceled, twice, and a number of people were hammering the decision not to let us ride in zero visibility, 70 mph winds and 34 degree weather, I wrote to Mary Power and told her what a great time I had with my daughter. This was a special time of father and daughter and I miss her not being with me this year.

Ashley was ready to go with me in July for Newton’s Revenge but I wasn’t. This week she started orientation for a new teaching job in Shepherdstown, West Virginia and is in daily rehearsal for Sweet Charity.

I arranged with a friend to go with me but a last minute family visit derailed those plans. So I left yesterday by myself.

My plan was on Wednesday to arrive the Mount Washington Valley early and ride the 65-mile circumference of Mount Washington as suggested in the March, 2007 edition of Bicycling. But gray skies and awful planning derailed those plans. Who knew I left myself 4 1/2 hours short of my destination Tuesday night?

There were rain clouds in Connecticut and there was rain in the Mount Washington Valley. I decided to take a relaxing route to the valley. The quickest way was up the coast outside of Boston, but I went up I-87 into Vermont. The Welcome Center/Rest Area is unique. It is a new barn made to look like an old barn.

I spent more than 30 minutes walking around and even found a connection to WiFi. Just the fact that one is on the Interstate probably means we’re in a hurry but this was a day to relax and smell, or at least, photograph, the flowers. I traveled the two lane roads across New Hampshire. At one point, just outside of Keene, NH, I entered “Dick’s Sporting Goods” into my GPS and was surprised there was one just six miles ahead. I stopped and shopped. I bought three Livestrong shirts which were no longer on the Livestrong website.

I stopped in Meredith, NH, to admire beautiful Lake Winnipesaukee. Apparently, it even doubles as an airport.

I arrived North Conway, two hours later than the Garmin-predicted 4.5 hours. I unpacked and waited until the rains passed.

The 65-mile ride was out but I wanted to try my hand at Hurricane Mountain Road. HMR is a nasty two-mile climb which the sign warns of a 15% grade. That’s the highest percent grade I have ever seen on a road sign. I have some history with HMR. Disappointed in 2007 when Newton’s Revenge was canceled, Ashley and I went to the Weather Discovery Center in North Conway. We met a wonderful older woman who asked me if I had been up Hurricane Mountain Road. Professing my ignorance, she told me of this ride all the locals do. She said if I can get over that I can get up Mount Washington.

I jumped on the bike and went out to HMR. At the bottom I saw the signs warning of the steep road ahead. No RVs or large trucks allowed. One hundred feet later is an entrance gate closed in the winter. The road starts steep and gets steeper. Two years ago I got about two-thirds of the way up and had to pull over to catch my breath. After a couple of minutes I was able to get back on the bike and finish the ride to the top. Only then did I realize I had a 25 tooth rear gear and not 27.

Having made the change to 27 last year, I excitedly went on Thursday to HMR to test myself with the new “easier” setup. And I made it to exactly the same place before I had to bail out. This was not good. Friday morning I went back and rode as slow as I could in the easiest gear. This time I made it up.

And so in 2009 I have a new gear setup. Unable to put in the long ride I went for HMR one more time. It was hard. But I never thought about stopping along the way. I did think about how my back hurt. Standing “out of the saddle” on a 6% grade is sort of cool. Standing on a 15% grade hurts the lower back. Now it’s coming back to me. These are not roads where you earn a “whew-hoo!” as your descent. This descent is one that without brakes you go from 0-60 in 5 seconds. All your weight is forward and using the back brake on wet roads means sliding out. Both hands were cramping from riding the brakes. It was not a fun descent.

But I made it down safely and rode to Fryburg, Maine before returning to New Hampshire. The legs barely were sore but I’m not sure about an 8-mile climb on Saturday.

One Reply to “Stop and Smell the Roses”