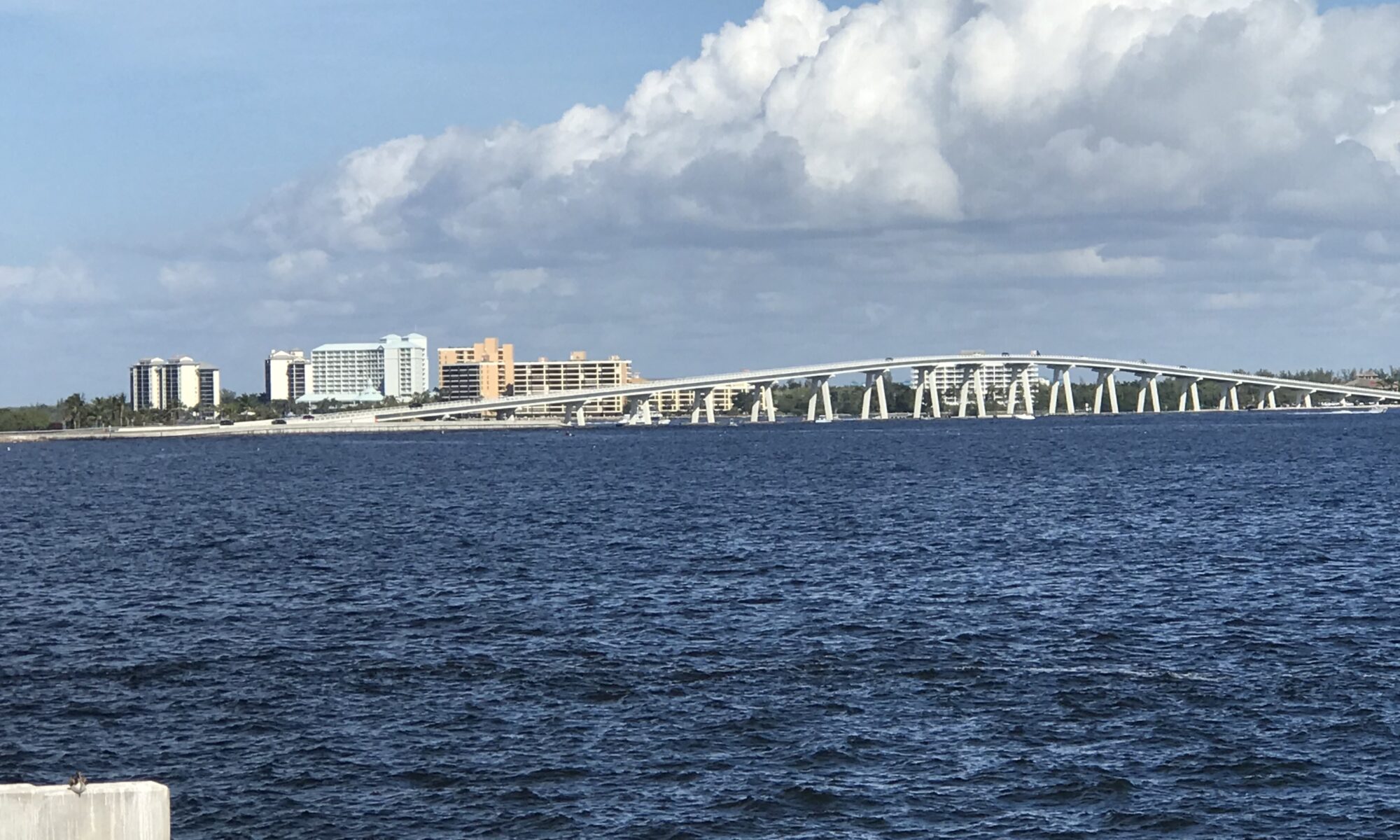 This was farther south than I had planned, some two hours from my hotel in Sarasota. But you’re only here once, or here once to ride, so I came to check it out.

I went through, or around the toll both and started the climb up the first bridge of the causeway. That too caused some people angst in deciding whether to ride the causeway. “You know the bridge is a hill…”

It was a nice ride across two islands, named A and B, on the causeway. Although Sanibel proudly boasts 20 miles of bike paths away from traffic, once I reached the island I saw slow, helmet-less riders on the trails. And while pretty, the bike paths had a lot of twists and turns. I stayed on the main road and only angered one person – a driver from Indiana laid on his horn as he passed me. Then I caught him.

I had come to an intersection and found a cyclist waiting for his partner. He wore a helmet and a full kit. I asked him about riding on the roads and it said it was legal but then he recommended as I got close to Captiva to take a path because the road narrowed and “the drivers got older.”

I followed his suggestion and found the path was very narrow, perhaps the most narrow path I had ever been on. I crossed a bridge to get on Captiva Island and didn’t realize it.

Things were going well. My speed was up. The temperature was great. And then, the tell-tell sign of a squishy tire. Ugh.

I pulled over not confident in my ability to repair the tire. I pulled the wheel off the bike and was looking at a man who had brought his trash out to a bin. He asked me if I needed anything and I told him a floor pump. He said he’d be right back and did come back with a pump.

While working on the tire I had cut myself. Blood was coming pretty good. I had my repair kit on a small log. I picked it up without realizing it was covered by ants. I saw black spots on my hands and realized the ants attacked me. They were biting and may have been drawn to my blood.

Unfortunately, the pump did work as advertised. But the man, “CW,” also told me if it didn’t work to come to his house because he had a truck and would take me anywhere. I went to his house. I threw the bike in the back and I declined his offer to take me to his car, instead opting for the closest bike shop, Finnimore’s Bike and Beach Rentals.

We pulled in and I was able to borrow a pump while CW and one of the employees, maybe the owner, enjoyed seeing each other. I pumped up the tire and he told me to take it for a spin to make sure it held. CW drove away. I went 20 meters and the tire was squishy.

I removed the tire and tube and found embedded glass in the tire. Being a rental shop they didn’t have much in supplies but sold me a 700×35 (35-42) for my 32 tire. I installed it but the stem was too short to attach a pump. I was screwed.

The shop gave me one of their rentals to ride back to my bike. They had a heck of a time removing the platform pedals so I could put my pedals on the bike since I was wearing Speedplay cleats. But they got them off the bike and I moved my Speedplay pedals over to the Fuji.

It was a nice ride back across the causeway. I got back to my car and then drove through the toll booth that I tried to avoid.

It wasn’t the ride I was hoping for. But I found the goodness of man. CW giving me a ride to the shop. The shop ultimately giving me one of their rentals to ride back to my car. There are good people out there.

The ride was paused in Captiva and the Wahoo turned off at the bike shop but still shows the airmiles back to the shop. But the data is correct.

EPILOGUE – It’s hard to think straight under pressure. With a tube that could not be repaired (but did they have a patch kit to sell? I don’t know), we decided it was best to take their bike, ride it across the causeway to my car, then drive back.

I had everything I needed for a repair in my car. If I could do it over again, I would have ridden to my car, grabbed a new tube (and maybe a new tire as well), returned to Finnimore’s, and then change out the old and ride from there. Oh well, it was getting late in the day and I didn’t arrive in Clermont for the night until 7:00 p.m. so the car option was probably best. It’s just that I never thought of picking up a new tube/tire from my car.