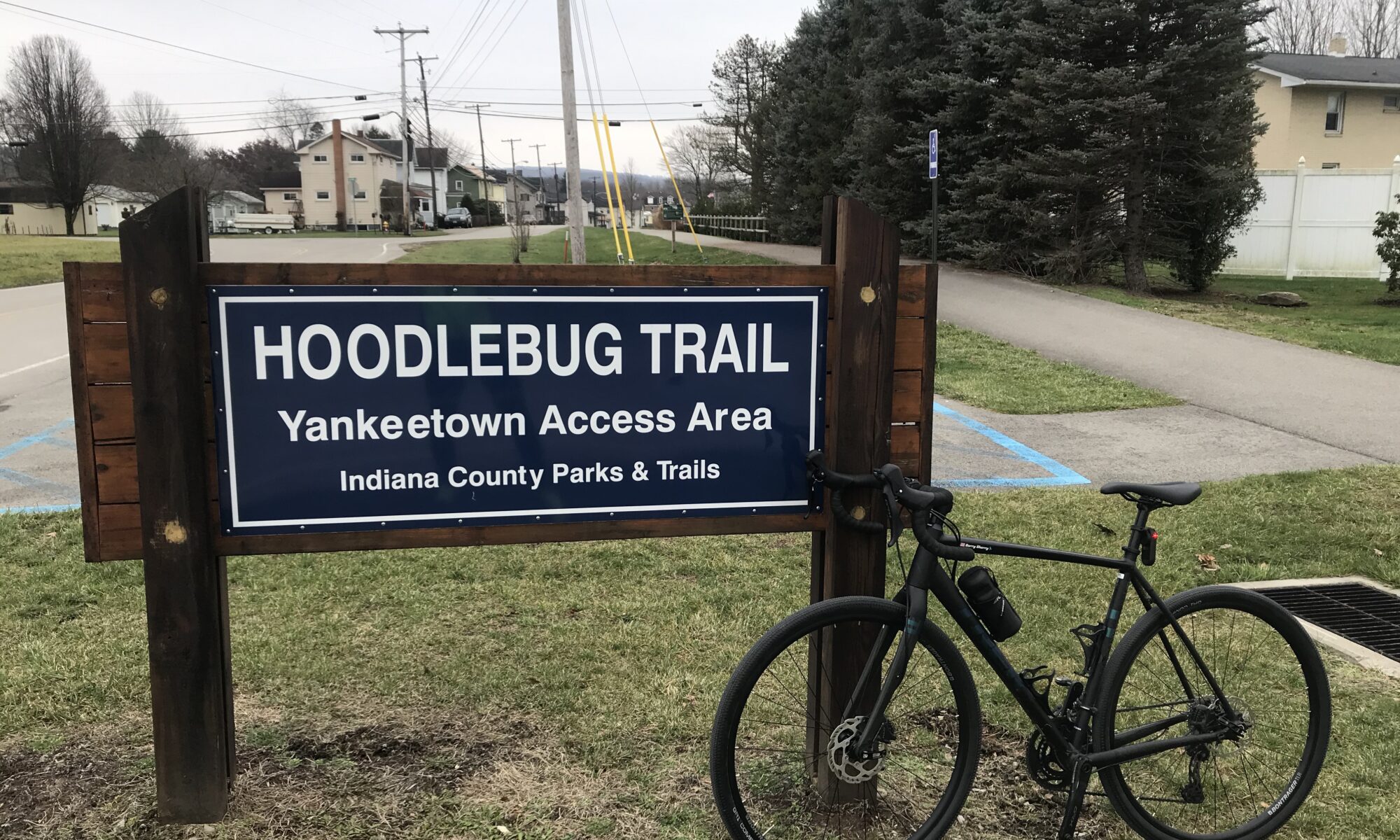 It was cold. It was 32° (freezing – 0° C) as I rolled out. I trusted my phone app to find parking and a trailhead. It was an open area but there were a few trucks from the Indiana County Parks department working in the area. There was a sign: Property of Devine Destiny Ministries – Park at Your Own Risk.

It was perhaps 50 yards on an access trail to reach the actual Hoodlebug Trail. The trail follows the rail line of the Indiana Branch of the Pennsylvania Railroad, an 1850s line that ran from Blairsville to Indiana. Single self-propelled cars ran on this line into the 1940s. Called Doodlebugs, or locally, Hoodlebugs, it became the nickname for this line.

The trail runs 12 miles from Indiana to Black Lick and connects with the Ghost Town Trail. Because of the cold, I planned to ride five miles out and back or 10 miles total.

At the access trail I didn’t see a sign, not that there wasn’t any. There were men working on the trail on their truck may have blocked the view.

It was gray without a hint of sunshine. I had no idea which direction was anything. I headed right which turned out to be south towards Black Lick. The trail is parallel to US 119 so despite a wilderness feel at times, I was never far from the din of the highway.

I crossed the Stoney, Two Lick, and Yellow Creeks. In Homer City the trail ended briefly and followed a two-block work around (not a detour because this is permanent). I had gone a little more than five miles and decided a turnaround was in order. Ten miles would be good enough today.

When I got back to the access trail, at a little more than 10 miles, I decided to continue north to see where the trail would lead. IUP is where. The trail cuts through the Indiana University of Pennyslvania (IUP) on the street. Before reaching IUP the trail was paved with emergency call boxes every 100 yards or so.

I am much more comfortable on a trail with no improvements than I am on an improved trail with emergency call boxes. Nothing says danger more than the need for these call boxes. I imagine this section is also used as a night walk on campus.

I followed the trail on street for a while but wasn’t sure how much farther it went. Nor did I need to find out. I turned around while on the IUP campus and headed back.

The trail is crushed gravel. It was a good riding surface. But there was nothing structural or natural as big attractions. It’s a nice trail and maybe the perfect length for some riders. I would not make this a destination trip but I was already in Indiana so this was the perfect ride on this day. Except for the cold.