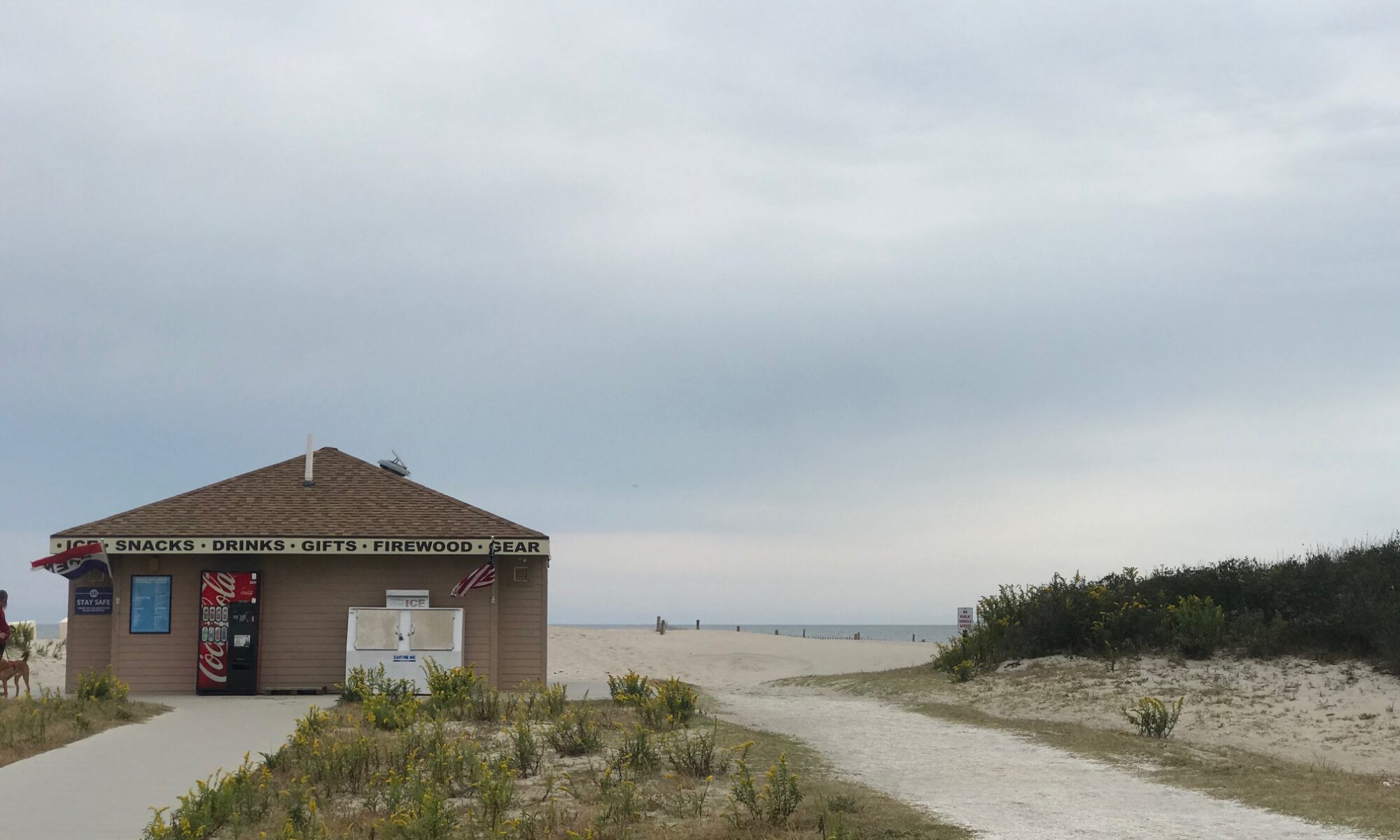 All my events and rides for 2020 have been canceled. When the Sea Gull Century announced their cancellation about three months ago, I decided I would do the ride anyway.

My plan was to stay in an Ocean City hotel rather than Salisbury. I checked in and no mention was made that the sign which stated “Breakfast Served Daily 6:30 – 9:30” didn’t actually apply. I would discover that in the morning when the nice young lady said they don’t serve breakfast “because COVID.” She handed me a bag with a mini-muffin.

This was not good. I needed those hotcakes or waffles. A muffin would not hack it but it would have to.

There would be two major differences about today’s route. First, I was starting and finishing in Ocean City rather than Salisbury. And second, I decided to ride the normal route backwards. I did that to see the route from a different perspective and it would also let me see who was on course today. Was I the only one or would there be groups of riders today?

Some allowances would have to be made on my ride because this was not an official event with SAG support and rest stops. There would be no water or Gatorade on course. No fruit or cookies. No port-a-johns.

I decided that because I knew where most of the country stores or gas stations were, I could stop and get water and food on the route. As far as port-a-johns, the route traveled through lots of forests. I could do this.

It was gray when I rolled out at 7:38 a.m. And it was windy too. I never did get a handle on the wind direction. Being a loop course, sometimes it was a headwind, sometimes it was a tailwind, and the rest of the time it was a crosswind. But there was always wind. Always. And the sun shone for about 15 minutes.

In Newark, I passed what was normally one of our rest stops and saw a group had set up a tent. I passed and said hello then went back to talk to them. Although the tent was for Mid-Shore, from Salisbury, the volunteers were from Virginia Beach. I asked them who they were supporting and one guy said “any cyclist who comes by.” They offered me something but I was only 17 miles in and hadn’t really started drinking so had nothing to replenish. I declined.

It was perhaps a mistake by me not to carefully retrace the route backward. In building my course RideWithGPS seemed to follow some previous routes that I had done. I never checked the details. The first instance where I went off-course was in Newark. I recognized I was going to cross the dangerous tracks the course used 3-4 years ago where there were lots of falls. I made it through OK but there wasn’t a legal way to cross US 113. But I’m on a bike and I can do anything.

I had made myself a deal that I would stop near Snow Hill at the Assateague Bay. Except the route I was following never took me there. I knew there was a port-a-john in the park there so having missed it, I would have to improvise. I also hoped that I would follow the perimeter of the Salisbury Airport but rode past the entrance. There may have been a detour in place though so it worked out.

But the biggest change was in the town of Berlin. In the regular route the ride returns through Berlin. It is routed through a residential area before hitting the country roads. Going backwards today, my Wahoo took me right into the downtown. And what a charming, beautiful place Berlin, Maryland is. What a great discovery. And I also understand why the organizers would not want to send 8,000 cyclists through here.

In Salisbury, I stopped very briefly at a Royal Farms, store and gas station. Should I replenish or not? I check my water levels. I had eaten just one of my gels at that point and was 57 miles in. I ate the second and through away the wrapper. I decided I was good to go, and if not, could stop near Assateague.

The winds were brutal at times. Approaching Berlin I was overtaken by a tractor. I was riding at 21-22 mph and wasn’t sure he could go much faster. But her did. Once he passed I sped up to 28 mph and was sitting in his draft. I thought I could ride all day at 28 mph in his draft but probably only got a half-mile of draft before he turned off.

The groups never really materialized. I did see a peleton of about 40 irdes going in the opposite directions outside of Berlin. And turning onto Assateague Road I was passed, then integrated, with a group of cyclists. They were a group from D.C. (or near D.C.). We only had three miles to the Assateague parks and they went into the state park and I went to the National Park.

I have a lifetime pass to U.S. National Parks. I thought my chance of spotting a wild horse on Assategaue Island was better in the National Park. I saw lots of horse poop but no horses. I don’t remember seeing a seagull either.

The line to enter the park was enourmous. Seemed to be at least one mile long. But there was a bike path so I rode on the path. As I approached the ranger station the path went away from the station and into the park. Although I have my pass there was not place to present it. Not sure if it’s intended but it looks like you can bike into the national park for free.

I wanted to do a six-hour century. I never checked my time but figured that I would get back to my car around 2:00 p.m. A six-hour century requires one to average 16.7 mph. I wasn’t sure if I could but needed only to look at my past rides here. In 2016 I averaged 17.1 mph. In 2018 I averaged 17.3 mph. In both of those I was pulling for some slower riders.

I was pretty excited to see that I averaged 17.9 mph today. While it was my best ever, it wasn’t appreciably better. But what was different was I was solo the entire ride today, except for a brief interlude behind a tractor and with a cycling group. So I am pretty happy with this ride. Very happy.

I have really mixed feelings about my performance on this ride. At first I was pretty happy with the average but upon review, it’s in the ballpark with other rides I’ve done here. It was only 0.2 faster than last year and I didn’t ride in any groups last year although sometimes just being around others and you pick up the speed.

The wind? In a loop course, if the wind remains steady all day then some is headwind and some is tailwind. Then just a little protection by riding with others is helpful. But does it even out? I suspect not, much like a flat ride over 50 miles will be faster than a mountainous ride of 5,000′ of gain and 5’000′ of descent. There is something about the energy used in climbing that you don’t get back with the descent. And maybe riding into the wind takes more out of you than riding with a tailwind gives back.

Losing 35 pounds has been very helpful on rolling or hilly courses. But maybe it makes not difference on the flats, especially when it’s windy. I felt at times I was getting shredded by the wind yesterday – maybe a bigger me wouldn’t have been as bad.

It wasn’t going to be a day of PRs because I rode the course backward. No baseline to measure me by. But I did PR on the one “climb” of the day – the Assateague Bridge Climb. So maybe shedding weight helped there. I could have gone faster – much faster – but would have to be a jerk and pass riders on that narrow bridge. Still, 4th all-time age group.

Total time was 6:14 with just 20 minutes stopped. There was a chat with the tri-guys in Newark and offloading trash in Salisbury. A few photo ops. A couple of stoplights. One break au natural. Last year I was stopped for 1:14. In 2018 it was one hour even. In 2017 it was a more reasonable 35 minutes (and also a 17.9 average). In 2016 it was a ridiculous 1:33 (I joined with three riders from Blair Cycling Club – one had a flat which we stopped and waited to repair).

My other decent time – 17.9 – was three years ago. On that day I did form up with some others and was in a group a lot. So today was a solo effort.

Lastly, and maybe most importantly, there was nutrition. Or lack thereof. The hotel did not offer breakfast as advertised. No rest stops meant no snacking on the ride. And no water. I rode with two water bottles and three gels. Surely a little more fuel would have helped.