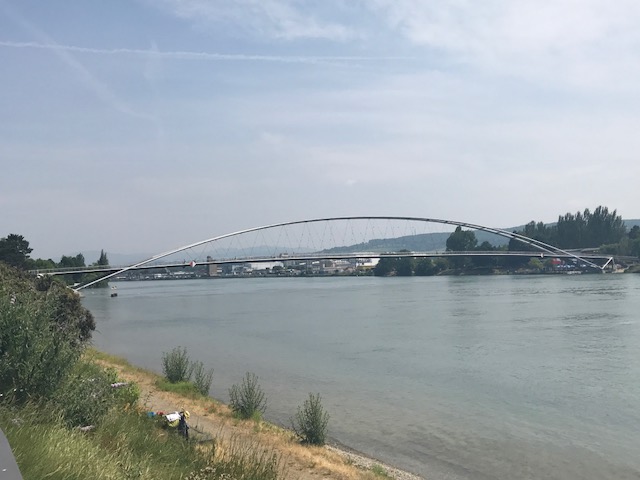 We took a train to Laufen for the start. My train ticket was 13 CHF. My bike ticket was 20 CHF. For a country that is cycle-centric, or maybe it isn’t, I think their train bike passes cost at least twice what they should be.

Laufen is near the French border of the Alsace-Lorraine region. We rode about 15 km before coming to a French sign. Ben pointed out another sign which noted that Swiss soldiers were not allowed to be on this road in uniform.

The road turned up and Ben rode ahead. We quickly established that on this day I would be first down the mountains and he would be first up. We went through some French villages although we were in the outskirts of a much bigger town, St. Louis, when I suggested we stop at a bakery.

We both got a chocolate-strawberry croissant then rode to a shade location to eat. We ended up next to a school where students were practicing a dance routine. Never quite figured out what kind of school that was.

We found our way to the Three Country Bridge that connects France and Germany but looks at Switzerland. Close enough.

Ben led us through Basel, looking for a road back to the town and the climb we did three years ago. We made some sketchy moves in traffic, i.e., probably not riding where we should have.

But we got through Basel and back into Germany until crossing back over at a dam on the River Rhine.

It was hot, with temperatures in the low 90s. I carried two bottles and was going through those fast while Ben had just one.

We looked for water – easier in Switzerland than France or Germany. I didn’t feel I was getting enough and I know Ben couldn’t have been.

We began the last climb which would take us over the “hill” to Sissach. It was quite a formidable climb. Ben took off and 2-3 times pulled over until I dragged my butt up to him. I was in a granny gear and wasn’t going to work any harder. Or couldn’t work any harder.

But at the top Ben was lightheaded. His wife had biked up from Sissach (quite impressive actually) and he had planned lunch at a restaurant up the hill from the summit. A second summit.

Ben said he was so light-headed couldn’t control his bike. He rested and gathered himself and then we descended, with me being the fastest. Weight wins.

On the descent, I hit 75 kph which is 47.5 mph. Had I known I would have pushed it to 50 mph. But it was my fastest speed of the time I was in Switzerland.

Switzerland. France. Germany. It was a most excellent trip. Thanks Ben!