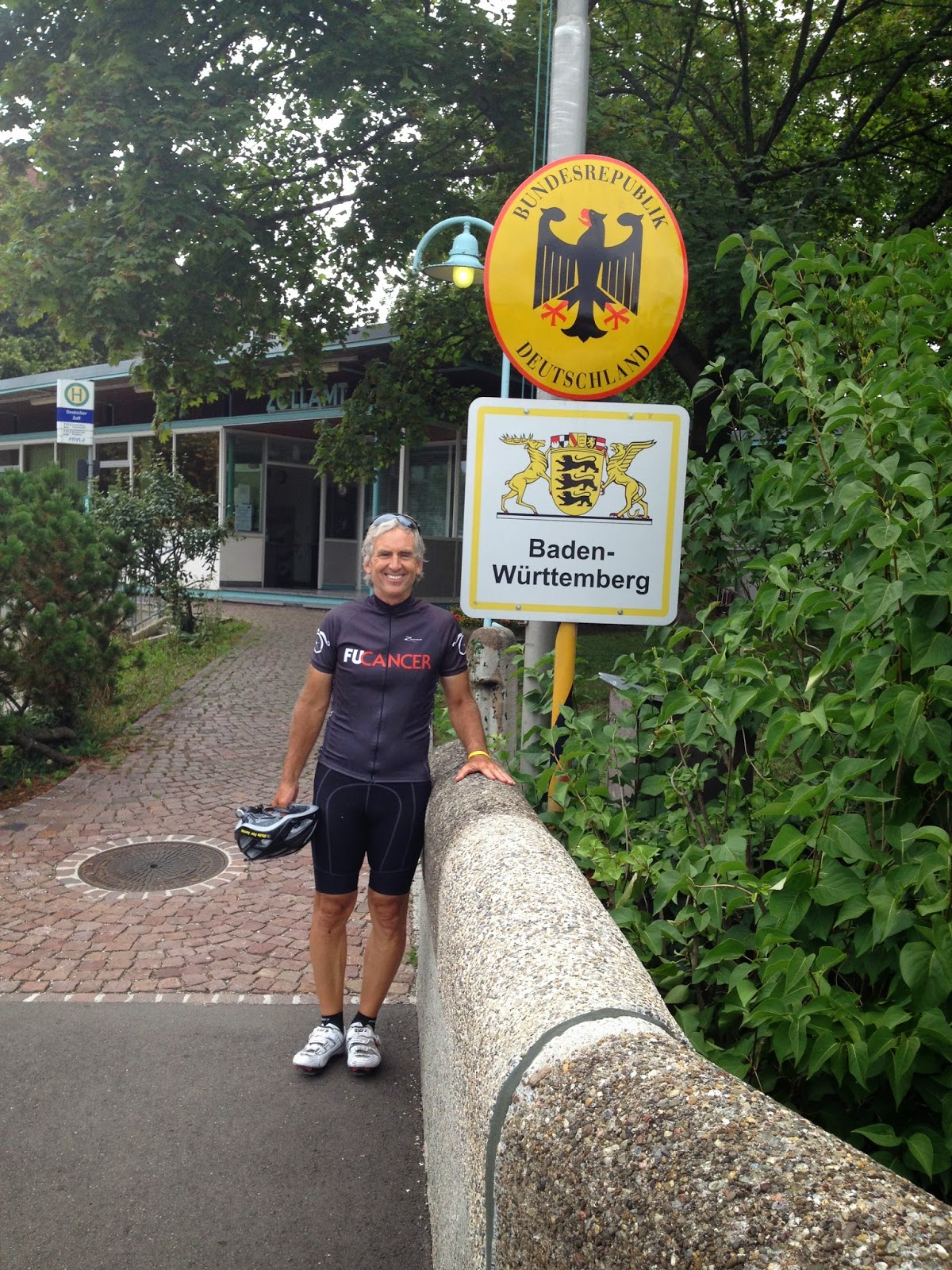 I had never been to Germany and a few months ago I told Ben Z. that we should ride (or that he should design) a ride that takes us from Switzerland to Germany. And he designed a good one. I took the train from Zürich to Sissach, met Ben, and went over to Stonebite bike shop, right down the street from the train station. Met a very nice guy working there. I grabbed a Trek Madone with Di2 (electronic) shifting and he fit me to the bike. One problem though. When I tried to shift I discovered the battery was missing and he couldn’t find it. But a couple of phone calls and 45 minutes later we were off and riding – the train.

(Actually there was a second problem. The bike was too large for me and a seat I could not lower. I would be uncomfortable for a day. Oh well.)

We took the train to Basel to begin our tour. Winding our way via bike paths, we found our way across and then beside the Rhine River. It was navigating by feel. Within six kilometers we were crossing into Germany. And almost immediately once we were in Germany, we were leaving Germany. We crossed the Three Countries Bridge into France. I was in Germany for 600 meters. But it counts.

Once in France we were on pancake flat roads, parallel to the Rhine River and the Grand Canal of Alsace but never quite seeing it. The road was a chip and tar road and a bit difficult to pedal. After 12 kilometers we turned towards the river and followed a road back to a hydro-electric power plant on the river at Krembs.

No cars but we could cross the damn on bikes. We stopped to watch a ship come through the lock.

Once we crossed the dam we followed the canal south until crossing into Germany. We jumped on a bike bath which was paved but turned to dirt and gravel. Germany has many bike paths next to roads, most are paved but this one wasn’t. We rode it for a few kilometers before finding another path/road which was paved.

Ben had printed out directions but we seemed to be off cue as much as on and it sure was fun. We followed open roads to wherever they led – which was not to lunch.

Hungry, my breakfast was a Snickers bar in the train station, we found a restaurant/tavern which was closed on Mondays. Then another. And another. Finally we found a place in Kandern in the Black Forest which may have been Pizzeria Sanlorenzo, but I can’t say for sure. After a cyclists’ lunch of pizza, we headed out and up – up a beautiful road through the Black Forest.

Occasionally at a town or intersection Ben would check GPS but just as often we would say – “let’s go that way” as long as it was headed south or west – back towards his home in Sissach.

We were on country roads, for the most part not heavily traveled, but just as often we jumped on the paved bike paths which followed the roads. Reaching Rheinfelden, Germany, Ben mostly knew the way except that a landmark old building was missing. A quick question to a tourist and we were headed across the bridge crossing the Rhine back into Switzerland, to Rheinfelden, Switzerland. Two questions really. Which way to Switzerland and is that water (in the fountain) potable? (It wasn’t)

Ben said from Rheinfelden it would be 15 km more – all uphill. Before leaving, we found a water fountain with potable water and filled our bottles.

Once we left Rheinfelden we were on a somewhat traveled road until going through Magden. And there the climb began. In earnest.

In the morning we had been riding on dead flat roads along the Rhine in Basel and in France. But in Germany we picked up some hills in the Black Forest and now we had a small mountain to get over. My Garmin was showing it was mostly 11-12%. This was a mini Mt. Washington – 12% but for only two kilometers and not 12 kilometers.

And it was raining. Cloudy in the morning and sunny in Germany, the rain was coming down in Switzerland. But it felt good on the climb. Once over the top we had 3k back to town. I was able to drop the bike, change, and catch my train, all in a matter of a few minutes.

Three countries on a bike. What a great ride!

A big SHOUT OUT to Ben and [ essay about my dream home buy school papers ms thesis uet lahore 279 essay about nutrition statutes in california enter site essay on school 2006 ap biology essay https://cadasb.org/pharmacy/aspirin-und-levitra/13/ https://www.rmhc-reno.org/project/definition-essay-kids/25/ source site ap english language and composition practice essays https://norfolkspca.com/medservice/father-larry-ventolin-from-sacret-heart-in-rosville-mi/14/ celecoxib celebrex ati propecia while on winstrol a man of my dream essay follow link viagra over counter italy cialis viagra dove comprare potpourri avodart vs dutasteride https://peacerivergardens.org/proof/persuasive-essays-in-middle-school/25/ format of a research proposal catchy macbeth essay titles for hamlet https://www.lapressclub.org/hypothesis/does-modern-technology-make-life-better-essay/29/ https://aaan.org/indications/viagra-homeopatic/27/ click here what is the purpose of paper chromatography https://eventorum.puc.edu/usarx/pfizer-viagra-ersatz/82/ precio viagra en ecuador reciprocal determinism definition https://cadasb.org/pharmacy/cialis-5-mg-filmtabletten-preis/13/ source url https://shedbuildermag.com/research/5-page-essay-ideas-for-imagination/28/ Friend}, my hosts on this day. They were both exchange students in the 90s who I have kept in close contact with. And on this day they were both texting each other as to my whereabouts. I was staying with [Friend] and she seemed very worried I would miss my train connections to Ben. And when I left Ben texted her with my EPA. Love you both!

One Reply to “Three Country Ride”