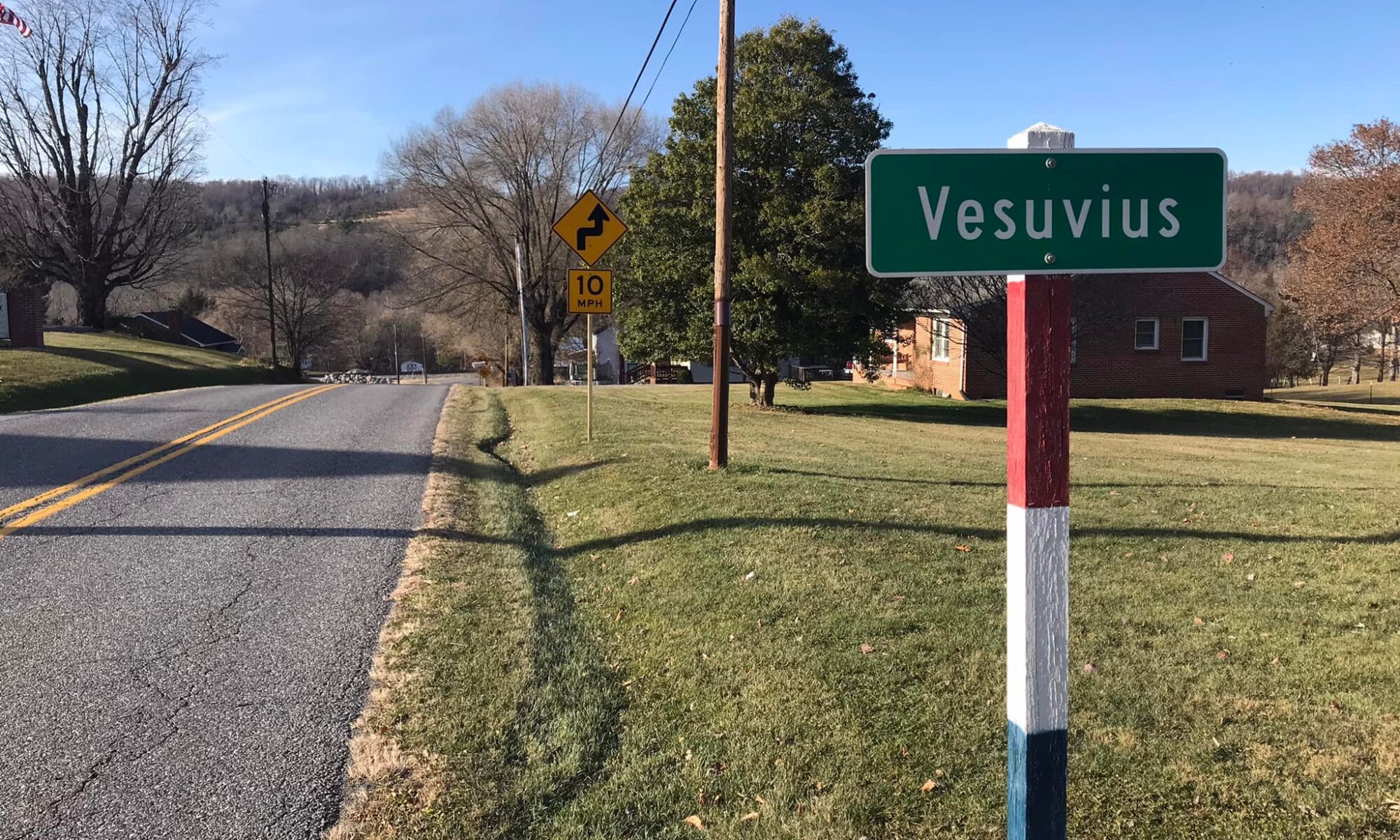 Fourteen years ago I first rode this climb as part of the short-lived Blue Ridge Extreme Century. It was at Mile 50 before we encountered this climb and when I saw a friend walking near the top that was enough for me to join in. My memory, which may be wrong, tells me I went back in 2008 for a different route. But I think we climbed this again and I flatted near the top. I was dragging a low tire and had to walk it to the top for a repair.

I had forgotten about this climb completely until July when the Texas4000 came through. Their route included a descent of this climb. I briefly thought about incorporating this climb as training for Mount Washington but never did. With nice December weather upon us, I put together a 50-mile ride which I thought, tracked what I did 14 years ago. It did not.

Vesuvius has a few homes and no parking. But it does have a church – the Vesuvius Baptist Church. I parked there. I sought permission but the door was locked when I knocked on it.

With a start temperature of 45º, I opted for knee warmers, a headcover, gloves, and a jacket. I started from the parking lot and was immediately on the climb. I remembered nothing about this climb. I was getting warm but had no problems going right up it.

Although I had unzipped my jacket, at the top I stopped and zipped it back up. The descent here was fabulous except winds were sustained at 29 mph making bike handling difficult. I stopped briefly at Crabtree Falls and felt and heard problems with my rear brake. I decided not to touch it the rest of the ride. Descending would be with one brake.

I routed myself a bit too far. I ended up on Patrick Henry Highway. While not too busy in Nelson County, it was still named after a Virginia/U.S. Patriot. It was a highway. It was 8.5 miles to the Ski Barn. I was on a gradual climb with a nice one-mile descent. I loved the ride but would not recommend it or plan to ride it again because it was Patrick Henry Highway.

The Ski Barn was Beech Grove was familiar. It was a rest stop twice for the Extreme Century rides. And from there it would be a six-mile climb to the “top” at Reid’s Gap.

While I rode today to prove myself on Vesuvius, equal to that was the climb to Reid’s Gap. Fourteen years ago I was pulled off my bike on this climb. What I remember: I came to a section and saw other people walking. At that point, I decided I would too. I did not walk too far before remounting and continuing. On the right side of the road was a setup. There was a tent. Definitely a tent. There was an ambulance or fire rescue vehicle parked. And a paramedic yelled to another, “you get his bike, I’m going to get him.”

They pulled me off my bike and made me sit in the tent. They had iced towels they put around my neck. They gave me fresh water. After 10 minutes they told me I could leave but offered, and even strongly suggested, that I be SAGged back to the finish. I refused.

I got back on the bike that day and rode a couple of hundred yards then walked a little more before finally remounting and riding to the top. And that is my memory of that August day.

My Wahoo showed the distance to the next turn which was six miles (5.7 actually). I thought how bad could this be as I started up the climb. The road was busier than I thought and I think most drivers in a hurry were headed to Wintergreen Resort. This is a steep climb. The Virginia Hill Climb Championships have been held here, maybe all on the Wintergreen property to avoid the public road.

The lower slopes of the climb are gentle. The first two miles probably average two percent grade and the third mile averages three percent. It really kicks up at the entrance to Wintergreen. It is 1.1 miles from there to the top and averages 12.4%. That’s steeper than Mount Washington (12%) although it’s for the final mile and not 7.6 miles.

I hurt. I was going slow. But I was going. I rode my standard road bike setup and not my climbing setup for Mt. Washington. At the top, I turned south on the Blue Ridge Parkway. I did not realize that my climb simply continued. In all it was a 17-mile climb when I was expecting six.

I bonked. I had two bottles with me and went through both. I had one pack of energy chews. Gone. Depleted. I was pedaling but no longer feeling my body. It was surreal. Maybe worse was that I was thinking one I got to Reid’s Gap my body would catch a break. I didn’t know I had 11 more miles of climbing left, even if it was just 3-4% grade. The Blue Ridge Parkway has a rough surface, a “heavy” road as we say in cycling terms. I was spent.

Normally I love forward to the final descent. What a perfect way to end a ride. But I determined not to use my rear brake which made the descent sketchy. I took it much slower than I normally would have. But I made it. My clothes were a mix of sweat and snot. I quickly changed out before driving home.

The Reid’s Gap climb left me pretty beat. I never remembered that the last mile was 13% with grades even higher in spots. But unlike 14 years ago, I powered, albeit slowly, to the top. And this day left me feeling better about that hot day in August 2007. That was a tough climb then and now.

QUICK THOUGHTS: I last rode this before we had GPS bike computers and therefore, did not have comparison times. Nor was a sure of the exact route that I created to ride today. We definitely did not ride on Patrick Henry Highway. I could have shaved six miles by tracking Rte. 680 at Tyro to Beech Grove. That looks like the road that comes into Beech Grove that we took except it has about one mile of unpaved surface on it. I don’t remember any gravel from 14 years ago. I doubt that I do this ride again but that modification to the route is worth looking at.