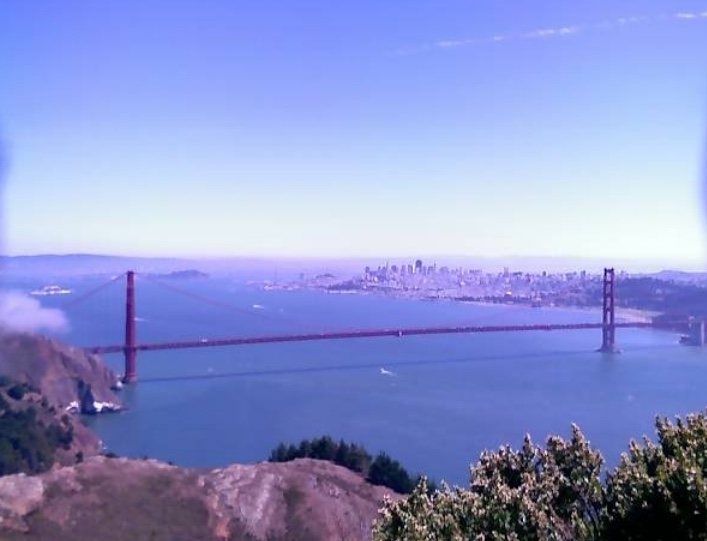 I’ve been off the bike for a while. During the Blue Ridge Extreme I thought I had a problem with my rear wheel as it was rubbing on the brake. I had been riding for 50 miles of climbing (and descending) with the brakes on. I concluded the wheel was out of true.

I took it to my local bike shop and discovered the wheel wasn’t out of true but that the rim was cracked. Yikes!. Trek has a five-year warranty so it was covered but I was without the bike for a week and missed the Potomac Pedalers Century which I hoped would be my last long ride of the summer.

I picked up my bike on Monday and was able to ride Tuesday which felt great. I then left for San Francisco on Wednesday hoping to make the highlight of my trip a bike ride. (Don’t tell my bosses.)

Needing to rent a bike, I settled on Bike and Roll at Columbus and Lombard Streets. I was fitted, well not really fitted, for a Trek 1500 road bike. Not fitted because the seat was too high. Three times I asked that it be lowered one inch and three times it was lowered about 1/8″. Finally, I accepted it and rode away.

I was at the corner of Lombard Street, the famous crookedest street in the world. I looked up and could see the street calling me. I didn’t have my Garmin Edge with me so I can only guess at percent grade. It was about a half-block climb up to and across Taylor Street. I would guess that was about a 10% grade. The second block was an honest long city block up to Jones Street. I would guess it kicked up to 15-18%. After Jones Street, it is still steeper up to Leavenworth. I read it was 27% but have no way of confirming that. It sure felt like it though.

I didn’t know the bike and just put it in the lowest gear possible. I struggled to keep going and thought I would have to abandon before reaching the top. I didn’t look up but kept the eyes focused on the front wheel. Breathing heavy and loud was my sign to the tourists standing at the base of the crooked part of the street to move out of my way when I got to Leavenworth. I don’t remember ever breathing so hard. It was a short climb but very steep. I made it then stopped to survey the view.

Beautiful. To my right, an extension of Leavenworth Street, one could see the San Francisco Bay and Alcatraz Island and prison. It was a warm fall day, about 75°.

I made my way over to the Presidio. While leaving the Presidio, I passed a pet cemetery which was so neat I had to go back and take a picture.

Leaving the Presidio I descended to the water level of the bay but then had to climb a hill up to the Golden Gate Bridge. I was surprised at first by the number of people walking their bikes but then it made sense. Most bikers were tourists who probably seldom ride and couldn’t resist the temptation to “Bike the Bridge.” I easily passed lots of riders here.

The bridge was crowded with walkers, many walking two and three abreast oblivious to people trying to pass on bikes. Even the families that were biking were trying to ride two abreast at a very slow speed. One just needed patience and to pick your spots to get through.

On the bridge, I noticed cyclists coming from Marin Co. were dressed in cold weather gear complete with long finger gloves, jackets, and leg warmers. I began to regret leaving my jacket and arm warmers in the car.

At the end of the bridge is the entrance to the Golden Gate National Recreation Area which climbs a steep hill and provides a wonderful view of the Golden Gate Bridge and San Francisco, as well as the Pacific Ocean.

I began climbing on my bike with its too-high seat. I didn’t see any other riders here. I was right that almost all riders were interested in biking across the bridge but climbing a one or two-mile hill was not for them.

I was near the top, pedaling my own rhythm when out of nowhere a young lady passed me. I hate that. Everyone is better than someone and everyone can find others who are better than they are. And I was on a rental bike with a hideous saddle bag on the front and uncomfortable at that. Plus I had climbed up Lombard Street.

Who knows where she came from but she certainly looked comfortable. We exchanged pleasantries and I settled in about 10 meters behind her. That was about where she was when I realized she had passed me. She was out of the saddle and I was in. I maintained that distance for a while and then decided to match her tempo out of the saddle. Once I did she began to pull away. I was actually riding better in the saddle than out although being out of the saddle was a little easier on the legs.

When I reached the top I wanted to keep going but I had to stop. The view back to San Francisco was just too great to pass up. I only had my cell phone but still wanted to snap a couple of pictures.

Here began a dangerous one-lane road down towards the Pacific. I took it. It was one of the scariest roads I have ridden. One lane, steep in sections, and only a guard rail preventing me from going over a cliff down to the rocky ocean coast, maybe 100 meters below. On my Trek Pilot, I would have sat back and bombed the descent but I was not comfortable on this bike. I felt my butt was too high which is scary while descending on a steep oceanfront road with many sharp curves.

I came to the bottom and stood over the ocean. It was absolutely beautiful!

I wondered how I would get back and what climb I would have to get back up to the top of the hill I just descended. I took Bunker Road back and had a 3-4% climb but nothing big. Then I came to a tunnel. That was a surprise. A very pleasant surprise.

The tunnel was one lane and I waited at a traffic signal (five-minute delay) until it was time to enter. There is a bike lane on either side and cyclists are to stop, press a button, which illuminates a flashing light “Bicyclist in Tunnel.”

At the end, I found my way to Sausalito up to Mill Valley then turned around. I went back to Sausalito, waited for the ferry, then headed back to San Francisco. A highlight of a bike trip in San Francisco is a ferry ride across the bay. It was back to the Embarcadero and another mile ride back to Bike and Roll.

I had enough. I probably rode 25 miles but my back and shoulders were aching from a bike that wasn’t fit very well. But it was a great day! I hope to get back and do it again. Soon.