It is April but unseasonably hot. In Frederick, Md., the temperature reached 97º (36º C). It wasn’t much cooler in the Blue Ridge.

This was advertised as a BB/B pace ride. While I often ride at a BB pace the problem with a BB ride is that some A riders jump in and ramp up the pace.

We left Marshall, Va. at 9:35 a.m. I was already hanging back adjusting my heart rate monitor. When we got to the open road I sat in behind five riders. The pace seemed slow — too slow, and when I got a chance I decided I was going to bridge up to the first group. Two groups had already formed and I wanted to ride with the faster group that was already about a half-mile ahead. I took off on my solo venture.

For the next five minutes, I could see the front group about 1/4 mile in front of me. So we had the BB Group followed by me a quarter mile back and then the B Group, another quarter mile behind. I truly was in cyclists’ terms, in no-man’s land.

During this time one thinks about the effort necessary to bridge up to the lead group and, once one reaches them, how tired they will be. But I was determined and I thought I was closing the gap. I also thought it might take 10-15 minutes before I could fully bridge to them.

I had gone a couple of miles when I crested a small ridge and began descending. When I reached the bottom of the descent I could see the road ahead for a half-mile and could not see the BBs. My first thought — the right one — was that they could not have added more time on me.

I sat up and pulled out my cue sheet for the ride. I had blown right by the first turn. Oops! A major oops!

After actually reviewing the cue sheet I decided to turn back and go back up the hill to the first turn. I had gone at least a half-mile and knew that going an extra mile would put me behind the B Group. And no one would know. If anything happened I was on my own.

I knew not to panic and not to try to put the hammer down to reach the B Group. I just wanted to ride at a steady pace. Of course, the quitter in me said turn around and go back while the finisher in me said to keep going and I would catch them. It might be in a mile, five miles, or ten, but eventually, I should catch them.

And thus began my long lonely journey of the 56-mile Blue Ridge Ramble.

I went out to Markham and turned on Leeds Manor Road. This would take me over Naked Mountain. The ride up the hill was a little more formidable than I expected. There were long stretches of 10%-12% grade, even kicking up past 14%. I just rode a steady rhythm and kept drinking. And eating Sports Beans (by Jelly Belly).

The descent off the east side was nice; my first 40+ mph speed of the day. I could have gone faster but the pavement was very rough. I rode the shoulder on US 17 to Paris, Va. In Paris, I asked a woman who was walking if a group of cyclists came by. She said they did. When I asked how far they were ahead she told me she saw them when she was down by the stop sign. “So however long it took me to walk from the stop sign to here.”

Yea. Helpful. At least I knew they were ahead which, of course, they had to be.

Around mile 26 I was on top of Mount Weather. After a couple of miles or so of “rollers” up ahead I saw one of our riders, Klara Vraday. I had pretty much forgotten I was on a group ride and was just enjoying a solo venture. I quickly gained on her and surprised her when I said “I bet you thought you were the last rider.” I had ridden 28 miles solo.

We would have stayed together but just as soon as I caught her there was a screaming descent coming up and I wanted to bomb it. I hit 48 mph going down to Rte 7 but it does go down to Rte 7. Rather than go for 50 mph, which I wanted to do, I thought the prudent thing would be to apply brakes.

I stopped the Garmin timer waiting for Klara then forgot to restart it when I started the descent down to Bluemont. It cost me at least a mile in recorded distance and killed my average speed because I was flying down the mountain. And Garmin simply drew a straight line from where I turned it off to where I restarted it. How would it know?

We stopped in Bluemont, refueled and hydrated, and took off for Marshall. There were six of us together to cover the last 25 miles. We were still on Snickersville Turnpike when we dropped Klara. I announced this to the group then dropped back with her and brought her back to the group. This happened a second time and I did the same. The third time it happened I told the group to go on and I would shepherd Klara back to the start. She was having problems dealing with the heat and was really annoyed because those were her friends who dropped her and a stranger was the one who dropped back to escort her back.

This was a good training ride. The heat took its toll but it’s good to train in these conditions. It must make me stronger. At least I hope so.

It’s missing one mile at Snickers Gap but did record the high speed of 48 mph. And check out the elevation map. 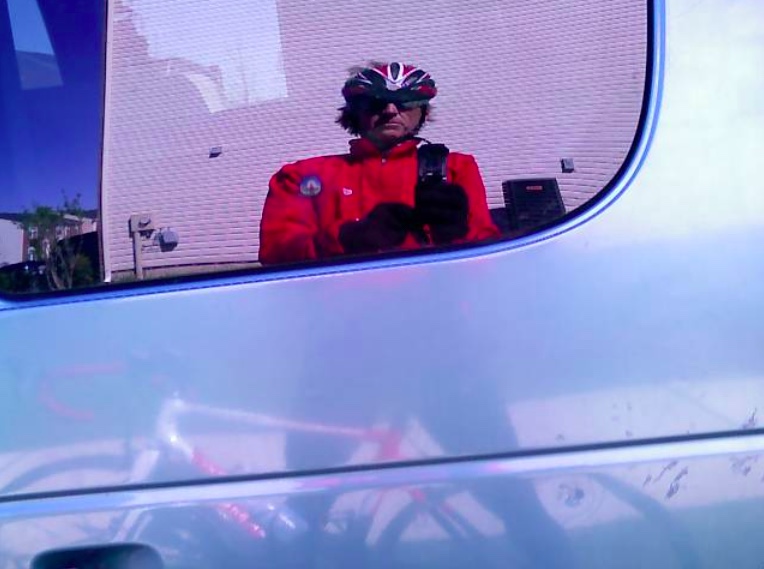 Visiting Ashley in Ranson, West Virginia, I decided to head out for a ride along the basic route of the South Mountain Loop, a 37-mile route for hybrids or mountain bikes, which originates in Brunswick, Maryland. Only one problem presented itself: I rode the route just once six years ago and would attempt to ride it from memory. I did pretty well, only missing one turn which I would do differently.

The day was cold and windy. Winds were constant at 20-30 mph with higher gusts. Temperatures were in the mid-30s to start and only climbed to near 50º (10º C) by the end of the ride. Everywhere there was a headwind. I don’t know how this could be but it was.

I turned the corner and kept climbing higher and higher. The GPS showed 12% then 14% then 18%. When it “leveled” off to 4% I decided to turn around and go back to the route I had planned. I descended at 45 mph. I could have gone faster but there was a stop sign, heavy traffic, a guard rail, and the Potomac River at the bottom.

I followed US 340 into and out of Virginia and across the Potomac River into Maryland. I passed beautiful farmland to Burkittsville, the location of the horror movie, The Blair Witch Project. It’s a lovely little village and I can’t say I saw any witches. But who really knows for sure? They don’t all look like Elphaba.

Out of Burkittsville, I climbed a ridge road along South Mountain before being dropped back into the valley then climbing up Reno Monument Road. At the base of Reno Monument Road is a large, slightly unkempt house on the left. You know, the kind where a huge dog is lurking ready to attack. Outriding dogs can present their own adrenaline rush but I’m not going to out pedal a dog while going up a 20% hill.

My dogdar (that’s like radar to detect dogs) was on full alert mainly because when I rode this six years ago I was chased by a big dog at this house. Yes – you remember those things.

I was quietly pedaling, not shifting gears, and generally trying to avoid disturbing any creatures who may live there. And then I saw him. A huge dog but I’m not sure of his breed.

And he saw me. Or she saw me. I didn’t want to get close enough to check.

The dog came flying across the yard and I dismounted and started being really nice. There was no way I was going to flee and kick in the dog’s chase mentality. I was on the right side of the road and the dog was to the left. I hoped that he wouldn’t come across the road at me. I walked a little saying stupid things he couldn’t understand like “nice puppy.” This completely killed my average speed for the day too. I should have paused the Garmin.

My break came when just as the dog was coming out of his yard a car came down the hill and almost hit it. Brakes squealed, the driver stopped and I used the car as a shield to sneak away.

Reno Hill kicked up to 20% but it was a relatively short climb. At the summit, there are some Civil War markers and a “Private Road” sign which invited me to ride.

I turned left and was riding the very summit of South Mountain. A one-lane paved road with no traffic was great. I wondered where the road would end. I thought it was a U.S. Park Service one-lane road which perhaps made a loop. The grade was great for climbing. A lot of 12% with even higher numbers as well. After two miles I came to a dead end. Some government installation. Some secret government installation. I smiled for the cameras and turned around.

Back to the main road, I descended into the valley on the east side of the mountain. I missed the road that would have taken me to Chestnut Ridge and down to Harpers Ferry. But Rte 67 has a very wide shoulder and was a nice run into Brunswick.

As I approached Brunswick I saw the last road on the right and thought it would be fun to take it to Harpers Ferry if that’s where it went. It didn’t. It was a heck of a climb and ultimately I realized I was climbing for no reason that the road would not cross the mountain. I was right. I made a loop right back to Rte 67. Bonus miles.

I was not prepared for the distance with the climbing on this day. Or the wind. I climbed almost 6,000 vertical feet. Other than a small packet of Sport Beans (by Jelly Belly), I had no food and I ran out of water. I bonked and the thought of climbing back out of the river valley was too much. I pulled out my cell phone but no one answered my distress call.

My emergency funds consisted of two dollars in my saddlebag and were used to purchase a Snickers bar at the Exxon Station at the base of Harpers Ferry Road. Hunger solved. I made the 2-mile climb up the US 340 past Harpers Ferry to the plateau with ease.

The stats don’t show the entire trip because I reset the Garmin nine miles into the ride so I rode close to 66 miles. It was a good day but very tiring.