Watch a Grand Tour like the Tour de France and you will see different types of riders based on their body sizes. Of course, there are exceptions to all of these but the “sprinters” tend to be bigger guys with big thighs. And they’re the most daring of all riders. If they can stay together with a stage at the end, one of them will come out of the pack to take it at the line.

The “time trialists” are great at riding at their own pace and this often favors some of the heavier riders who aren’t knocked around by the winds. Riding by oneself you have no protection from the wind.

The “climbers” tend to be smaller riders who always have the best power to weight ratios. The rider who will win a Grand Tour is someone who can do all these fairly well, but usually, the Tour de France is set up to favor climbers. Fabian Cancellara recently won the Tour of Flanders and Paris-Roubaix and may be the best cyclist in the world right now but won’t even be in the discussion to win the tour. Climbers like Alberto Contador, Andy and Fränk Schleck, and, of course, Lance Armstrong, get everyone’s attention.

I have a perfect body to excel at nothing. I’m too big to be a climber although the satisfaction is like none other. I wonder if, in my 20s, my sprinting ability off the bike would have translated to being on the bike? I will never know. I do know that two foot surgeries, one knee surgery, and age have robbed me of any sprinting ability I once had.

If I could pretend for a second, I guess my best discipline would be domestique – hanging back and carrying water to my team leader. And my dream would be not to win the Tour de France but to be the Lanterne Rouge.

Last week, Scott Scudamore posted a ride I called the Scud TT (time trial). He described it as only having 30 minutes so he went out hard and hammered home and tried to beat 18+ mph.

Since Scott and I ride together occasionally and he tells me that I am a much stronger rider than he is, I thought I could go do the same ride and smash his time. So on Thursday I rode to his house, stopped my bike, and then took off on his route to mirror his exact ride. My time was better — 19.3 vs. 18.5, but I was hoping for 20+.

I rode about as hard as I could for 25 minutes or so. 8.5 miles. For all his talk about being a stronger rider, I think it’s a bunch of hooey.

My legs were shot after this effort.

I stayed off the bike on Friday but did referee a high school varsity soccer match at night. And then, Saturday…

Our group ride was canceled so we did our own group ride. Except David Vito and his friend, Vince, showed up on time trial bikes. These bikes are fast. They’re equipped with aero bars for leaning out over the bike although they don’t handle quite as well as a regular road bike. And thus David and Vince suggested we ride the W&OD instead of our normal road route.

There were strong headwinds, 20-30 mph, and I did my best to hang on behind as we headed from Reston to Leesburg. Although Daniel Kalbacher took a pull, I had no pop in my legs on this day. We ultimately did 32 miles at a hard pace and I did one pull on the way back, with a tailwind, and was gone after that.

When I got home I jumped in the shower which eventually became slumping into a hot bath. And fell asleep. Then I moved to the bed where I slept. Then to the sofa. I ended up sleeping most of the time from 4:30 p.m. on Saturday until 2:30 p.m. on Sunday. Different locations, but still sleeping. I had a fever and headache along with an upset stomach.

Two days later the pop hasn’t returned. I am still sleepy. And this is eerily reminiscent of one year ago when I had those fevers which I thought would clear up on their own. They didn’t. Ultimately, in diagnosing an e.Coli infection they discovered cancer. And now I am left to wonder, what is it this time? 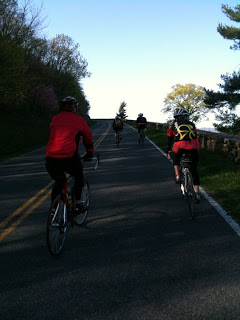 FRONT ROYAL, VIRGINIA
A group of eight of us who ride from The Bike Lane went out to Shenandoah National Park for “SkyMass” — a ride up Skyline Drive and over Massanutten Mountain. Many of the riders have been in the group rides out of Reston although I had never spent much time with them before – probably because I was always chasing them. It was cold at the start – low 40s. It was a beautiful sunny day but windy (blustery) which added to the chill. The cold wind would be with us all day. At the start I saw Dee Reeb who looked absolutely freezing in just a cycling jersey. I wasn’t sure what I would wear but since I had a jacket I gave her my warm warmers. And I’m glad I did. I think I would have froze if I had to watch her ride with no protection on her arms. We started immediately with a 6-mile climb on Skyline Drive at constant 6-7%. With no warmup in the legs, this little climb can hit you hard. But we all stayed together to Dickey’s Ridge Visitor Center. After the visitors center we developed more of a gap on the descent. We had a couple sick descents at more than 40 mph. I think the hardest I worked all day was closing a gap with three riders on one of the descents. Pedaling downhill, in the wind, at more than 40 mph and gaining slowly on the group in front is hard work. But I connected at which point I was in their slipstream. We reached Rte 211 at Thorton’s Gap. Panorama, a store on the drive, did not have drinking water, which appeared to be the story of the day. We simply turned and headed out to Rte 211 for the trip down the mountain. Rte 211 is a mountain road that crosses over the Skyline Drive from Sperryville on the east to Luray (Loo-ray) to the west. The upper most section has a number of switchback curves. One rider took off and no one went with him. The curves were fun to take but I felt trapped 4 or 5 riders back. At a safe opening, I opened up the pace to move to the front and which point we became “organized.” I glanced down as I was leaning hard in a curve – 35 mph. Awesome!

I was able to pull my group back up to our first rider and we regrouped at the bottom. We headed over some back country roads to our next store looking for water. We reached Hope Mills Country Store on Rte 522. Closed.

Not to worry. We could take on more water after Massanutten. We had a couple miles of gravel roads (what was up with that?) and then reached the 3-mile 12% climb up Massanutten. This could be a training ground for Mount Washington. The road was constant 12% although not as long. Or windy. But it was a nice climb with a nice descent on the other side. The trip down the west side of the mountain took us into the George Washington National Forest where we would stop at a campground looking for water. None.

Oh well. After this descent the road flattened out except for some rollers. Here, three of the guys forced a break while five of us sat back and tried to ride at a steady pace. We caught them at a country store rest stop at mile 62 complete with BBQ chicken. Two riders bought and the rest peeled off a piece or two. It was perfect. Can’t imagine eating an entire breast but just a slice was the right amount. And it was good.

Maybe best of all on this day – no road rage incidents. In fact, at one house we passed some folks were sitting on the porch and one guy yells out “GO USA!” Certainly better than being thrown at. It was a wonderful day! Note: All but second photo credit: Dee Reeb (used without permission but she wore my arm warmers for 84 miles) 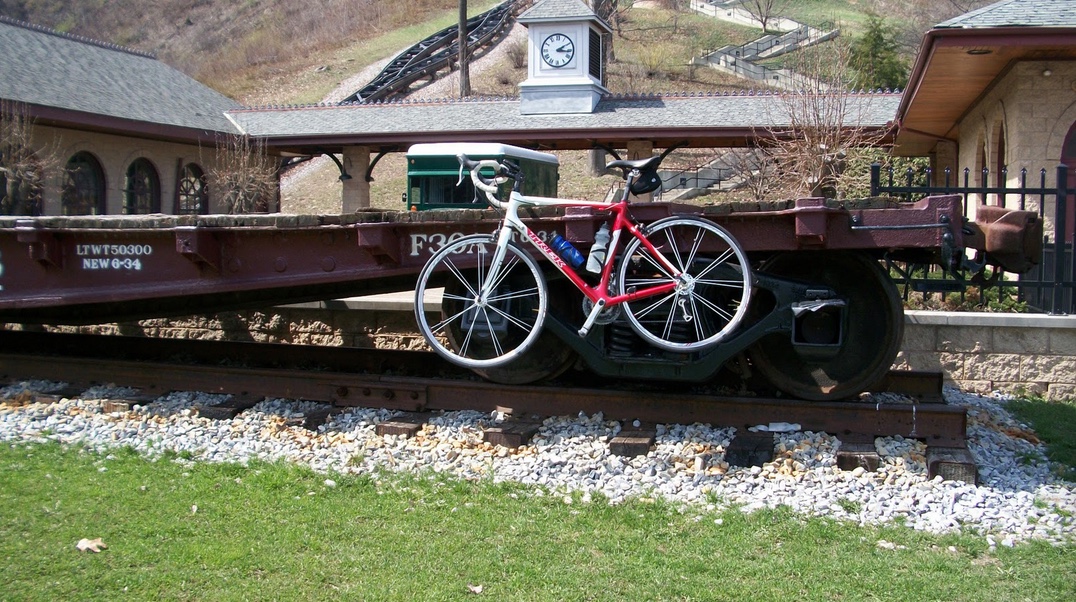 For five months I looked forward to this day – the day that I would be back on the bike and come back to these mountains.

Much of 2009 was a blur with an illness and then a diagnosis of cancer. Most waking hours were spent thinking of cancer and quite a few sleeping moments as well. The only time I was completely at peace was on my bike.

I came to these mountains to enjoy their beauty and to getaway. Generally, when I was on my bike I thought of nothing else except riding. It was especially so when I was in the mountains.

I rode “The Wall” by Horseshoe Curve four times last year. I also went to the White Mountains in New Hampshire and was able to lose myself in thought. Truly, I found peace on my bike and in the mountains.

I had promised three great climbs and three screaming descents on my planned 100 km route. As we waited at the top of the hill – this was a no-drop ride – I had to rethink the 100 km route as everyone complained about not being in riding shape. I adjusted.

Adjustment number one was we turned at Newry and started an 11 mile climb but at 2-3%, up to Puzzletown. In Puzzletown we turned on Valley Forge Road. Here I hit 48 mph – pleased, but then disappointed that I couldn’t push it to 50 mph.

We turned on Old U.S. 22 and began the seven mile climb to the top of the mountain. Once at the stone arch, we went through the Portage Railroad National Park and cut over to Gallitzin for a short break at a country store.

Then we earned our seven mile descent down Sugar Run Road. Three of us formed a paceline while the other three were content to ride it at a more reasonable speed.

At the bottom, we made our way over to Horseshoe Curve and split our group. A bit of a mutiny as Kelly Noonan and David Vito decided to sit out yet another climb, the steepest of the day too. The early season “big ride” was perhaps too much. But we pushed on.

I was only disappointed as this was the climb I wanted everyone to experience. Although I was saving the best for last, perhaps we should have gone up this climb first. But we got everyone up and over the top, back to Gallitzin and down Sugar Run Road again. Then we made our way back to the van.

In a recovery that is slower than I want, I can say this was the best day I have had since surgery. I really needed this day.

As for peace on a bike, Kelley remarked to me that riding in Altoona one can only think of the suffering on the climb or the fear of descending at breakneck speed. “No wonder you never thought of cancer while you rode here.”

Indeed. Just peace on a bike.