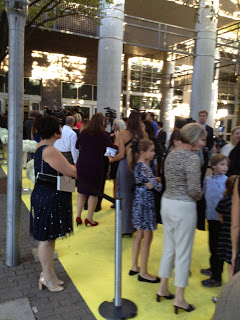 It’s not about the bike — is both a Lance Armstrong book title and frequent comment of cyclists. But it’s not about the cyclist either. Arriving Friday for the Livestrong Gala was a bit weird. With a damning USADA report just released outlining years of doping and Lance electing not to defend himself, this would be his first public appearance since the report. But nowhere would people be more supportive than at the 15th Anniversary Gala.

I was conflicted as I knew I would be. Lance, the founder of Livestrong deserved the benefit of the doubt. But fresh in my mind was the report detailing 15 years of cheating. Of lying. And with all his teammates lining up to take admit their part, the time was right for Lance to take responsibility. But he seemingly never addressed any of the allegations other than to rely on the tired statement that he passed 500 drug tests.

From backstage Lance appeared and the crowd stood. I wanted to remain seated but also wanted to see so I stood too. It was weird for me. During his prepared remarks he only talked about Livestrong. But there was a technical glitch so he and Matthew McConaughey appeared together and Matthew referred to the past few weeks. Lance said he has had better days – but he’s also had worse. That seemed sincere until …

…This morning I was in line with the 100 mile group to roll out of the Palmer Event Center for the Livestrong Challenge. I couldn’t quite see the stage but I could hear Lance. And he told the crowd that he has had better days – but he’s also had worse. It left me wondering if it was just a line that his PR people came up with.

Yesterday I made a “bib” in Memory of Jake the Hero and promptly hung it at Livestrong. I made another. I hung it there too. I made one in my hotel room and the wind tore it off. I made a fourth.

We rolled out of Austin on a warm morning. The temperature was already in the mid 70s. I never felt comfortable in a pace line and did very little riding on other’s wheels. If I was going to I was scared off around Mile 22 when some guys started to pass me and when one got right beside me to went down hard and took out three riders with him. He just missed taking me down.

The wind was quite strong but never so much that I complained. I love riding with the wind in my face — maybe not quite this much, but it was fun.

The elevation was listed as only 2,200′ for 100 miles which seems like almost any flat ride would have that. I expected more and believe that was off by at least half.

At Mile 48 we were riding on the flat plains when I could see cyclists ahead climbing a “wall.” My initial thought was “what in the hell is this?” followed by “alright!, finally a real hill.”

I’m not that good. But I like to climb. And this one was formidable. It wasn’t overly lengthy, maybe 3/4 mile, but it went from valley floor to what must be a butte summit and rose quickly. I had not used my granny gear and never thought I would but seeing this hill up ahead knew that I would.

Only about 200-300 yards in they had painted “16% grade” on the road and I’m sure it was. I would estimate that fully 2/3 of riders I saw were walking at some point. I passed many — slowly, but I passed. I would not let a hill beat me.
At the top was a rest stop manned by the Texas 4000 — the University of Texas group that bikes 4,000 miles from Austin to Anchorage. I had met some of the kids yesterday at check-in and a couple even called out my name. That was pretty cool actually.

The Livestrong Challenge is well-supported with a rest stop about every 10 miles. And I stopped at every one to fill my water bottles. At each stop I’m sure stronger riders kept on going so I may have lost my place in line with faster riders. Actually, when I lined up at the start I was at the end of the 100-mile group anyhow so basically anyone faster than me I probably never caught. I was here for a relaxing and reflective ride.

Around Mile 70 we pulled into Blanco Vista, a new suburban community. While 3,999 riders stayed on the street, I took to the path/sidewalk which was about 20 feet wide. I curved back and forth making for a fun ride. Riders looked at me leaning into the curves of the empty path. I told them this was lots more fun. I was feeling great!

At mile 78 I decided I could lift the pace a little bit. Once I hit the road I started pulling back people for the next 20 miles. Not once did I get passed by anyone. As I approached an intersection a policeman slowed me down to let out opposing traffic but told me not to stop and lose my momentum. Once traffic cleared he waived me on. I popped out of the saddle for an extra burst and he said “Wow! You look like you just stated riding.” I told him I felt good.

And I thought about that. Maybe all the fast riders started before me and were gone but this is the place where lots of distance riding kicks in. For those riders who were pushing themselves beyond a typical 20 or 30 mile distance, the body simply isn’t used to it. And I actually felt better at Mile 80 than at Mile 10. For him to recognize that meant a lot.

For the next 10 miles I just pulled people back until I came to an intersection with about 30 cyclists waiting. Once we got the green I moved past them all except one rider, Mark from Irvine, California. He came with me and sat on my wheel. He told me he was glad I came along. He said he just wanted to follow me (in  my draft) as long as he possibly could. I obliged. I don’t really know if it costs me anything in terms of energy doing all the pulling. Usually we would swap off but I felt that strong I did all the pulling. I even backed off at a couple of rises in the road so not to drop him.

With a mile to go in city traffic, we were in with other riders we caught. And after feeling good all day with no signs of cramping — it hit. A severe cramp in my right hamstring. I could not pedal. We were going downhill and I unclipped but any position hurt. I thought I might have to be sagged back with a mile to go. But I would crawl first. We came to the last light before entering the river side park where the finish was. I unclipped, put both feet down. When the light turned green the cramp was gone and that was that. Mark and I rolled into the finish, I stayed to the right for survivors.

At Philly the survivor’s finish was a separate chute to the right. And that was special. In Austin it was just stay to the right. Still the announcer called out my name and I was handed a yellow rose. I don’t know the future for Livestrong. But I hope it remains a vibrant cancer supporting organization. At the heart of the fund raising are the challenges. They are wonderful events – to ride – to reflect – to remember.

As for Lance, I had a great day on the bike. When people passed me I didn’t feel challenged that I had to beat them. And over the last 20 miles I averaged more than 20 miles an hour – solo — which is the best I think I ever have done at distance by myself (wind aided). But it never was about beating every person I passed. It was simply me having fun. I hope that someday Lance can ride a bike for fun. Maybe Lance can find peace on a bike. 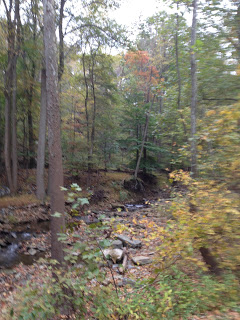 With a feeling that I left something unfinished, today was the perfect day to return and finish the Civil War Century. On September 8 I had begun the climb of South Mountain when severe storms hit. I cut the route short electing to return to the safety of the van.

A chilly morning, it was 48 degrees when I left home with a forecast of temperatures in the 70s. Arriving Thurmont, I discovered it was something called Colorfest Days and there was no free parking to be had anywhere in Thurmont. I drove up Catoctin Mountain Road about  two miles and decided I would pull over next to the stream, completely off the road.

I decided to leave the jacket and long finger gloves behind, believing in the forecast. A mistake.

I climbed over South Mountain, partly knowing where I was going and partly just exploring. I was surprised when I entered Pennsylvania that I was immediately in Blue Ridge Summit, a small town I had ridden through before on three occasions. And it made sense to me that this was the bailout route for the Civil War Century should someone on the full century route decide after 65-70 miles they wanted to go back to Thurmont. It really is all downhill back to Thurmont from here.

I had hoped the road markings from the CWC were still in place and they were. Except when they weren’t. At one intersection there was new asphalt down and my marking was gone. I went part on memory and part of feel. And I was right. Mostly.

Leaving Fairfield, Pa. I came to an intersection and did not see any markings and assumed no turn was necessary. After a few hundred yards I knew it felt wrong but I kept going. I sensed where Gettysburg was and figured I could still get there even though I missed the actual turn.

Arriving at the battlefield I got back on course. I found one of the markers and it had been covered in black. I wonder if the Park Service did that but wouldn’t be surprised if the CWC staff did that after the event out of respect for the battlefield.

Leaving Gettysburg I lost the trail, or so I thought, but picked it up again. The winds picked up and were in my face the rest of the day. And I was cold. Until about the final 10 miles, the temperatures held steady in the 50s and I didn’t have a jacket. I wasn’t feeling well. Only a 50-mile ride I had four packets of gels/GUs and ate them all hoping it would help. I was a bit light headed but managed to stay on my bike. Unlike most rides, a sense of relief came over me when I arrived back at the car. Fifty (miles) was enough. But five weeks after I started, I can now say I finished the ride. EPILOGUE – As a testament to how crappy I felt or how strong the wind was, I averaged a higher speed the first hour which included the 7-mile climb from the start than I did the last hour when it was flat.