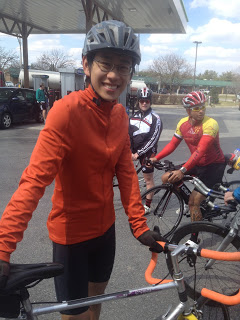 What a strange weather month it was. And it resulted in my least amount of mileage in any month in two years. Less than December. Less than January. And fewer than February.

March came in windy and cold and went out windy and cold. In fact, on March 6 we had a snow storm so “severe” that the federal government in Washington, D.C. closed all offices for 1″ of snow. Weather wimps.

In between I was able to squeeze in at least one ride a week but seldom more. It was my last month at work and I hated to inconvenience my van riders by taking my bike to work to ride at lunch. So I didn’t.

So it was good to get out today. I went to Columbia, Maryland and met up with some of the riders from the past and some riders for this year. It was chilly, high 40s going up to the 50s, and windy.

There may have been 20 or more riders and I was told to go with their A group. Thanks for pushing me, Kids!

I rode again with Patrick Sheridan and Mike, a coach for the group. We had a good time.

I also ran into Peter Bai, who I last rode with on Mt. Tam in Marin Co., California. It wasn’t far. But it was good to ride with the young kids again.