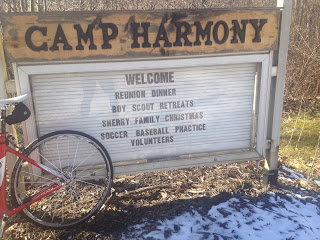 Mileage is not a goal. It is simply a byproduct of reaching other goals. And of having fun.

But I got sick. I picked up an upper respiratory tract infection which grounded me. Literally. I went nowhere. I couldn’t ride. Well, maybe I could but it was Zombie Riding. I couldn’t feel my body. So I rested.

December was lost except for a ride near the end of the month. At our annual Sherry family gathering at Camp Harmony near Davidsville, Pa. (between Somerset and Johnstown), Saturday brought decent riding weather. There were still some patches of ice or slush on the road but with temperatures in the mid 40s it was an otherwise beautiful day to ride.

My “camp” ride was a typical ride that defines me. First, it was solo as 90% or more of my miles are simply by myself. Second, it had a plan – one that didn’t work. Many of my rides go awry somewhere and, frankly, that is an enjoyable part of my riding.

I had planned to circumvent the lake (Quemahoning Reservoir) and put in about 30 miles. I didn’t want to go too much farther because I hadn’t been riding for most of the month. My fitness level was gone.

As I got to the east side of the lake I came to the “Green Bridge” which was an open grate bridge over one section of the lake. And it was gone. In its place was a new bridge that wasn’t yet opened. On this day there was no construction taking place and I looked for a place to safely cross walking my bike but it did not look safe to cross. And a freezing lake is the last place I would dare slip and fall.

(Why I didn’t take a picture of the new Green Bridge, I do not know. Probably because I have taken so many pictures of the lake that I thought “nothing new here” except there was. There was ice formed in one section of the lake which would make a beautiful photo but I didn’t stop. It’s a fairly large reservoir with a decent size dam at the far end with a pretty impressive spillway.)

After a couple of minutes of looking at the bridge I followed the detour sign. I didn’t know where the road would lead but that’s sort of number three – go where the road leads. And it led up. Up the hill I went, crossed under US Rte 219 and as I neared the summit of the climb I reached a farm. Protected by a big dog. Running loose. I stopped. I turned around.

And that was number four. Go where the road leads but be prepared to change your plans. Especially where big dogs live. So I turned around and went back past the lake. I followed the road to Holsopple.

As I was riding through Holsopple I spotted a train station. A train station! Now there is one active track here but who knew there was a train station? And it was in excellent condition. I turned down a side street to get a closer look then saw a local. I asked him about the station and we probably talked for 15 minutes or so.

And that was number five. Stop. Talk to a local.

The neighbor wasn’t real thrilled with the station. Privately owned he said, he thought the families who maintain it could use their money in a more humanitarian way. Perhaps so but I love seeing old buildings maintained. I listened. I can’t even say we had much of discussion.

Leaving Holsopple I rode to Hooversville. It’s only four miles but with no shoulders and into the low afternoon December sun. I was not comfortable.

Halfway between the two small hamlets is a very small one named Blough. Only a handful of houses are here but there’s a sign proudly proclaiming Blough to be the home of former major leaguer, Frank Kostro, who earned a World Series championship ring playing for the 1965 Minnesota Twins. I just know I hadn’t heard of him which means he wasn’t one of the 20 player cards I had for my Strat-O-Matic game for the ’65 Twins.*

In Hooversville there is a swinging bridge over the Stoney Creek River. I love riding my bike over that bridge. No pictures. Which was maybe number six. Drain the battery in the cell phone. Oh well.

After a month without any miles (just 144 miles) it was great to be back on the bike. I will miss setting a mileage total for a year but mileage is not a goal.

“Holsopple Historical Building, Inc., our official name, is a registered nonprofit corporation composed of citizens who are interested in keeping our town’s history alive. We have a board that meets monthly; we also schedule activities throughout the year to involve the community.

“We’ve been working for over 20 years to restore the station. It was literally falling apart when we took over. We have replaced the roof, replaced the bay window, rewired and repainted the station, and installed a new floor—supports, joists, and all—in the freight room. We’ve raised money through chicken barbecues, basket parties, etc., but the largest amounts we received has come from Somerset County’s tourism grants. That enabled us to add outside lighting, sidewalks and landscaping, and paint the interior.”

Their eventual goal is to open as a museum. It is a beautiful historic building. If you’re in the area check it out.