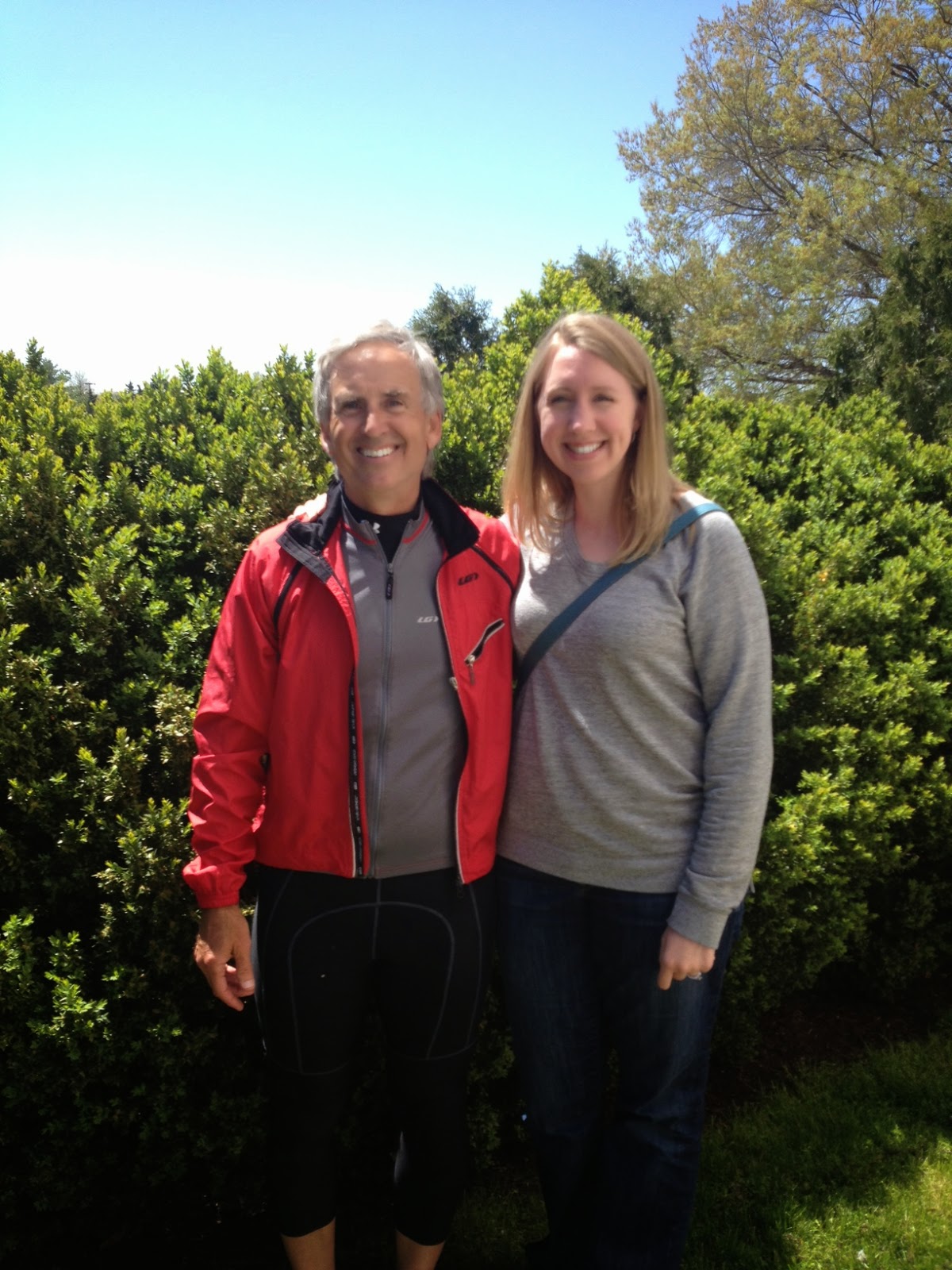 I saw a post on Saturday on my friend, Brad Hancock’s, Ocean to Bay 100k ride which asked “what was your speed?” Too many times cyclists, especially road cyclists, measure rides in terms of speed.

Unfortunately, I read years ago on RoadBikeRider.com the then author stating that “no ride that doesn’t average at least 15 mph is worth it.” I haven’t been able to shake that notion but on some of my favorite rides I have averaged under 15 mph. I have been with a slow group or by myself and just took the time to appreciate what was around. Today was one of those rides.

I did a modified “Airport Loop.” The full loop encompasses the Washington & Old Dominion (WOD), Custis, Mount Vernon, and Four Mile Run Trails. This one was a little different.

When I reached Columbia Pike I turned onto the pike and rode to the Sheraton Pentagon City. Note to self: Columbia Pike is not a great bike route. There I met cousins Christy and Evan Larson. Although I have corresponded off and on for years with Christy, this was our first time meeting in person.

From the Sheraton I was a little unsure where I was going. Well, I knew where I could go but decided to try something a little different. I dipped into the Pentagon parking lot not knowing if there was a good way out to the north but knowing I could cut across to the Mount Vernon Trail.

In the parking lot I met two young people on City Bikes studying a map. I rode up to them and asked where they were looking to go. They said Arlington National Cemetery so I told them I would take them there.

They were from Zurich, Switzerland. I told them I would be there in July. They told me to have fun and eat plenty of chocolate. Don’t worry my friends, I will. I dropped them at the cemetery main gate then followed a bike path to the Netherlands Carillon which is between Arlington Cemetery and the Marine Corps Memorial (Iwo Jima). There were beautiful vistas here, overlooking the Potomac River and Washington, D.C. I stopped to “smell the roses.” Actually I took a lot of pictures. Rather than held over to the Custis Trail I decided to see where the bike lane in Rosslyn (or is it Ballston?) took me. Other than the 4-5 cars that were stopped (parked) in the bike lane, it was a pleasant trip through the city — a little different than the trail that I am frequently on. In Benjamin Banneker Park in Falls Church I stopped and watched a few minutes of U10B soccer. Well, mostly I watched the referee and was glad he wasn’t one of mine.

On the section of the W&OD that is parallel to Shreve Road, I was passed by two riders. Granted, one was when I came to a stop to cross the road and the first rider did a sling shot move around me. My thought was they were big riders, maybe at the start of their ride. I didn’t try to stay with them. I was on a relaxing ride.

But in another half mile I saw them start the climb up to I-66. I knew with a 100 yard head start I wouldn’t see them again but I jumped onto the road and and quickly overtook both. Now that felt good. And I never saw them again – I left them behind. On a day in which I rode slow, enjoyed the scenery, met cousins, I surprised myself by overtaking these two strong riders.

In the end, a great day. I didn’t even average 15 mph. Not all rides are about speed. But this was a great ride. 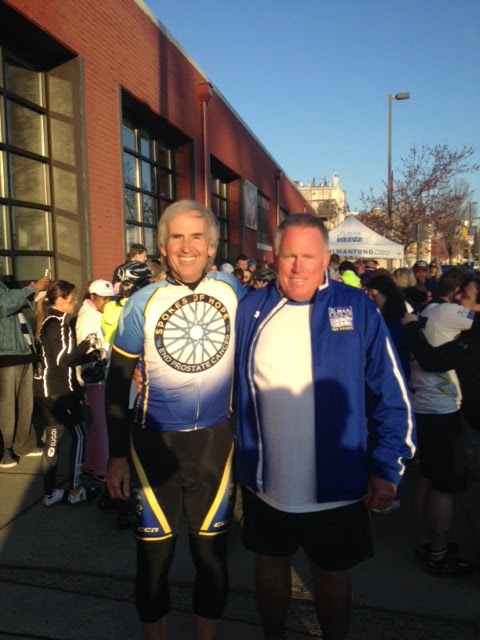 I went to Baltimore to see a couple of friends who were riding (mostly in a car) from Baltimore to Key West. I did this ride last year, and while I couldn’t ride this year, I wanted to see this year’s group.

I invited two cancer warriors to join me on the trip and then I didn’t go. Cindi Hart, from Indianapolis, and Dave Wagner, from Orange, California were there and ready to go. I hadn’t met Dave in person although we have been cyber friends for four years and it was great to finally meet him in person.

The riders formed a dedication circle where each rider could offer a dedication for the day. Dave surprised me by dedicating his day to Jake the Hero Grecco. And I already knew that Cindi would dedicate the day to Jake since she showed me the flag she is carrying to Florida. She did surprise me by also dedicating the day to me. I only wish I was in the circle so there would have been three dedications for Jake.

It was strange, almost surreal, seeing riders only in a dedication circle. Any cancer ride I have participated in everyone present was invited to join in but this group chose to be exclusionary. Well, I’m sure the group didn’t make that decision.

The group left Race Pace Bicycles and we rolled down to the Inner Harbor. By “we” I mean, yes, I rode with them.

I had thought about what kit, what cancer kit, to wear and decided against my kit from last year’s ride. One reason was if I showed up wearing what everyone else was wearing I did not want to be confused with being a rider for this year. So I chose my Spokes of Hope kit to honor Cindi and because, well, it’s awesome.

As we rode to the Inner Harbor, Cindi and I slowly made our way to the front of the group to pick up the pace because it was cold and we weren’t producing body heat. At the Inner Harbor Groups #2-5 loaded their bikes to drive to their starting points. Since I was parked in Baltimore, I jumped in and rode out with Group #1.

The group I rode out with included Paul Lemle, Leslie Nissemberg, Dean Halberg, Marti Howard plus one other rider, and was supported by Dave and Alex Wright. Leaving Baltimore we went over one cobblestone street plus an open grate bridge. Paul flatted before Mile 5. What a start!

Once finally rolling, Craig Babst, another alum from last year’s ride (and my 5th cousin), drove by us as we were on the BWI Trail, honking his horn and yelling support.

We rode on trails I had never been on and time was rolling by. You could see the flags whipping but felt no wind. I knew we were being pushed by a tailwind and I would fight it going back. I looked for a spot where I could say goodbye but they kept pushing on. We approached Dave and Alex at an intersection on the trail and I don’t think our group slowed down. I announced loudly I was leaving and turned around.

Then it was the adventure of finding my way back because I knew I could not trace back the way we came. Nor did I want to ride across that rough bridge. I figured the BWI Trail would take me to a spot I knew and it did, but not before getting run into by a girl on a longboard who fell and took a nasty spill right in front of me. She didn’t hit me but her longboard did.

But I was at a spot I could find my way. It was chilly, and the winds were strong going back but it was a day supporting cancer fighters. Any day like that is a good day on the bike.