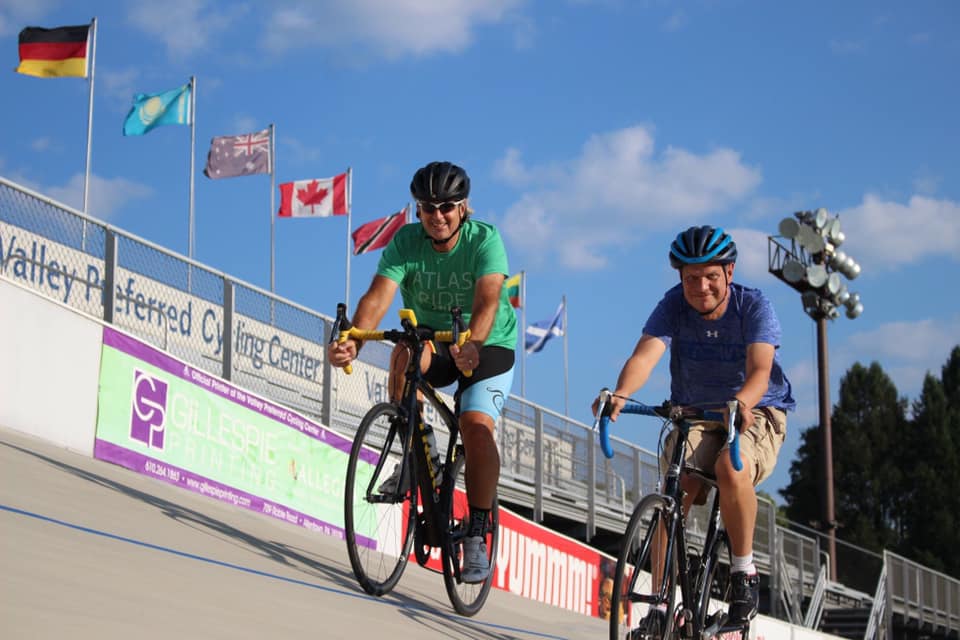 This was the 10th year that Spokes of Hope was invited to Valley Preferred Velodrome in Trexlertown, Pa. In previous years, we had childhood cancer survivors “take a lap” against cancer sometime during the evening races.

We were the pee-wee football team that gets to play on the big field for five minutes of the half-time of an NFL game. Or the midget hockey team that gets five minutes between periods at an NHL game. There is also some down-time between races at the velodrome and Spokes of Hope filled the gap by introducing the childhood cancer survivors.

But it was always a blast for us. For Cindi Hart, she just glowed when she could teach the young kids how to ride on the track even if it was the flat ground-level apron. But that would not happen this year.

In the past it has never been smooth. We usually didn’t find out until an hour or so before the program when we would go on. But riding the track was only half of it. Spokes of Hope loaded up a trailer and brought a full display and store from Indiana to sell at the velodrome. And some of the mission was just support for people coming by.

Call it a miscommunication, but we arrived only to be told that we would not be riding on the track. Uh-oh. No worries. We still had the tent plus there was an entire evening of bike races.

My cousins from New Jersey, Stacey Gravina and her family, always come over to see me. That always makes it special. Stacey was the mother of Jake “The Hero” Grecco, one of our heroes.

But this year was especially hard. I had hoped that my cousin, Kay Walborn, would join us as a cancer warrior. Instead, her name was the latest to be added to the Spokes of Hope banner that Cindi carries with her on rides. Kay lost her battle five days earlier.

One of the people that came through was young Lexi. She was diagnosed with Acute lymphocytic leukemia (A.L.L.) in February, 2015, finished treatment May, 2017, and relapsed December, 2017. Lexi – we ride for you!

If Friday is all work, especially if we don’t get to ride), then Saturday is all play. Each year we meet for a group ride out to Topton and back. We meet at The Market Cafe which is quite a neat place situated right next to two train tracks. Unless you’re a railfan, which I am, you probably don’t want to be sipping on a cold drink when a train rumbles by.

The ride is truly one of my favorite rides of the year. It is just fun. But it is also a ride with other warriors – a brotherhood, and sisterhood, that can’t be explained and we don’t want others to join. But if you are diagnosed then we welcome you.

We had another great Saturday morning ride. Weather was perfect. Company was superb. I love my Spokes of Hope family.

Each year I look forward to my ride from Somerset to the family reunion near Punxsutawney (which is actually Winebark Park in Canoe Twp., near Rossiter).  When my parents lived in Friedens I barely had enough time to get there. But when they moved to Somerset I just didn’t have enough time to travel there safely. The road from Somerset to Friedens at 6:00 a.m. is just too sketchy.

Rather than leave in the dark, I checked with my nephew, Josh Reese, and parked at the Kia dealership in Richland. It was easy-off, easy-on for access from US Rte 219. When I arrived there was a heavy fog and I delayed my start until I felt safe enough.

Leaving the Kia parking lot is a little like riding the Thunderbolt roller coaster at Kennywood Park in Pittsburgh for the first time. Rather than start by pedaling, I almost could take a half pedal turn then coast for three and one-half miles.

Of course, I didn’t do that. It was all downhill and I pedaled most of the way, only occasionally dropping into a tuck and coasting. What a great way to begin a trip. Rather than go through Johnstown as fast as I could I went sight-seeing, mainly taking some photos of the Inclined Plane.

The road (Pa. Rte 271) out of Johnstown in through East Conemaugh and up a mountain. But it seems to be graded at a consistent grade, I would guess around 4%, and I always find it easy (although my climb data may disagree). Traffic was mostly good as I went through Mundy’s Corner, Nanty Glo and Twin Rocks up to US 422 at Belsano.

I was on US 422 for less than half a mile then turned on (and stayed on Rte 271). I was surprised about a mile in to pass a bike trail crossing. This was an extension of the Ghost Town Trail. It looks like a nice trail, very lightly traveled, but best for bigger tires and not this road bike. At least for long distances.

This is always my favorite part of the trip – the 13 miles to Northern Cambria. Rte 271 has good pavement, little traffic, and is easy pedaling, with only one climb along the way (up to Nicktown). I could smell the corn in the field. And occasionally, manure.

I stopped at Duman Lake for a porta-john and also a photo op. There is a climb to Nicktown which I only later learned was a Strava Segment. I didn’t know I was racing. I will have to come back tomorrow and put up a decent time.*

At Nicktown is a four mile descent to Northern Cambria. On past rides, I have hit 49 mph but today only went to 44 mph and got in a tuck. That was fast enough (and was also the speed limit – 45). I have found that since my crash in Ohio I am more cautious than I have been and I have never been careless.

I stopped in Northern Cambria and saw my cousins, Don and Nancy Lowmaster, and their daughter. I couldn’t stay long but enjoyed the short time we had.

As I was leaving Northern Cambria I was passed by a truck pulling a trailer with a small tractor on it. The driver got out and as I approached, motioned for me to pull over. This did not feel like an angry setup and I complied. Then he asked if I was “the Barry Sherry.” Well, I admitted as much. But who was that stranger?

The driver was Mike Peronne, the former postmaster in Cherry Tree, Pa. We had never met but we had talked and he knew once a year I rode through here. And he said “and I saw your hair and figured it was you.” LOL. We talked for about five minutes before we both headed up 219 towards Cherry Tree.

The rest of the trip I thought about that interaction with the stranger. Those last 20 miles are the hardest as the road turns heavy and there is a lot of climbing. Steep climbing and grades that don’t remain constant.

The last couple miles are on Porterfield/Canoe Ridge Road and pass a few Amish homes. A little girl in a blue dress excitedly waved to me. Of course, I waved back. As did a boy about 10-12 years old. And a man climbing a ladder. It is always enjoyable riding through this stretch because the Amish are always so friendly to me. I think they relate to cyclists as they ride bikes and we face the same dangers on the road they do whether it’s by bike or by horse. And I am the stranger to all of them.

_____
EDIT/EPILOGUE – I did go back on Sunday. Can’t believe a crappy time on Strava would bug me enough but I could not leave those two climbs (the other Station Road coming out of Twin Rocks) with such bad times. So on Sunday, I went hard, first on Station Road Climb. Since I started at Krispy Kream and basically went downhill to Twin Rocks, the “engine” wasn’t warmed up. Still, I lowered my time from 7:38 to 5:30, a reduction of 23%. When I got to Blue Goose Climb I was warmed up. I went hard and lowered my time from 8:26 to 7:10 which was only a reduction of 15%. Aaah. I’ll never get KOMs on these climbs but at least my name isn’t associated with sucky times anymore. And on my way back, I went through a new segment that I wasn’t aware of. My time sucked. Must go back again.

At least I finished with a good recovery drink. In a cone.