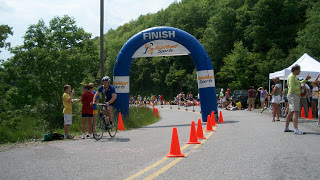 One year later I look back on what I listed would be my goals for 2010.* I made some and I missed some.

Most notably, I missed riding with Lance Armstrong in Austin. I set out to be the best fundraiser ever for LIVESTRONG but along the way discovered the journey was more important than the destination. Raising money for the fight is important but my website became less about raising money and more about caring for others in their fights. Was that wrong?

In a year of great memories, here are my Top Ten Riding Moments of 2010

My first century after cancer, there would be four more this year, this one was also the toughest. It featured “rollers” until Mile 60 then a 3-4 mile climb at 12%. Rollers again for 40 miles then a four mile 12% killer climb to Mountain Lake (think Dirty Dancing). It was my first real test to see if I could regain my fitness during this year of recovery after cancer surgery. It wasn’t great but I passed the test.

I always wanted to see a bear in the wild. I thought as much as I drive through the mountains, someday I might. I never expected to come across a bear when I was on my bike. But on July 4, my niece, Emily Cramer, and I turned a bend while on the Great Allegheny Passage in Maryland, near the Pennsylvania border, when we saw a bear about 75 yards ahead. We stopped. It looked at us and decided it wasn’t interested.

Riding in the Allegheny Mountains around Altoona brought a special peace for me last year while starting my journey with cancer. My first real ride “back” during recovery had to be in Altoona and I took six friends with me on April 4. It was the best day I had so far since surgery last November.

I started to record my mileage for each ride in 2009 but quit when I was diagnosed with cancer. Prior to this year I rode around 2,500 miles annually. Five thousand miles was not a cycling goal but it was a byproduct of feeling good only when I am on the bike. After the LIVESTRONG Challenge in August when I passed 3,000 miles it dawned on me that I could reach 5,000 miles although I knew in late fall it wouldn’t be easy. But I also knew that if I pushed through the darkness in the fall and continued to ride far on weekends in October and November I would make it. On November 27, I went to Oysterburg Road in Oley, Pa., site of the toughest hill on the LIVESTRONG-Challenge Philly course, to symbolically finish my fight against cancer, although the journey continues.

My “Quest for 50” (mph) was something I always am seeking to do and I even went to U.S. Rte 30 near Stoystown, Pa., in August just for that purpose. And failed. I did hit 48.9 though. But then, at the Civil War Century, out of nowhere, I hit a downhill and hit 52 mph. Nothing else that day could ruin it, not even a mechanical (flat tire). Going 50 mph on a bike is both exciting and scary. If you let yourself think about what would happen if you crashed at that speed you will never go that fast. Or you will crash.

Being attacked (and scared) by Rottweilers is nothing to record as a Top Ten Moment. However, I was able to bike from Somerset to Punxsutawney two weekends in a row in August. The distance, without a wrong turn, is 80 miles. But my encounter with these beastly dogs also led to me being saved by Biscuit, the Yorkie, and a news article about my adventure.

I have done a number of centuries (100 mile rides) but never lined up at the start with a friend. Ernie Rodriguez joined me for this 103 mile ride over South Mountain, to Sharpsburg, Md. (Antietam), then to Gettysburg. The route was outstanding.

I could have gone faster, and Ernie said near the end he wanted me to jump in with some faster riders and leave him behind. I have certainly felt that way when just hanging on with other riders – “please, go ahead without me.” But this was Ernie’s first 100-mile road bike ride and there was something about riding together with a friend that is more enjoyable than adding one mph to your average speed.

The day before the Mount Washington Auto Road Bicycle Hillclimb, I went for a warmup ride in North Conway, New Hampshire, just to keep the legs loose. Two guys came up behind and asked “mind if we jump in?”

How many times have I been in a big event and some old rider appears stuffed in an HTC-Columbia, Radio Shack, Discovery Channel, or Garmin kit? Many. The biggest offenders are the Basque who all wear Eskutel-Escadi kits. So to see two riders in Garmin wasn’t a complete surprise. But I knew in an instant that they were the real deal.

Walker Savidge and Peter Salon were to ride the next day in the race and had been dropped off in town. “Sure,” I said. “After a picture.” I pulled and they stayed on my wheel for about seven miles. Great kids. I wish them the best in their pro careers.

This is overwhelming. Simply by bugging my friends they donated more than $6,500 to LIVESTRONG this year and $10,000 since I was diagnosed with cancer. I am speechless.

The physical part should have been much tougher but I don’t recall it being that tough. My legs were powerless but the will was strong. I raced in the MWARBH the day before, drove nine hours until 1:00 a.m., slept for four, then went to registration at LIVESTRONG. And I biked 100 miles in a steady, and sometimes, heavy rain. My first attempt was 07/07/07 and ended up with the race canceled due to dangerous weather on the mountain. Perhaps it was just as well. I don’t know that I would have made it and whether the failed attempt would have defeated me or encouraged me, I don’t know.

In 2008 I made it, albeit with a crash, and returned in 2009, battling cancer. But 2010 was the year that I would return cancer-free. A different attitude surrounds my attempts now. I have gone from wondering if I will make it to simply how long I will suffer. I guess I ran out of numbers. Make this a “Baker’s Ten.”

Words cannot describe how much fun I had riding in France. Cyclists are respected by motorists. And dogs. Climbing the Tourmalet and Col d’Aspin the day of the Tour, we were cheered by spectators who were waiting for the real riders. I met 24 other cyclists and four great guides with Trek Travel. And one English-French-American. Having Ashley meet me in Paris at the end of the tour made it even more special.

I can’t wait to return.

As for 2011, I’m not declaring any goals other than being cancer-free. For the first time in four years I’m not sure about going back to Mount Washington although I imagine I probably will. I would love to go to France again. I am always willing to support LIVESTRONG but maybe in a venue other than Philly (Davis, Ca., or Austin). World’s Most Beautiful Century (Lake Tahoe)? Ride the Rockies? RAGBRAI? The list is endless…

*Mount Washington Auto Road Bicycle Hillclimb, a week of riding in France, the LIVESTRONG Challenge ride with Lance in Austin.