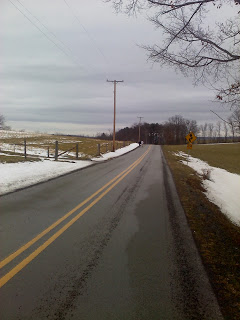 The temperature was 37° when I headed out for my New Year’s Day ride. The road in Camp Harmony was mud covered by ice. I tried to stay on the side in the mud rather than risk spilling on the ice.

Memories abound at Camp Harmony. Last year I was one month removed from cancer surgery. My exercise last year was to walk up Plank Road during a blizzard. And dealing with post-surgical issues.

This year I had to ride. Bundled up, I started up Plank Road to Slagle Hill Road. It started raining. I thought my ride would be cut real short riding in a cold rain but I lasted longer than the rain.

My descent down Slagel Hill could have been fun but the road was treated with a dirty black gravel mix, presumably with salt. But unlike treated Virginia roads which are noticeably white, these roads were black. In short, the descent was pretty treacherous.

At Mile 4 I stopped to photograph the steel grate bridge, presumably called the Green Bridge since this was Green Bridge Road. At Mile 8 I could have turned up Plank Road and made a nice 10-11 mile loop but I continued to Hollsopple. I had ridden this stretch three times last summer; once in a Somerset-Johnstown-Ligonier loop, and twice on my way to Punxsutawney. It’s much nicer in the summer.

I followed Whistler Road next to Stoney Creek. Stoney Creek flows from here to Johnstown. A cyclist on this road is a rare site – even more a cyclist in January.

At Hooversville I saw a suspension bridge and knew I had to follow it. It crossed the Stoney Creek over to Hooversville Road.

I then took Hooversville Road up to Plank Road then back to camp just as the rain started to come down harder. A 20-mile loop is a great way to begin 2011!

My local cycling club, Potomac Pedalers Touring Club, has an award, which may be tongue in cheek, but it is called the Iron Crotch Award. This recognition goes to anyone who rides 5,000 miles in a year. And I qualified.

To qualify, I had to submit a simple questionnaire.

Maybe the worst thing about riding far in one year is the desire to surpass that the next. It’s going to be tough. I tried to recreate 2009 with Garmin and log entries and it appears that I rode 2,100 miles the year before. So double mileage in one year. Not too shabby, I’d say.